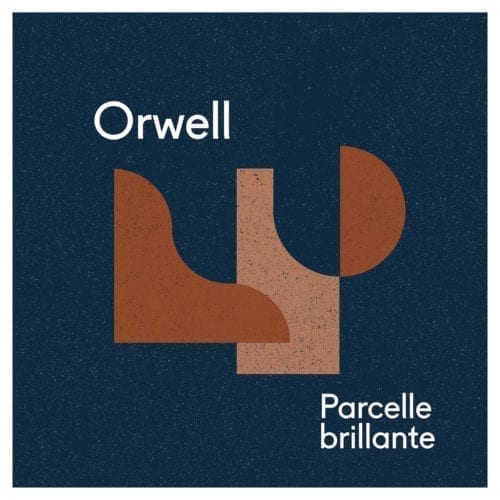 Straight outta Nancy, in the north-east of France, here comes Orwell again, a band led by the master melodist Jérôme Didelot, a worthy heir of Bacharach, Left Banke and other instigators of chamber pop. With a creative career spanning some 20 years and a reputation across the Channel among connoisseurs of fine songwriting, Orwell launched its seventh release, Parcelle brillante, at the end of April.

On the programme, eleven pieces enriched with arrangements for violin, cello and flute, electronic passages, as well as saxophone – thanks to Antoine Arlot – vibraphone and marimba ornamentations. The song “Jamais assez” is very representative of this sonic refinement. Two singers accompany Jérôme Didelot: Armelle Pioline on “Jamais assez” and Sugar Me on “Immature”. You can also hear something akin to a sitar on “Dors encore”. There is an instrumental, “Dérivation”, whose retrofuturism will remind the more mature of John Barry’s theme from the TV series The Persuaders. The ensemble reminds us of Yo La Tengo’s elaborate pop – especially “Pourquoi savoir?” – and the productions of Flavien Berger.

The title of the album refers to “Bright Segment”, a short story by the prolific science fiction and fantasy writer Theodore Sturgeon, published in 1955. Jérôme Didelot drew on Sturgeon’s themes to provide the material for the lyrics of the title track, “Les mains de Bianca”, and “Lone”, on which Didelot’s son reads an extract from Sturgeon’s novel More Than Human.

This brilliant parcel is a marvellous illustration of what results when  a literate approach is taken to song creation. It’s not likely pure chance that Didelot used the surname of one of the most outstanding writers of the 20th century as his songwriting pseudonym.