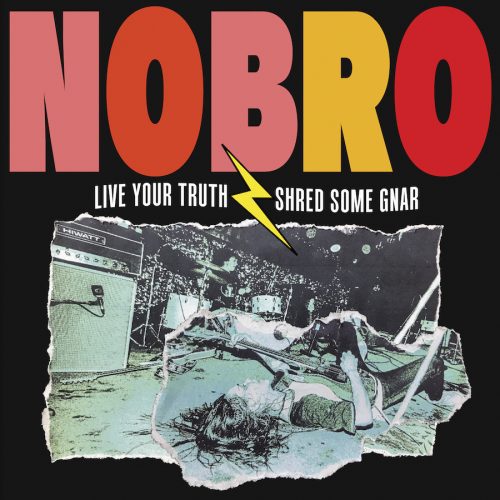 Originally the brainchild of fiery vocalist and bassist, Kathryn McCaughey, NOBRO’s sound has doubled in power and efficiency with the addition of guitarist Karolane Carbonneau, drummer Sarah Dion and keyboardist/percussionist Lisandre Bourdages. Those who have been following the Montreal band for a while quickly realized that they had made a solid leap forward with the (too) short Sick Hustle EP released in April 2020 on Dine Alone.

With this second effort for the Toronto-based label, the four NOBRO badasses refine their style and sound, while continuing where they left off with Sick Hustle. On Live Your Truth Shred Some Gnar, produced once again by Thomas D’Arcy (July Talk, The Sheepdogs, Yukon Blonde) and mixed by Dave Schiffman (Vampire Weekend, Adele), NOBRO benefits from an even more polished recording, with McCaughey’s voice clearer and more forward, which doesn’t force her to get unnecessarily loud like in some of the band’s previous tracks. The 7 tracks of the mini-album show that the band is ready for the big leagues, abandoning a little more the disheveled garage-punk of its first years in favour of a vitaminized hard-rock, with leaded riffs and unifying choruses, without however losing the attitude and the energy of its beginnings.