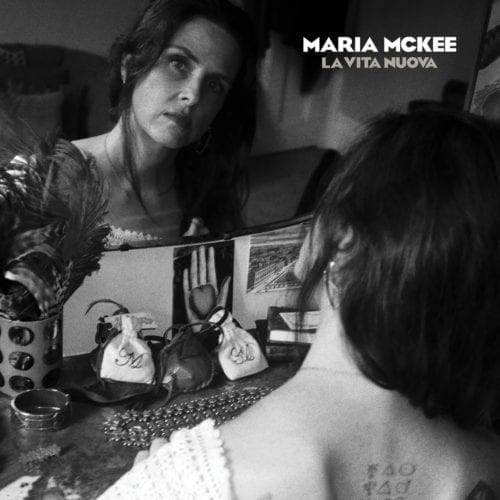 Maria McKee recently stated that she’s become aware of the torments of midlife, a passage where the grim valley of death creeps into one’s peripheral vision, and the mourning of what beauty and youth once made possible. It is, for her, a season that evokes Death in Venice. Ms. McKee, a Los Angelena-cum-Londoner, found few uplifting words, at a time when the cholera epidemic in Thomas Mann’s famous novel is being replaced by you-know-what.

McKee thus emerges from semi-retirement to launch, 13 years after Late December, an opus of flamboyant lyricism entitled La Vita Nuova, a direct homage to Dante’s work on unrequited love. Incidentally, Christine and the Queens recently released an EP with the same title, likewise lifting from Dante. As McKee tweeted, who would have thought that two “lesbian rock” (as she calls it) albums with the same title would be released at the same time? For in this “new life”, Maria claims her pansexuality, like Christine and the Queens, and ardently supports the LGBTQ cause. La Vita Nuova, in this sense, is an identity manifesto in operatic mode.

Ms. McKee’s journey would grip any rock geek who read it. An early starter, Maria wasn’t even 18 when she laid the foundations for the group Lone Justice, which quickly acquired a more than enviable reputation, opening for Tom Petty and U2, releasing two albums and receiving accolades and support from Jimmy Iovine, Little Steven, Dolly Parton, and Linda Ronstadt. After Lone Justice disbanded, McKee created several albums and collaborated with, among others, Dwight Yoakam, Robbie Robertson, Steve Earle, Gavin Friday, the ex-Talking Heads, U2, Stuart A. Staples, and the Egyptian rock band Massar Egbari.

Let’s add that her half-brother, the late Bryan MacLean, was part of the very mythical band Love, whose influence on La Vita Nuova can be heard in the songs “I Just Want To Know That You’re Alright” and “Page of Cups”. This last track also exudes the hint of Fairport Convention, whose late singer, Sandy Denny, is one of Maria McKee’s claimed influences. On “Ceann Bró”, Maria tackles the occult, one of her preoccupations. Across the songs, we get caught up in the variety of baggage they bear: romantic, melancholic, gothic, cathartic, baroque, and rocking.

Many qualities contribute to make La Vita Nuova a remarkable work: purity, vocal strength and accuracy, competence of the arrangements (“Courage is exemplary in this sense”), the integration of influences (including Joni Mitchell on “Ceann Bró”), hybridization of idioms (opera and gospel on “Let Me Forget”, and the elevation of the lyrics. At the mid-point of her life, Maria McKee is in the midst of her creative prime.