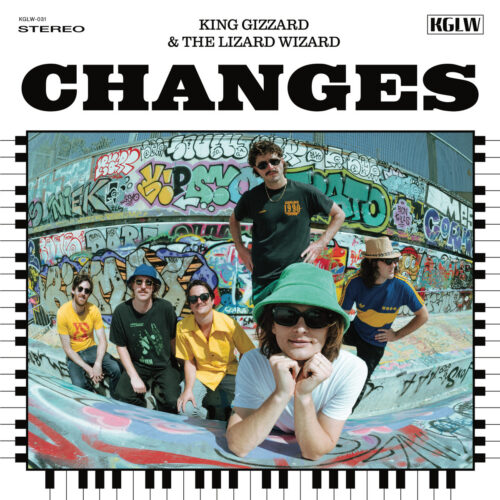 King Gizzard & the Lizard Wizard are at it again with their fifth release this year. For a band as prolific as King Gizzard, every new release sets in motion the law of diminishing returns, but Changes marks the psych-rock outfit’s jazziest excursion yet and stands out as a singular record in their sprawling catalogue.

According to frontman extraordinaire, Stu Mackenzie, the seeds for Changes were first sown sometime in 2017, but the band did not feel equipped to manifest their vision just yet. Changes comes after a gestation period of nearly five years, and it shows in the detail-rich environment the band has created. Drawing its name from the concept of ‘chord changes,’ the album explores more harmonically adventurous ground whilst playing to their experimental and pop sensibilities.

Sonically speaking, Changes sees somewhat of a departure from the usual inclusion of electric guitars and fuzz pedals and is oriented around keyboards and synths. The cover art says as much. While the band flirts with a warm ‘jazzier’ vibe this time around, Changes sounds unmistakably like a King Gizzard record, harkening back to earlier releases like Sketches of Brunswick East. The band has always held the uncanny ability to reinvent themselves without losing their essence. If in Infest the Rats’ Nest, the band made a pastiche of thrash metal, or in Flying Microtonal Banana of Middle-Eastern psychedelia, Changes is effectively the King Gizzard take on ‘70s soft-pop and yacht-rock.

The core of the album is the opener, “Change,” a bold 13-minute odyssey that introduces the themes and variations that are to ebb and flow throughout the album. Mackenzie himself envisaged “Changes” as something of a song cycle structured around the concept of switching between two different chords not necessarily related to each other by key. Part of the reason the album took so long to make lies in the difficulty of navigating these frequent chord changes. Much to the credit of Mackenzie and co., tunes such as “Hate Dancin.’” and “Astroturf” with their easygoing vibe and catchy melodies, obscure the deft craftsmanship underneath. Changes is a very welcome addition to the King Gizzard discography, and the band would do well to continue exploring the nexus of where complexity and simplicity meet.