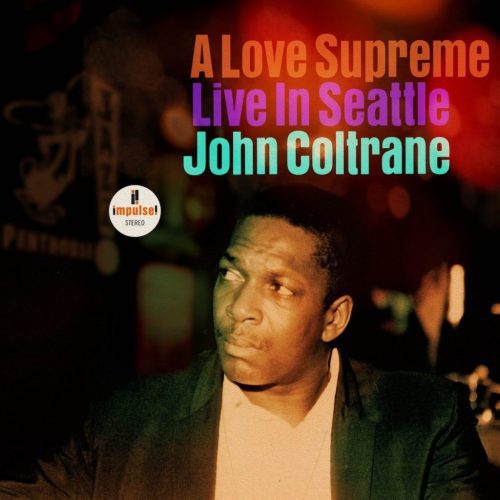 For many jazz lovers, the album A Love Supreme is the magnum opus of the great John Coltrane. It’s true that the record, recorded in 1964 with what is known as his classical quartet—McCoy Tyner on piano, Jimmy Garrison on double bass and Elvin Jones behind the drums—can be rightly considered as one of his discographic summits, so imposing is its striking splendour. However, Coltrane and his companions only rarely played the material in front of an audience. For a long time, A Love Supreme, in Antibes 1965 was the only live version available on record. However, musician Joe Brazil (who accompanied Coltrane on his album Om) had tapes of a performance that took place in Seattle in October 1965, three months after the one in Antibes. To our great delight, the Impulse! label is now releasing the content.

Those expecting a faithful reproduction of the original version of the work may be a little unsettled, since there are some notable differences between the album and what Coltrane and his cohorts did with it on stage in Seattle. First of all, the number of players has been increased: tenor sax player Pharoah Sanders (then a protégé of the great master), alto sax player Carlos Ward and a second bass player, Rafael Garrett, joined the ranks. Then, the length of the cycle was almost doubled since, in addition to further developing the existing pieces, Coltrane added interludes which are in fact improvised parts during which the drummer and the two bassists perform. Finally, the nature of the music played is of a completely different order than what the audience had heard on their vinyl at home. The percussion is much more present and the playing of the saxophonists is much more vehement than the audience was expecting. In fact, the original suite was mostly used as a framework for Coltrane to push his research towards unheard sounds even further. The themes played at the beginning of each section are recognizable, but the artist and his band take the music to an ever more ebullient and wild place. One senses that Tyner and Jones are not in their comfort zones, that the rest of the band is forcing them to butter up more than they usually do. These two would leave the boat a few months later. Nevertheless, for the listener in 2021 who can finally take the measure of the earthquake that shook Seattle more than 50 years ago, this new album is the occasion to discover the missing link that unites the sidereal beauty of A Love Supreme to the free supernovas that were to be found on records such as Ascension or Meditations. As much from a historical point of view as from a strictly musical one, this recording is essential!