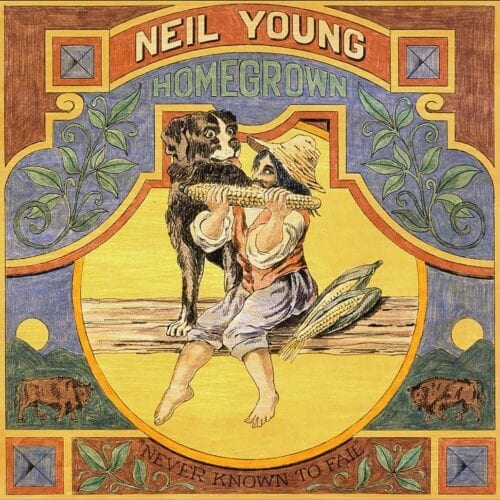 For a few years now, Neil has been releasing his archival material. Rumour has it that he’s got safes full of it. So here’s Homegrown, which gathers 12 pieces recorded between June 1974 and January 1975, that is to say, between the releases of the remarkable On the Beach and the powerful Zuma. Once Homegrown was finished, Young had decided to put it in the freezer and to release instead Tonight’s the Night, recorded two years prior. Neilyoungologists will note that some of the songs on Homegrown have appeared on other albums over the years, such as the triple compilation Decade (1977), American Stars ‘n Bars (1977), Hawks & Doves (1980), Ragged Glory (1990) and Chrome Dreams (2007).

Let’s have a look at these twelve excerpts from Neil’s friend’s archives: “Separate Ways” is a rather gloomy song, where the late Levon Helm holds the rhythm fast with his inimitable syncopated playing, and the late Ben Keith, one of the original Stray Gators, makes his pedal steel weep. “Try” is a bit more upbeat, with backing vocals by Emmylou Harris and saloon piano in the last third. “Mexico City” is short, moving, and stunning in its destitution. “Love Is a Rose” is the catchiest piece on the album. “Homegrown” is a hymn to amateur cannabis cultivation. On “Florida”, Neil relates a dream in which gliders hover. “Kansas” is like a sister to the aforementioned “Mexico City”, where the guitar replaces the piano. “We Don’t Smoke It No More” is a fat blues, while “White Line” is a delicate acoustic duet with Robbie Robertson, still a member of The Band at the time. “Vacancy” is similar to the gravelly rock that Neil was already doing with Crazy Horse. “Little Wing” is a short ballad, not to be confused with the song of the same name by Jimi Hendrix. “Star of Bethlehem” is a country-rock tune enhanced, once again, by the voice of Emmylou Harris.

Let us thank Uncle Neil for taking good care of his archives.