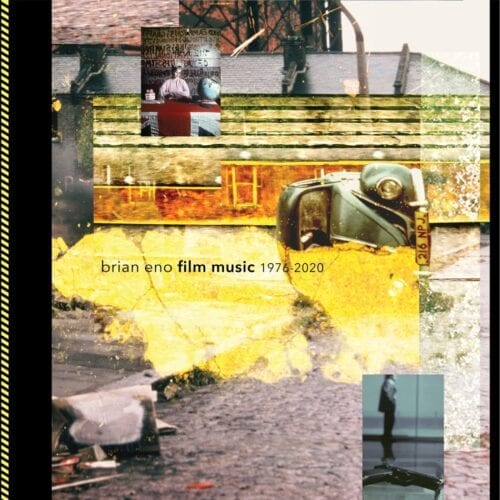 Although originally written for imaginary films, most of the pieces on his 1976 release Music for Films disc have subsequently enlivened a host of short and feature films, not to mention countless student and amateur productions. Since then, Brian Peter George St John le Baptiste de la Salle Eno has been in great demand and has composed hundreds more for film and television. Over the years, directors David Lynch, Dario Argento, Peter Jackson, Ralph Bakshi, Mamoru Oshii, Steven Soderbergh, Danny Boyle, and Derek Jarman, to name but a few, have called upon his services.

This anthology is a collection of those he considers to be the most successful. The crème de la crème! This is something to delight the fans, especially since a good number of them had never been released on record before. Some of them are however familiar to us, like “Deep Blue Day”, which, after having been used in the film For All Mankind to accompany the conquest of the moon by the Apollo programme, with Daniel Lanois’ pedal steel twanging deliciously, brightened up the famous filthy-toilets scene in Trainspotting/ There’s also “Beach Sequence”, which embellished a passage from Antonioni’s Beyond the Clouds and appeared on the album Passengers: Original Soundtracks 1, a joint project of Eno and U2. But that doesn’t matter, all the less so since, the most beautiful thing in all this is that the pieces are very skilfully arranged in the master’s good care, mixing eras, one highlighting the other, alternating suspense and weightlessness, tense climates and vaporous atmospheres, dark textures and luminous sounds, for the greatest pleasure of fans who shouldn’t be surprised to find themselves playing the album in a loop.

In the middle of all these ambient pieces, there’s even a lightly country-style cover of a ’60s R&B hit, “You Don’t Miss Your Water”, which the late Jonathan Demme incorporated into his comedy Married to the Mob. The soundtrack has long since been sold out and has become a collector’s item, precisely for this much-loved song.