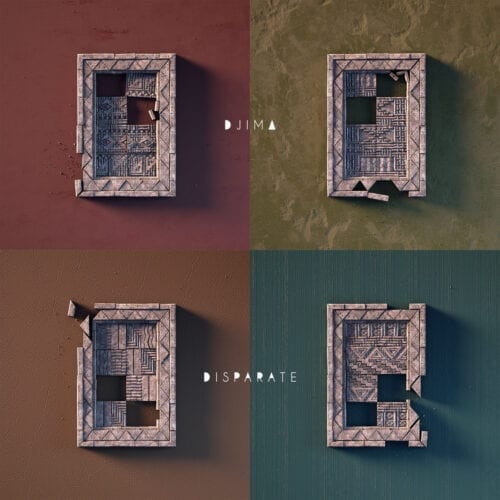 For his first EP, the result of a long process started several years ago, Djima offers us four very personal tracks, windows open on his origins. The cover, made by the 3D artist Eddy Loukil, is the right illustration. Djima – of the Kotokoli ethnic group, the name given to a child born on a Friday by his mother from Togo – spent part of his life in Europe, particularly France, where he co-founded Les Effusions, a multidisciplinary festival in Normandy, before settling in Montreal. Like a self-portrait using sound as raw material, Disparate is a delicate and harmonious fusion of the producer’s musical influences. The chosen visual aesthetic suggests that textural efforts will give colour to the compositions. There’s an Afro-house spirit present with the use of traditional West African songs on “Korondo”, meaning “a ritual to keep the rain from falling”. The trumpet in “Meraki” transports the listener into a jazzy nebula, while “Skindoger”, translated as “the rumble of a distant thunder’, naturally points towards a dub techno atmosphere. For “Falsopiano”, synthetic tribulations and percussion reveal a deep-house gem. Djima draws his inspiration from cultures other than his own by searching for track titles in an encyclopaedia of foreign words that have no equivalent in French, investing his compositions with a certain poetry. Released on the Kizi Garden label, the EP completes a particularly careful and coherent catalogue.