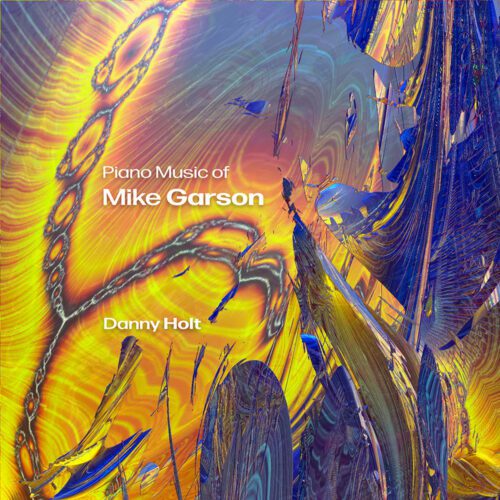 Mike Garson’s musical universe is both strange and familiar at the same time. The man best known as David Bowie’s “Piano Man” (he recorded more than 15 albums with him) has always had a firm footing in classical music. Pianist Danny Holt has the reputation of being a performer of exceptional technical ability. Still, the works of Mike Garson presented here have given him a hard time!

The nature of the technical difficulties in Mike Garson’s music stems from his particular compositional technique. Garson works in real-time on a Yamaha Disklavier instrument. His compositions, informed by the sound worlds of Rachmaninoff, Ligeti, Ives, Gershwin, Bach, and many others, are essentially improvised on the instrument and recorded. If it were only for the already imposing difficulty of reproducing these sound traces of a creative thought running at a hundred miles an hour, Holt would have had quite a challenge. But Garson, depending on his mood, sometimes speeds up the tempo of the work to a fizzle of notes almost impossible to render by a human being with only ten fingers at his disposal, unlike a Disklavier for whom such details matter much less.

At times, Holt asked Garson to choose whether he wanted all the notes in a piece to be played, but slower, or to change the score and play it at the diabolical tempo Garson wanted!

David Bowie’s Aladdin Sane where you can hear Mike Garson’s playing. Listen in particular to the fabulous and legendary solo from 2:20!

With all that said, what does Garson’s music sound like? As I said at the beginning of this article, it sounds like a strange yet familiar universe. One recognizes the styles of the composers ”honored” by Garson, but as if they allowed themselves astonishing digressions here and there, in tempos, accents and harmonies. This is of course Garson’s personal touch, composing improvised tributes in real-time, which the Disklavier memorizes for posterity, as if the improvisations of a 19th-century saloon pianist had precisely perforated the music paper of the player pianos on which they grooved, and could be played (or not) again today.

Harmonically, Mike Garson favors sometimes a broad tonality, often romantic or post-romantic. One thinks of Prokofiev, but at the same time of Godowski and of course Bowie!

Danny Holt is indeed an outstanding performer, as he breathes a hectic life into these pieces while maintaining a technical precision so impeccable that it must be exhausting.

This is a very interesting exploration of a sound universe that is both accessible and demanding. A must-hear for any versatile music lover of 20th-century music and its sources.