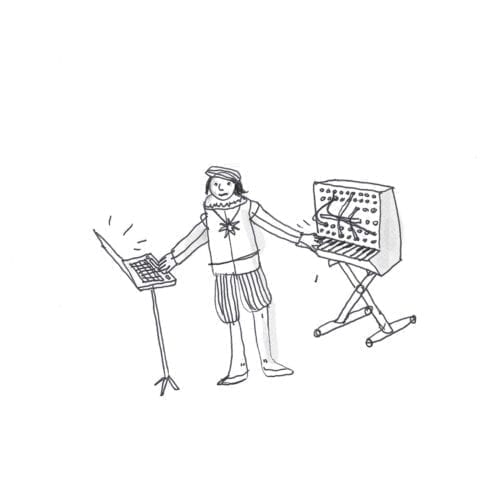 The clever, highly conceptual, and eternally sympathetic Montrealer Minière pops up on the radar with a little something he tossed together, nothing too ostentatious despite its monarchical resources, yet entirely welcome.

The conceit was to rifle through the dusty stack of folios to which the title refers, a sort of crowd-sourced, canonical compendium of royally ratified Iberian Renaissance music, as a catalyst for impulsive creativity in confinement.

Great liberties are of course taken with the source material. It’s hard to imagine the original manuscript for “Harto De Tanto Porfia” included directives regarding gloomy post-punk bass and cavernous drums, or that “En El Servicto De Vos” was intended as a celestial space-rocker in the soft, warm French style. Nor is there a hurdy-gurdy or bladderpipe to be heard here, which is probably all for the best (a clavichord might have been welcome, but the vintage synths more than suffice).

In fact, the five-track EP is pretty much unrecognizable as any sort of exercise in auditory archaeology. Instead, it’s a batch of long, patient, instrumental meditations on simple, bittersweet motifs, each with its own appealing character. Crafted for the common folk, fit for a king.