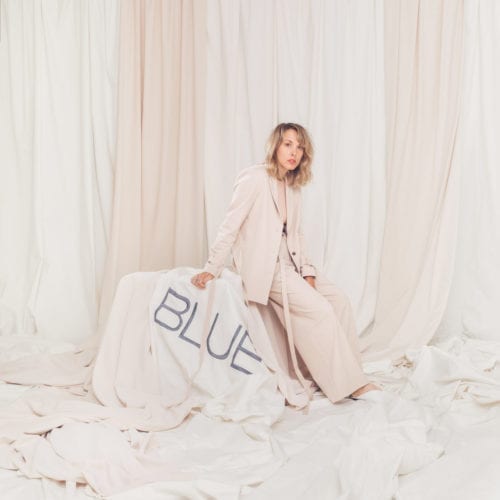 Valland, a patronymic derived from the Latin “valens”, means resistant, robust and strong – in short, valiant. Valland is here an aptonym since our Rosie is very brave: this Granbyenne by origin, after having attended the l’École nationale de la chanson in her hometown in 2011-2012, created an EP of the same name in 2014, a full-length album in 2015 (Partir avant), two other EPs in 2016 and 2017 (Nord-Est and Synchro), and most recently Blue, her second full-length.

When, like Rosie Valland, you’re born in the early ’90s and the Universe predestines you to melodic, sometimes energetic pop, you risk being influenced by Oasis and Jean-Jacques Goldman. And you find yourself in a cohort of gifted singer-songwriter-composers who, in addition to Rosie, include Lou-Adriane Cassidy, Mélanie Venditti, Ariane Zita, Julie Blanche, Lydia Képinski and Sarah Toussaint-Léveillé, among others.

Rosie produced Blue with Jesse Mac Cormack, who has supported her since her debut. He has also worked as a producer, accompanist and arranger for Emilie Kahn, Helena Deland, Mélanie Boulay, Patrick Watson and Philippe Brach, all of whom are in great demand.

Listening to the nine pieces featured here, one can hear that the lyrics are concise, direct and serene, that the music is delicate and that Blaise Borboën-Léon’s string arrangements are impeccable. The rhythm is slow, except on “Forçons les tiges”, with its threatening riffs, and on the electro-percussive “Loin”.

Rosie Valland’s songs are here freed from the moral suffering in folk mode that often tinged them before. Instead, a delicate and peaceful, cutting-edge pop creation, beneficial to the ear as well as to the mood, has taken shape.