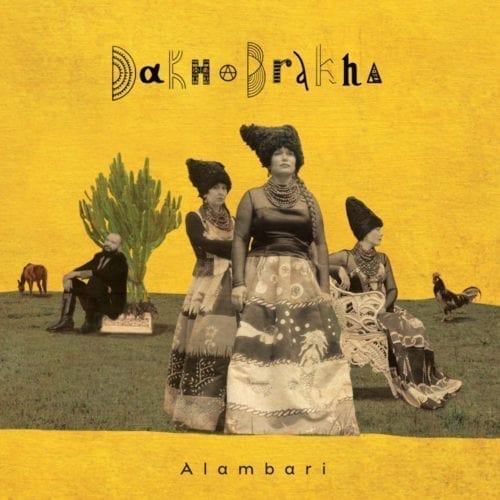 The name means “give and take” in archaic Ukrainian – which is odd for such a remarkably uncompromising act. It’s also a reference to DAKH, the contemporary arts centre in Kiev from whence the band sprang in 2004. DakhaBrakha is the brainchild of avant-garde theatre director Vladyslav Troitskyi, the band’s backstage mastermind to this day. The theatricality extends beyond their striking attire and stage shows, and shapes the music itself, a Brechtian revision of Gogol Bordello’s Slavic folk-punk cabaret, boasting a stripped-down, street-corner version of Le Mystère des Voix Bulgares.

Their reconfigured village tunes from various provinces of the Ukraine, alongside crafty original concoctions, range from sore, incremental laments (“Sonnet”, and the haunting title track) to the rousing stomper “Lado” and the cartoonish chaos of “Vynnaya ya”, an exploding cuckoo-clock of a track. Accordion, cello, and bass drum are the essentials of the quartet’s all-acoustic instrumentation, though they’ll employ whatever they find useful, locally sourced or otherwise. Vocally, the foregrounded female trio with a gruff masculine foil proves dynamic, the band’s forte even. There’s more than a hint of the lascivious running through the whole thing – from the sultry “Torokh”: “And we, unmarried fair maidens, are just having fun.”