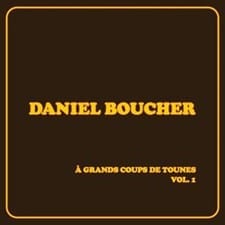 If Gaston Miron had been a rocker, he would probably have looked like Daniel Boucher. Of course, he would have had to do a hundred or so sit-ups every morning to get his belly back in shape, but nothing prevents imagining him, our thundering poet, Gibson SG slung over his shoulder, haranguing a rapacious audience. Nevertheless, Gaston has transmitted to Boucher, through poetic metempsychosis, his way of handling lexical matter. This was apparent as early as 1999, with the release of Dix mille matins, Daniel’s masterful debut album.

Now Boucher is offering us his seventh album, À grands coups de tounes, vol. 1. He persists in his familiar modus operandi: to use the rock tricks devised by the pioneers from the mid-1960s to the early 1980s in a very judicious manner. Seven songs that were recorded over a few years in southwestern Montreal at the Tone Bender studio of musician Jean-Sébastien Chouinard, who co-produced À grands coups de tounes, vol. 1 with Boucher.

With its nine minutes and eighteen seconds, “Les grands déçus domptés du grand lundi docile” takes on the allure of one of those guitar jams that intertwine thickly like Neil Young and Crazy Horse circa Everybody Knows This Is Nowhere, before closing with an African chant. The ballad “Je te cherche encore” represents the paroxysm of romanticism. Daniel then declares “Les gâteaux de fête” for a lover, against a country-blues backdrop. In “Grand beau grand gars”, one hears a tribute to Boucher’s teenage son, as well as to the guitar harmonies of Alex Chilton and Big Star. During the six minutes of “À grands coups de coude”, it grooves deep while a barber’s clipper plugged into a tube amp stimulates our ears. “L’ange” contains one-third each the anger and pain of a wounded man, then two-thirds recuperation among the fireflies at Roxton Pond. Boucher ends it all with a lysergic wish entitled “La paix dans le monde”.

Daniel Boucher has been too quiet in recent years. Let’s hope that À grands coups de tounes, vol. 1 will bring him back to the forefront.