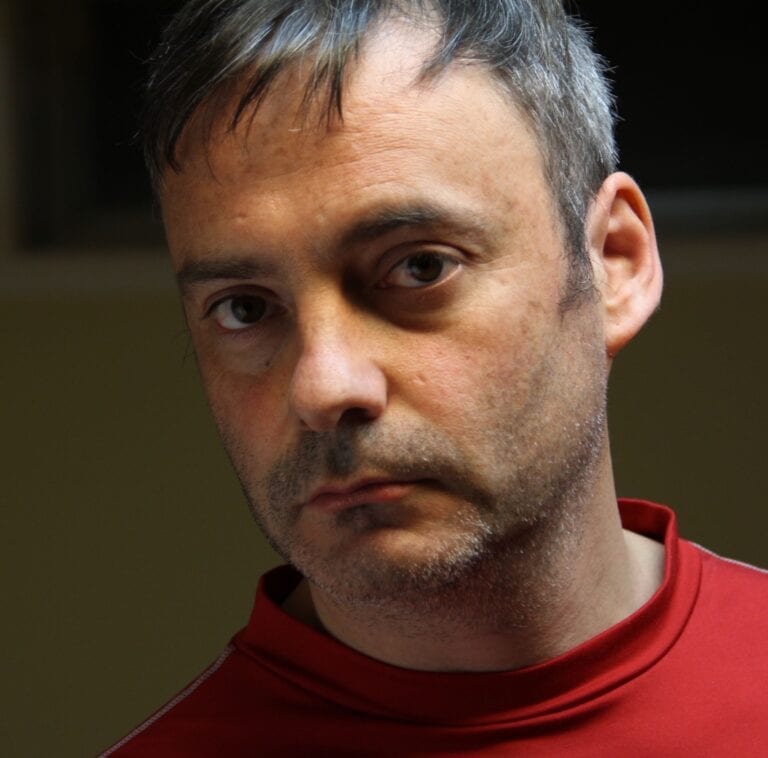 With Clastic Music, presented at MUTEK, Vigliensoni creates an interactive show in which he frees himself from the computer.

Based in Montreal but originally from Valparaiso, Chile, Gabriel Vigliensoni enjoyed some success in his native country in the late ’90s with the alternative band Lucybell, and then the electro-acoustic band Mismos. This former student at the Santiago Conservatory began his solo career with Nata in 2004, an album on which he experimented with techno and breakbeat. He also explored vocal-oriented songs on The Animal Kingdom in 2014, and blended krautrock and electronic music with Jaguar the following year. With a PhD in music technology from McGill University, Vigliensoni has pursued in-depth studies of the design of new music interfaces and music recommendation algorithms.

For his appearance at MUTEK this year, Vigliensoni presents the premiere of Clastic Music, a largely improvised performance for which he teamed up with fellow Chilean Eduardo Pérez Infante to create a web application that allows the audience to modify the visual component of the show as they wish. PAN M 360 spoke with the musician, artist and researcher to discover the meaning of his unique approach.

PAN M 360: Reading your press kit, we learn that you’ve touched on all kinds of music before coming to the Clastic Music project. Can you briefly retrace your career for us?

Vigliensoni: I come from Chile. I started there. I participated in a few bands, doing mostly rock and pop. I was playing keyboards. Some of these bands were popular, in a way. We worked with EMI, Warner, and others, and eventually I started liking more electronic music, stuff like Autechre, Aphex Twin… Then I started working with some friends making electronic music, but mostly with instruments like vibraphone, stick bass, double bass, and things like that. But I’ve also been playing always with synthesizers and drum machines. I did a path from playing with physical instruments to computers, and then I went back to more physical instruments because I don’t like to just stand there playing with my computer and a mouse. I like to embody music.

PAN M 360: Your new project is called Clastic Music, what’s it about?

Vigliensoni: “Clastic” is a geological term in which different layers of rock and sediment make something new. The analogy for music is that I am building from other musicians’ work to create my own. I’m actually learning the intrinsic features of rhythms in order to create a machine-learning model, an AI model which I play with. So for MUTEK, I will play just unreleased material and it will be very improvised in a way.

PAN M 360: You’ve given serious thought in your studies and research to the design of new music interfaces and music recommendation algorithms. Can you tell us more about this?

Vigliensoni: I am always curious about new ways of playing with music. I think there’s always space for improvement in the way we interact with music. As I said, I’m not using the computer a lot when I play because I don’t like how it interacts with music. I don’t like to look at a screen in order to play music. In that sense, I’ve been building this device which allows me to explore a data set of rhythms in a different manner. The way I work with this is that I collect a bunch of clips of rhythms and then, by using a machine-learning device, I learn the characteristics of these rhythms. And then I map these rhythms into an imaginary space with which I can explore in real time.

PAN M 360: How long did it take you to develop this process?

Vigliensoni: I’ve been working on this since last March. The tricky thing about software development is that it’s endless. You always have a new thing in mind, and then another one. So there is a very fine balance between actually making music and coding something. But the nice thing is that one informs the other. If you just keep doing software development, it’s kind of boring and pointless, but if you are switching from one to the other, it gets better.

PAN M 360: Your biography states that you are turning the process of making a record into a playground for learning and experimentation. How do you achieve this?

Vigliensoni: I don’t like to repeat myself in the workflow of creating music. The way we usually work these days for making music is that we go to a computer, we open the Pro Tools or Ableton or whatever we want to use, and then we start building our song, and if we don’t like something we just undo it and then start again. But I’ve been getting sick of that workflow, so what I’ve been exploring lately is getting rid of the computer and just doing it à la old school, in a way You record a track but you cannot just undo it, and you have less possibilities of editing. To do it properly, you have to rehearse more. I use the computer to write emails and other stuff like that, but I don’t want to use it to make music.

PAN M 360: You prefer to work in a more physical way, finally.

Vigliensoni: Exactly. For me, music is physical. Yes, I like ambient stuff, but I like to be more on top of things. So this idea of changing the way in which I interact with music is important to me, finding what the best workflow is that fits certain ideas, or what I can do to make this process different…

PAN M 360: You teamed up with Chilean artist Eduardo Pérez Infante to create a web application with which spectators will be able to modify the visual components of the show.

Vigliensoni: What we want to do is, while my music is being played, you can have a browser open and the visuals will react to the music. There is a component of interactivity, so the audience at home can, for example, move the mouse from their computer and change the visuals in real time along with the music. When MUTEK offered for me to play at the festival, I started to think, what can we offer for a hybrid-mode festival? To be honest, I think streaming is very boring in general, so I thought of offering a kind of browser-based game or web application to enhance interaction with people. That’s what we will try to deliver. So, you can be your own VJ in a way.

PAN M 360: Do you intend to make this project available after your performance at MUTEK?

Vigliensoni: Yes. The idea is to release the music as a web-based application. I don’t really believe in those streaming services, not at all in fact. I like the concept of having access to a large library of music but don’t like the concept of neverending recommendations, so that you don’t really know what’s actually playing if you’re not in front of your computer. I have a PHD in music recommendation so i know a bit about that! And I also don’t like the payscale for musicians. So I’m even considering not even releasing this on Spotify or iTunes, because there’s no point. It’s much better on Bandcamp, because you have control of your stuff, you receive much more money, you can have all your discography, you are in charge of uploading your music, you know exactly at which level it will be played back…  So having a way to allow people to play and interact with your music, I think it’s interesting, you’re offering something different. I believe it’s important to think about new ways to bring music to people and give them a different concert experience, because it’s quite possible that the situation we’re in right now will continue for a long time.