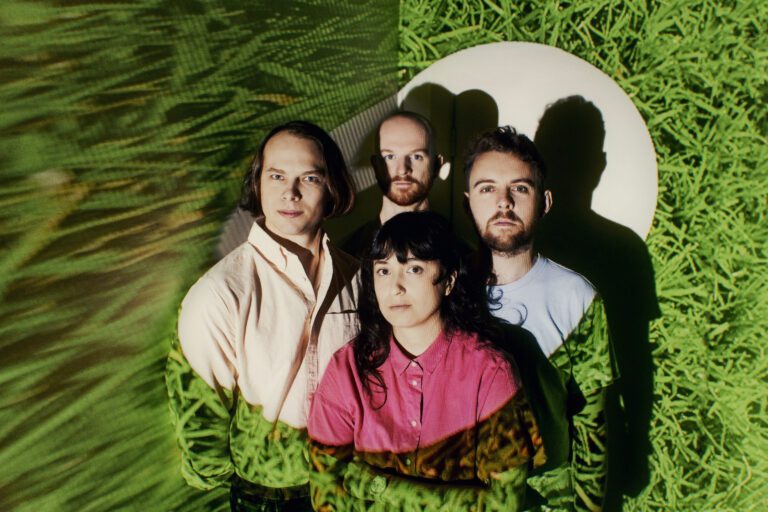 The Beths: Power-Pop to the People

Evoking power-pop fills my music geek’s heart with joy. Alex Chilton and Big Star, Cheap Trick, The Smithereens, Weezer’s first three albums, Mathew Sweet, The New Pornographers, and so many other bands. Uplifting stuff that makes you want to hop around and sing along, Thus The Beths, a relatively young band from Auckland, New Zealand, are a true blessing. I would go so far as to say that The Beths are making some of the best power-pop of the Anglosphere, these days. Elizabeth Stokes (vocals and rhythm guitar), Tristan Deck (drums), Jonathan Pearce (lead guitar and vocals) and Benjamin Sinclair (bass and vocals) are creating songs that are as addictive as they are memorable. Moreover, they play really tight and smile a lot. Pan M 360 got caught singer-guitarist Liz Stokes somewhere on the Eastern Seaboard, a few days before The Beths’ Montréal gig.

Pan M 360: Hello Liz, if my sources are correct, you must be somewhere between North Carolina and Virginia.

Liz Stokes: Yeah, so we are in North Carolina we played in Durham last night, and we’re in Raleigh Today.

Liz Stokes: Yes, it’s been nice. We’re playing maybe seven or eight more shows in North America. Then 10 days later we have some dates in Australia and New Zealand.

Pan M 360: Will this be your first visit to Montréal?

Liz Stokes: We actually played there in 2019, the year before the pandemics, at Pop something?

Pan M 360: Pop Montreal? (Writer’s note: the venue was Casa del Popolo) Your third album, Expert in A Dying Field, will be released in about three weeks. I’ve heard the singles (“Expert in a Dying Field”, Silence Is Golden”, “A Real Thing”, “Knees Deep”). Can the listeners expect a ratio of tender and rocking songs similar to Future Me Hates Me and Jump Rope Gazers?

Liz Stokes: Yeah, certainly; it’s gonna be like a 50-50 mix of Future Me and Jump. Also, it does feel like a bit Jump Rope Gazers tour I guess because we never got to play those songs live. And then we’ll come back and keep touring once the new album comes out!

Pan M 360: Given its melodic and energetic rock approach, your music is generally uplifting, even when the lyrics tackle anxiety-inducing questions like the rising sea level on “A Real Thing,” for instance. It seems to me like a conscious choice for the band, to gently move or raise awareness without causing dread?

Liz Stokes: We experience a lot of dread and that’s why I don’t necessarily like to write and sing about these things. I like to write about what I’m feeling, but I don’t like to play songs that make you feel dread and make you feel really anxious. That’s not what I like to do. I like the songs to feel hopeful and exciting. And I feel like you can still write whatever you want, you know, in a way that’s very “word painting”, about those feelings that you’re trying to get across.

Pan M 360: Since we’re talking about anxiety-inducing topics, watching your “Knees Deep” video made me realize I haven’t gotten over my fear of heights. Is the sequence of events we’re witnessing real? The band members leaving one at a time to bungee jump over the river and coming back to the rehearsal space?

Liz Stokes: Well, it’s a fictional video! But the bungee jumps are real; we went in the morning, and everybody could jump one at a time. And then we went to the studio and shot the scenes there. We’re definitely not actors! It was a very silly video, but we had a lot of fun making it.

Pan M 360: But it works somehow! Even though you’re using props like algae stuck in one of the musician’s hair. Where is that bridge exactly? Is it in Auckland?

Liz Stokes: Yes, that’s the Auckland Harbour bridge, up because I think a lot of bungee jumps. It’s very picturesque, yet we didn’t want it to feel like a tourism study. For us, it’s just a functional bridge over the harbour. On a beautiful day, the view is great. But at the end of the day, you’re just jumping from a commuter bridge!

Liz Stokes: Ben (Writer’s note: bass-player Benjamin Sinclair) and I had done it before as kids, on a family holiday. But this time it was scarier, I think. When you’re a kid, you’re like ”Well, even if I fall, I’ll bounce”, but as an adult, you’re like “I will shatter into a million pieces”!

Pan M 360: I read in the press release that your new album would be an “incandescent collision of power-pop and skuzz”. For those, like me, who are not familiar with “skuzz,” how would you define it?

Liz Stokes: I’m not that familiar with it either, to be honest! We have somebody that writes a bio, and he or she is much better with words than we are. We like distortion, you know, fuzzing out! I like writing pop songs, within the pop format. But we still like distortion and power-pop.

Liz Stokes: I love Alvvays, a Canadian band. I’m also a big fan of the Buzzcocks, I listened a lot to their compilation Singles Going Steady. I like just how simple it is, the ideas, the melodies. They really pop out, they’re really memorable. I’m not like a “deep cut” listener. I listen to that in my car a lot, the Buzzcocks, going into the city.

Pan M 360: Well I am really looking forward to your Sunday concert in Montréal. Thanks so much for this interview, be safe!

THE BETHS PLAY LE BAR RITZ PDB ON SUNDAY AUGUST 28TH AT 8 P.M. YOU CAN BUY YOUR TICKETS HERE!