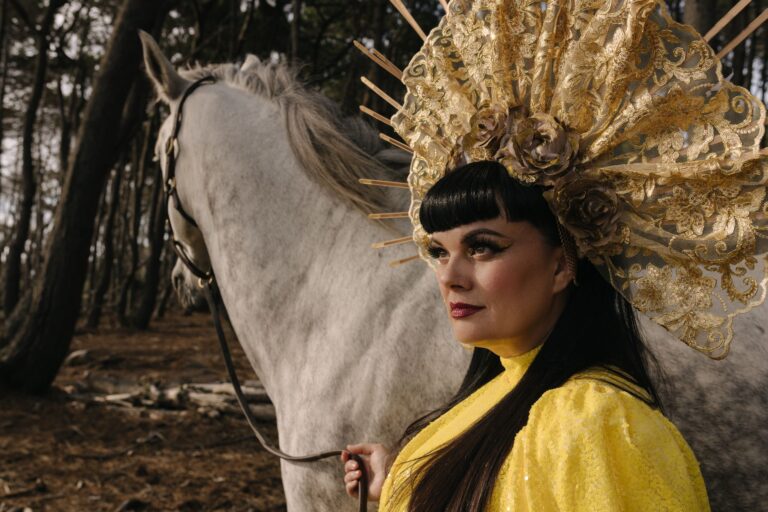 Tami Neilson is the ‘Kingmaker’ calling out inequality

Before her set at the Montreal Jazz Festival, singer-songwriter, Tami Neilson, spoke with us about working with Willie Nelson, her firery upcoming opus, Kingmaker, and inequality in the country music industry.

PAN M 360: Where did some of the themes for Kingmaker come from? Is it getting better for women in the music industry or just the world in general? I suppose it’s hard to make the case for the US since the supreme court’s decision on Roe V. Wade…

Tami Neilson: I guess I tend to write about what I know and my personal experience, which is that of an Indigenous woman in the music industry. I use my music to keep the conversation of equality for women and people of colour at the forefront. Kingmaker particularly addresses the huge disparity in female and BIPOC representation in country music specifically but it all relates on a broader scale to how we are treated in society as a whole. Those threads have always been in my music but I feel as things grow more dire and equality seems to be taking steps backward instead of forwards, it’s more important than ever to sing the songs of empowerment and encouragement. Taking up space in this world as a woman is a form of protest.

PAN M 360: I get a huge Nancy Sinatra inspiration from the songs “Kingmaker” and Baby, You’re a Gun.” I think it’s because of the string arrangements.

Tami Neilson: The Nancy and Lee albums were a big inspiration sonically for this album, as were Ennio Morricone and Bobby Gentry. I wanted this album to follow the cinematic arc of a story, like a movie soundtrack, rather than just adhering to one style of music.

PAN M 360: You’re originally from Toronto, but live in New Zealand. How is the support for your style of music there?

Tami Neilson: I love the music community here and the arts are well supported by our govt, as they are in Canada- but there is no radio play or mainstream platform for my genre of music (country/Americana) like there is for Pop here. It’s a good thing I can reach my audience directly these days and they sell out my shows and push my albums to the top of the charts…but it would be really nice to enjoy the support that the pop acts get.

PAN M 360: “The King Of Country Music,” seems like a bunch of memories from your start as a musician, singing with Kitty Wells, perhaps opening for Johnny Cash? Is that song about the women behind country music or the women who helped usher in the kings of country music?

Tami Neilson: That song is like a capsule autobiography of my journey in country music since I was a child. It addresses there being a lack of women played on country radio (only 13% of country radio is made up of women) and asks a question that hopefully keeps the conversation of inequality in country music going and makes people reflect on that question.

PAN M 360: “Beyond the Stars” features a duet with Willie Nelson. How did you manage to get his presence and what was it like playing with him live? It must have been life-changing?

Tami Neilson: I still wake up every morning and check my phone to see if our song actually still exists because it feels like it was all a dream. We ended up meeting through his wife Annie when I was supposed to play Luck reunion back in March 2020 and the whole world ground to a halt. They moved the Festival online and I did three songs, beaming in from New Zealand and Willie and Annie were watching. Annie started to follow me on Twitter and interact with me quite a bit but it took a few months before I realized who she was! Our friendship grew over the pandemic and it took me about a year to get up the courage to ask if he might consider doing a duet with me, a song that I’d written about the loss of my Dad. He said he loved the song and said yes. The day he sent his vocals through I couldn’t stop weeping. The thought of what my Dad, a musician who built the foundation of music on which I stand in our touring family band growing up, would have felt and what his reaction would’ve been to Willie being his voice on this song was so overwhelming.

And then, finally, two years later, in March of this year, I got to fly to Texas the week our borders opened in NZ, to perform the song in person with him at Luck Reunion. I made it through the first verse and the chorus, but when he started singing his second verse I was a goner. It was so overwhelming and truly felt like a sacred moment.

PAN M 360: Did you have to change the song at all, key-wise or anything once he said yes and would duet on it?

Tami Neilson: I went into the studio not knowing for certain if he would do it, so took a leap of faith and listened to his latest songs and chose the most common key he sings in. It was a bit nerve-wracking with an 11 piece string section locking it in

PAN M 360: There’s a bit of pageantry in your aesthetic with this album (the glowing dresses and wild headpieces). Has that always kind of been your M.O., bringing more of a spectacle to the classic Americana Country sound and style?

Tami Neilson: My visual creative expression has always been just as important to me as the audio, it goes hand in hand with my music. Like Dolly, Bowie, Prince, Grace Jones…I’ve always been drawn to artists that create for both the eyes and ears. Whether it’s sporting a beehive wig custom made for me by a drag queen on my last album CHICKABOOM or a collection of crowns or headpieces for my new album Kingmaker, my visuals are always part of the story I’m telling. But, more than anything else, it’s fun.

PAN M 360: Would agree that it’s important to use one’s platform as an artist to be political or sing about some of the things they don’t view as right? Kind of like ‘sassing the patriarchy?’

Tami Neilson: To quote Nina Simone, “It is an artist’s duty to reflect the times.”

PAN M 360: How do you approach the live show, bringing these songs organically to life on the big stage?

Tami Neilson: I’m usually a real stickler for being able to recreate what is on my albums so my audience isn’t disappointed, which means I tend to keep things lo-fi and sparse, but when I created Kingmaker in the midst of lockdown, with no touring happening in the foreseeable future, it really freed me to make the album I’ve always wanted to make, without restrictions. Now, of course, I can’t tour with a string section every tour I do, so…we’ll be getting creative.