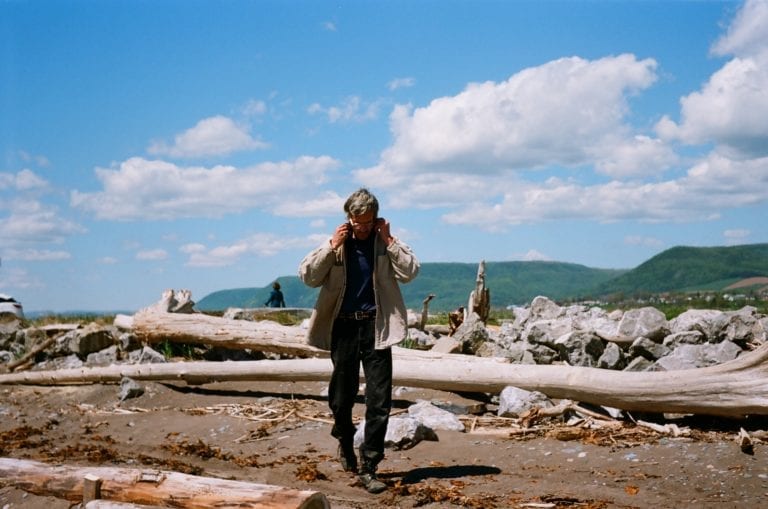 Jimmy Hunt: Listen to the silence

Hermiting in the hinterland of Baie des Chaleurs, where he now resides, Jimmy Hunt did not plan to create the material for an album. Motivated rather by a literary project, he finally distilled its most significant elements into minimalist songs, freshly recorded and out now on the Dare to Care label. Hunt talk with PAN M 360 about his new opus, Le silence.

“Since 2015,” he begins, “I’ve been spending a lot of time in the Gaspésie, but I have been there full-time for the past two years. I lived there in a yurt until 2018 and then I bought a house in the area of Maria, at the foot of the mountains. I had a girlfriend at first, then we split up, I ‘hermit’. I won’t always live alone, but I needed that quiet.”

Chocolat, the band that once introduced the singer to the world, and which has returned to the forefront in recent years to the delight of its fans, is on an indefinite break.

“It’s a group effort! Decision making and all that,” sighs the singer. “When my father passed away, we were in the studio doing Jazz engagé, I was between Gaspésie and Montreal at the time. At the end of the sessions, I felt that I might not be able to continue. But we went on tour in France anyway and… at the end of it all, I didn’t feel like doing any more shows, I didn’t feel like doing anything at all. I’d had some creative years with the return of Chocolat and three more albums. I’d squeezed that lemon dry.”

The death of his father was a turning point.

“It’s always a time for great reflections on life, for introspection. My father and I didn’t see each other physically very often, but we were very connected. Sometimes I didn’t see him for several months, I rarely saw him towards the end, once a year. Since he died, I realize we had a lot in common. He had really influenced me, much more than I thought.”

After death, life: Jimmy Hunt conceived Le silence in his Gaspesian solitude. The project of long-form writing finally turned into that of writing concisely.

“I thought I’d decorate my preferred texts, but in the end, I liked them that way. Things can happen when you read such lyrics, the imagination can work more. In the beginning, the music was ambient around the lyrics, rather shapeless. It was interesting but too flimsy. I chose chords and melodic lines while keeping the lyrics super simple.”

Apart from Hunt’s voluntary simplicity, the minimalism he chose was appropriate at the time.

“We’re bombarded with information, an overflow of pitches. It feels good to have a little space created by a minimalist statement. I talked to the people from Dare to Care about the short duration of the record. Add a bit of filler to get to 40 minutes and a bit? Uh… no. It’s the result that counts, which is a good thing in itself. It’s a good time for creation in that sense, there’s room for all formats.”

Hunt walks us through his new record, song by song:

“I’m still planning to write and I’m going to end up doing a songbook. Obviously, I have several fragments of a longer format on my computer. Like this: one evening, I was coming back from a neighbour’s house and I thought that my literary work wasn’t making sense. The sky was starry at the time, I had a panorama of beauty in front of me while I was living this doubt, this creative malaise. I finally came up with this text about doubt in creation. Aesthetically, it creates a beautiful image, I think.”

“Being publicly recognized can turn into a form of narcissism, that’s what I’m talking about in this song. Towards the end, the lyrics become darker, the narrator becomes the the holy light of the people who love him. In real life, I’m not a superstar, these lyrics are ironically pompous, exaggerated. With the music, however, the text becomes more touching, more sensitive.”

“Doing my life over, wanting to start over, that’s a typical midlife crisis reflection. The text is somewhat ironic when the narrator wants to become a virgin again and fall in love with a writer. Since he can’t be one, he might admire one. I didn’t add anything to the original text of this song because I would probably have weakened it.”

“I was taught about the microbial phenomenon in science shows. These organisms are found in our intestines and have existed for millions of years. Microbiota cause us to exchange microbes with other humans, they influence our behaviour. They encourage us to socialize and share, which is something we avoid at present. Microbiota don’t like the pandemic! In short, our intestines steer us; we are less in control of the boat than we might think! So, I brought the subject back to the context of isolation and solitude, and to the questioning of my own identity and control over my life. »

“This waterfall exists, it’s on my land. In winter, it is covered with turquoise ice, the water flowing underneath produces beautiful sounds. I think it’s wonderful that it’s been happening like this for a very long time, usually without a spectator.”

“My father died alone in his cabin. A neighbour found him, my brothers and I arrived when he was at the morgue. I was shocked that strangers brought his lifeless body back in an ambulance and put it in a drawer (which is quite normal).”

“It’s a love separation song. Someone was writing my bio for the album and thought I was still talking about my father… you can see it that way, I’d rather leave it open. It’s also about mental illness; everyone has their own problems, there are moments of peace when you reach equilibrium and then you get caught up. We’re only safe from our ills for a short time.”

“There are these social movements that question consumption and capitalism, which I’m putting here in perspective with my own distancing. The ultimate goal is to take a step back to find a more viable path, to be distant from others to finally get closer to them.”

“Winter was beginning when I wrote this. I couldn’t wait for the snow to set in, to think about something else while the scenery changes and the whiteness appears.”

The lyrics on this album, as you can imagine, are not carried by heavily weighted music, although…

“I wanted to go for experimental sounds at first, but it was a bit too much. We recorded some pedal steel, it steered the matter towards a kind of Americana folk, while highlighting more instrumental moments, close to psychedelia, prog or space-rock à la Pink Floyd. But no musical genre manifests itself very clearly.”

“It’s not a fireworks display. It’s composed and calm, it’s a good representation of my state of mind, where I was during its conception.”