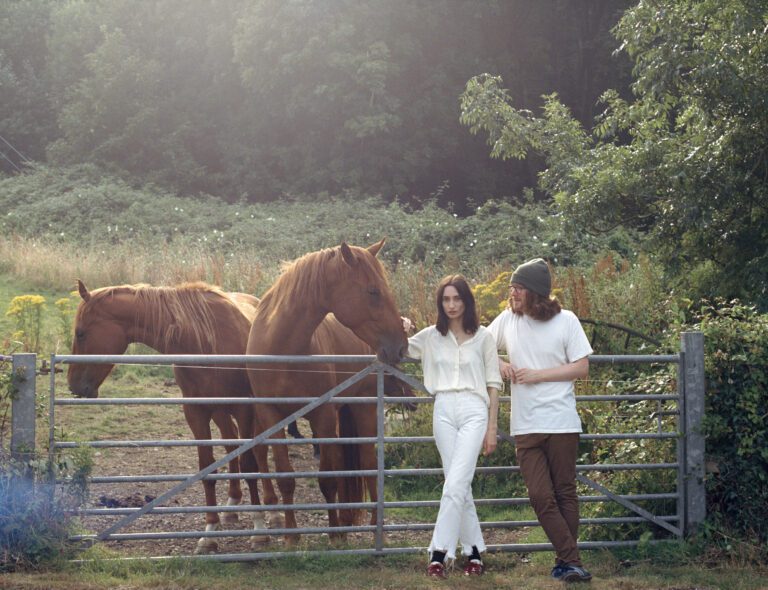 Osheaga 2022: King Hannah on striving for natural sentimentality and emotion in their music

King Hannah is a relatively new duo project from Liverpool, UK that formed a bit before the pandemic reared its ugly head. A bit ’90s shoegaze ala Mazzy Star and Lush, mixed with some Bruce Springsteen and The War on Drugs, King Hannah have a spectral way of pulling you into the heart of their songs.

Led by Hannah Merrick’s alluring and vulnerable lyrics about everyday situations and stories and Craig Whittle’s layered guitar soundscapes, King Hannah’s latest album I’m Not Sorry, I Was Just Being Me could be considered a sleeper hit of 2022. With humble beginnings, the duo is gaining more and more recognition across the pond, since being discovered and endorsed by the likes of Sharon Van Etten way back in 2019.

Before their performance at Osheaga, we spoke with Merrick and Whittle about their beginnings and putting honest sentimentality into everything they do.

PAN M 360: How did King Hannah form and where did the name come from?

Craig Whittle: We met when I started working in a bar that Hannah was already working in, and I recognized her from seeing her perform at a university band night a few years earlier when she blew me away with her voice. From there we just became really good friends and started making music together.

Hannah Merrick: I had the name in my head long before I met Craig. And he loved it and thought it fitted so well, so we kept it. I love the idea of being this strong female presence but with a male status, I just think it’s quite memorable, possibly controversial and a good conversation starter, like now.

PAN M 360: The lyrics in many of the songs on I’m Not Sorry, I Was Just Being Me are so vivid and personal. Like “Go-Kart Kid (Hell No)” and “A Well-Made Woman,” I feel like I’m watching fragmented clips of a person’s life. Actually, Go-Kart Kid (Hell No) really reminded me of the South London band, Dry Cleaning. Have you got that comparison before?

Hannah Merrick: Oooh no we haven’t, that’s a first for us!

PAN M 360: Hannah are you ever afraid of being too personal in your songwriting?

Hannah Merrick: No, not at all. I’ve been doing it too long to care what others think, plus writing real stories is where the love and drive comes from. I wouldn’t do it otherwise.

PAN M 360: It’s really a fantastic album, a perfect blend of 90s shoegaze and moody Americana. Did you guys talk about what mix of genre or feelings you wanted?

Hannah Merrick: Thank you so much. No, not really. We made the album song-by-song, so while we were recording and mixing one song, I’d be writing the next at home in my bedroom. So we never discussed feelings or genre or what the songs should be about. Thankfully, we knew exactly how we wanted the album to sound, simply from listening to our favourite bands, so we drew ideas from them. Life’s a million times easier making an album when you want the same outcome.

Craig Whittle: I think we are naturally very sentimental and emotional people so I think that warmth really came through in the album, which I love. As Hannah said, we both know we are striving for the same sound and emotion in music, so that makes it a lot simpler when making big decisions.

PAN M 360: I’m a huge listener of instrumental shoegaze or post-rock, so the fuzz guitar freakouts really do it for me. Do you believe they have just as much power to convey a feeling as say, lyrics?

Craig Whittle: Yeah definitely. I hate the idea of doing a ‘guitar solo’ because that seems so self-indulgent and I’m not like kind of person at all. But I love long instrumentals and try to think of the guitar parts as little moments that help to bring out certain emotions and tensions in the music, almost providing a location or a setting for Hannah’s lyrics to exist in.

PAN M 360: “The Moods That I Get In,” has so many layers to it, do you ever experiment with them live for some improv or with any song?

Hannah Merrick & Craig Whittle: We don’t improvise as such, we generally stick to the same thing, but we definitely lengthen ends when we want to. We’ve completely mixed up the “Big Big Baby” arrangement, it’s completely different live to what it is on the album.

Hannah Merrick: I love playing around with a vocal melody too, mainly in “Moods” and “Go-Kart Kid” as there’s so much space to do so in those songs.

Craig Whittle: Sometimes we will drag songs on longer if we’re really feeling them, and I definitely try to mix the lead guitar parts up live to keep a feeling of wildness or spontaneity in the set, because that’s what I like to see when I watch live music

PAN M 360: There is no direct theme on the album, but there are quite a few references to nostalgia for an older time. Do you guys still get nostalgic for older times?

Hannah Merrick & Craig Whittle: Of course, definitely. We can’t wait to see you all and play at Osheaga.