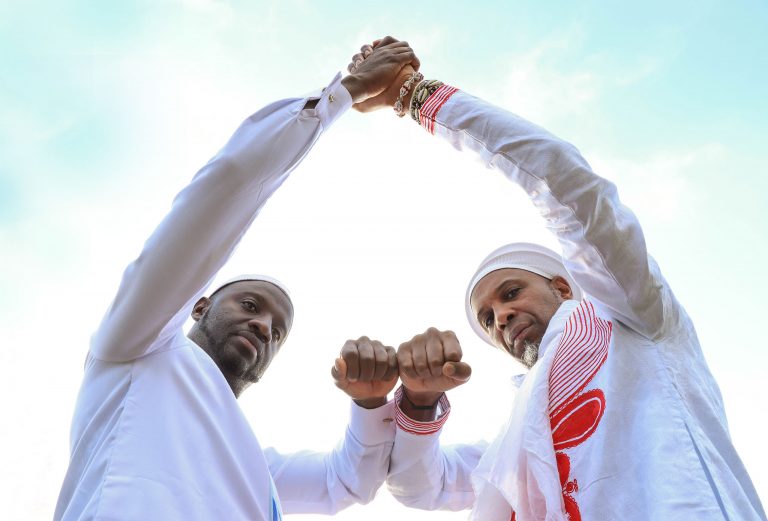 “Transparent Water”, Seckou Keita and Omar Sosa’s debut album, was released in 2017. Four years later, here is “Suba”, released on October 22 by Bendigedig, the second chapter of this collaboration between a Senegalese griot and a Lucumi artist, an Afro-descendant of Yoruba culture, a culture from present-day Nigeria forcibly transplanted to Cuba by conquering slavers from Spain.

Written and recorded in 2020 during the planetary confinement, the opus Suba wants to be a placid work, first and foremost. A work dedicated to hope, to compassion for others, to benevolence, to peace in this world that sorely needs it. Omar Sosa and Seckou Keita form a trio with Venezuelan percussionist Gustavo Ovalles, a trio that is joined by Brazilian cellist and arranger Jaques Morelenbaum, Burkinabe flutist Dramane Dembélé, and English percussionist and director Steve Argüelles.

Among the best Cuban pianists of this era, Omar Sosa has remained an off-the-beaten-path artist since the beginning of his long musical migration, well, if we stick to the stereotype of the Latino speedy gunner one might expect. Omar Sosa’s cross-cultural crossovers span some 30 albums and even more world tours.

Before that happens again, here is a second studio collaboration with Senegalese singer and kora virtuoso Seckou Keita.

More precisely, the latter is from Casamance. On his father’s side, he is from the royal line of Keita. On his mother’s side, the Cissokho family, he comes from the hereditary caste of griots – musicians, singers, storytellers and messengers of West African traditions. Seckou Keita is both the guardian of the great Mandingo musical traditions and very open to the rest of the musical world today, as evidenced by his harmonic proposals that clearly go beyond the West African heritage.

His qualities as a musician have notably earned him an invitation to the School of Oriental and African Studies in England, where he has lived since 1998. He has given several studio performances, the best known of which in the West is the album Clychau Dibon, performed in concert with Welsh harpist Catrin Finch.

So? Let’s reach  Omar Sosa in Barcelona, where he lives for 2 decades… but also spend plenty of time in California  and again in Cuba – whose economic precariousness he laments.

Omar Sosa: In 2012, I released the album “ Eggun: The AfriLectric Experience”. My drummer at the time, Marque Gilmore, had invited me to play with his band in London. I joined that band at the last minute and tried to see who I could click with. I always do this when I come into a new context, it’s always helpful and productive to have a musician that you spontaneously connect with and who can also support you during the performance if need be. When Seckou started playing, it was clear to me. I told him, hey I feel like we are playing together as if we have known each other for a long time! I then asked him if he was open to a possible collaboration. Let’s do a project together! I found a studio and invited him to create new music.

PAN M 360: Where are the values of newness and freshness in this music that unites you?

Omar Sosa: I don’t think anything is really new in music in general. What is new is the way to mix the spices of the dish! This time, the mix would be with a griot from Senegal, a lucumí musician from Cuba, a percussionist from Venezuela. Before the pandemic, we were able to tour and when the lockdown was imposed, I called Seckou back and suggested that he lead a second project, this time more orchestrated. The idea was also to add other colors, not only African and West Indian but also Asian and Western. So we spent 10 days in the studio in Mallorca, then I continued to develop the concept elsewhere with other collaborations. So this is the idea of this trio, but this time with more arrangements. This trio was already working very well; we are on the same wavelength, there is no conflict between us because we seek to create singing and peaceful pieces, rooted in our respective traditions.

PAN M 360: Afro-Cuban / Mandingo, traditional Afro / contemporary jazz, acoustic / electronic…Cross-references are a specialty of yours! What are they this time?

Omar Sosa : It’s Africa for us, our distinct traditions, presented with respect for each other.   None of us are trying to impose ourselves, none of us want to fight to show who is the best, who is the leader… who puts the biggest dick on the table. We’re not looking to make testosterone music, we’ve all done that before and it’s not what we’re looking for anymore. We all understand that the music is the boss, that we have to serve the music. We are antennas and I work with musicians who see themselves as antennas. The best way to play the best music and record the best works is also to share, to pool our respective knowledge. This is how we find the balance between the cultures involved in such a project. We are the servants of music.

PAN M 360: This album is certainly more arranged, but remains calm and minimalist. Was that the idea?

Omar Sosa: Yes, this music is contemplative and inspires peace. The more you listen to it, the more you discover the minute details. To play this music, we had to put our egos aside and be relaxed. And you know what? It is very difficult to make contemplative music, it requires more attention, more care, a concern for silence. You have to get rid of the pollution of the mind, that’s why I like pacifying music, it allows the listener to listen carefully, to digest what he hears.

PAN M 360: Suba also defends values that are greater than the work itself. What are these values?

Omar Sosa: To inspire peace, love and hope.  In the Mandingo language, Suba means dawn, sunrise. The idea of a sunrise came up and since Suba also resembles Cuba… So Suba is the moment to reprogram oneself before facing life again. Our songs are about friendship, spirituality, migration, the ocean, anxiety, drama, hope in spite of everything.  There is too much aggression in our lives in this human jungle, the present time is worrying, that’s why we have to activate the connections with our inner self, our spirit, our luminous ancestors, our own spirituality. Music can help to do this. This is why we prefer more contemplative music: more than ever, the world needs peace and contemplation.

PAN M 360: You shot all the recording sessions. Why did you do that?

Omar Sosa : Nowadays, music is not enough (laughs)… So we made an audiovisual document with the process of recording, it became a must. Maybe I’m old-fashioned, but I still wanted to see the musicians really play, I didn’t want them to be extras in the service of the image. So we hired a videographer who was with us from the beginning to the end of the sessions, with several cameras in the studio.  We had no choice: we had to succeed in the group shots so that the video would be conclusive. This implies defects in the execution?  In my opinion, there are no faults in art… it’s all a matter of perception.