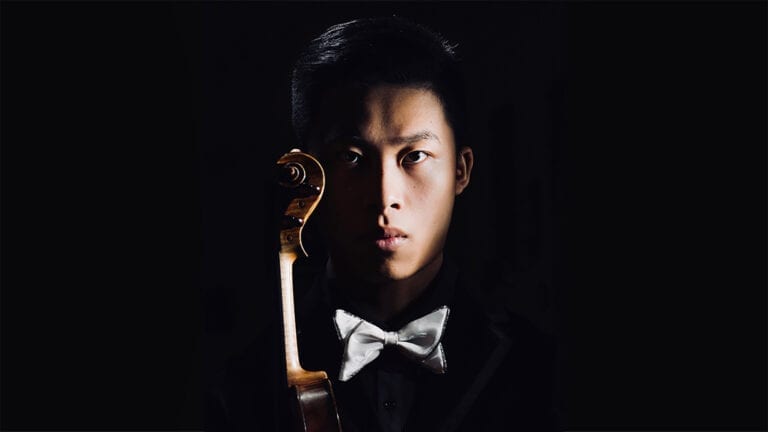 Invited to the Bach Festival, Montrealer Kerson Leong is now one of the country’s elite classical violinists. His gifts have led him to an international career that has only just begun.

For the 2018-2019 season, Kerson Leong has been named Artist in Residence with the Orchestre Métropolitain de Montréal under the direction of Yannick Nézet-Séguin. Kerson is also an avid chamber musician and has been invited to perform at numerous international festivals. Not to mention the Sylva Gelber Music Foundation Award (2015-2017), the Prix Jeune Soliste 2015 of the Radios francophones publiques, a mentorship award from the Lin Yao Ji Music Foundation of China for inspiring the younger generation, not to mention the Révélation Radio-Canada 2014-2015 for classical music. In addition, he is an associate artist of the Queen Elizabeth Music Chapel in Belgium.

And here’s the violinist in the (virtual) spotlight of the Bach Festival, undoubtedly one of Montreal’s best-run classical events. And since users of PAN M 360 must absolutely discover Kerson Leong if they haven’t already, a conversation is in order.

PAN M 360: How have you maintained this passion for playing, from childhood to reaching an international level of recognition?

Kerson Leong: My mom is a pianist and music teacher, and my dad is a scientist who fell in love with classical music and even taught himself a bit of classical guitar. Having grown up in a musical family, it was inevitable that music would play a significant role in my life, no matter what. Although I started on the piano, I soon picked up the violin at the age of four and a half, and seemed to show a natural affinity for the instrument almost immediately. Things picked up quite rapidly after that, having won regional festivals and, subsequently, the Grand Prize at the Canadian Music Competition for five consecutive years.

PAN M 360: You’re said to have a “rare and innovative” mastery of the instrument. Your talent is indeed rare, bravo! Could you tell me more about the innovative side of your playing?

KL: I guess it would be the tailoring of my technique, over the past few years, to an all-encompassing musical approach and sound that listeners could identify as my own, and gaining quite a lot of firsthand insight into the intricacies of violin technique along the way. The sharing of this insight has become important to me, hence for example, my Art of Etude tutorial series on my YouTube channel, and the fact that reputable schools like the Jacobs School at Indiana University and the Sibelius Academy in Helsinki, among others, have invited me to teach.

PAN M 360: Your father has a very advanced grasp of physics, notions that you would have applied to the resonance of the strings of your instrument. How would this acquired knowledge have improved your playing?

KL: Indeed. I’ve served as a demonstrator at lectures my dad has given about this subject in the past, in places such as the Central Conservatory of Music in Beijing, the Barratt-Due Music Institute in Oslo, and various universities in California. I’m certainly no physics expert myself, but it was the way in which I ended up interpreting those concepts or ideas in a practical sense specific to my setup and needs that have greatly influenced my playing since.

PAN M 360: How do you think your own playing is distinct? Phrasing, timbre, attack, lyricism, etc., how would you describe your personality as a soloist?

KL: I’d let the listener discern what qualities they perceive in my sound and playing, and in what repertoire, but I would characterize my general approach as uncompromising, unrelenting, and intense.

PAN M 360: What was your family’s story in Canada?

KL: I was born and raised in Ottawa, so that city will always feel like home to me. On the other hand, I could say that my musical heart in Canada could be found in Quebec, and in Montreal in particular, due to the abundance of important musical milestones and memories I’ve made there. Also, Mr. Roger Dubois of Canimex and his family are some of the people most dear to me. In this sense, I’ve found myself fully having embraced Quebec and its wonderful people.

PAN M 360: Is your activity as a chamber musician most important in your current career? Do you play more often with symphony orchestras?

KL: Even though soloing with orchestras makes up the most of what I do, chamber music is an essential part of my life. For me, chamber music is where one learns to listen, to communicate, and work together in a musical context, something that means informal gatherings and good times with friends just as much as a powerful experience for everyone in a concert hall.

PAN M 360: When it comes to classical and contemporary music, do you have favourite composers?

KL: I’d say my favourite composer is always the one I’m currently playing. It’s important as an interpreter to fully embrace whichever piece you end up performing, and different pieces by different composers bring out different sides of me as well. I’ve always had a soft spot for the music of Brahms, however.

PAN M 360: Do you have any favourite periods in musical history? At first glance, it seems like you don’t, since you interpret baroque, classical, romantic, modern, and contemporary works…

KL: Similar to the previous question, I embrace each period equally, as they each bring out something different in me.

PAN M 360: Do you have favourite soloists on the violin? Role models?

KL: I grew up listening mainly to violinists of the 20th century, so for example Heifetz, Oistrakh, Szeryng, Milstein… Even though my tastes have greatly diversified since, I still have a soft spot for the artists of that era. There are also so many great musicians today I admire for different things, whether violinists, pianists, cellists, singers, etc.

PAN M 360: You play on a superb Guarneri del Gesu from 1741. What are the most beautiful properties of your instrument?

KL: Mainly it’s the timbre of the instrument. There’s a real “tenore” quality and warmth to the sound – something that I connected with immediately, as it comes quite close to the way I would imagine my inner voice. I also like the fact that there’s texture and grit to the sound as well, giving it a more human and organic quality as well. My sincere and continuing thanks to the generosity of M. Roger Dubois of Canimex for the chance to get to play and live with such a wonderful instrument.

PAN M 360: You’re interested in Gershwin, as is the case on your album recorded with pianist Philippe Chiu and released by Analekta in 2016. We know that George Gershwin was the ideal bridge between Afro-American music and French impressionism, so… would you be inclined to invest in modern or contemporary jazz? Are you interested in improvisation?

KL: Yes, of course. I used to play jazz clarinet and saxophone in my teen years, and I’d say that I’m very open to embracing new forms of expression in the form of improvisation and other musical genres. I’m happy to let this side of me develop and to continue learning considering all the free time this pandemic has allowed for.

PAN M 360: Could you comment briefly on the programme of your concert at the Bach Festival? How do you plan to interpret these works?

KL: The Bach sonatas and partitas are quite the violinist’s bible, so to say, and the Ysaÿe solo sonatas follow very much in the footsteps of that set, but embrace the style and expression of his own time in the beginning of the 20th century. The Ysaÿe set in particular has become a real passion project of mine recently, having really connected with the powerful language of that music. Bach is something I play daily, and it never fails to reveal me to myself, so to say. Therefore, this concert will almost be like welcoming a livestream audience into my own living room, and will surely be an interesting experience as a result.

PAN M 360: What are your next goals, professionally?

KL: One thing that I think is especially important now is outreach, to inspire new generations of music enthusiasts and to create a thriving environment where people could really recognize music and art as a vital part of life.

KL: The pandemic has put a hold on a lot of things, but I’ll be continuing to do livestreams and virtual concerts for the time being, as well as connecting directly with people on social media. I also have a new album coming out at the beginning of this coming year, so that’s exciting – details coming soon.