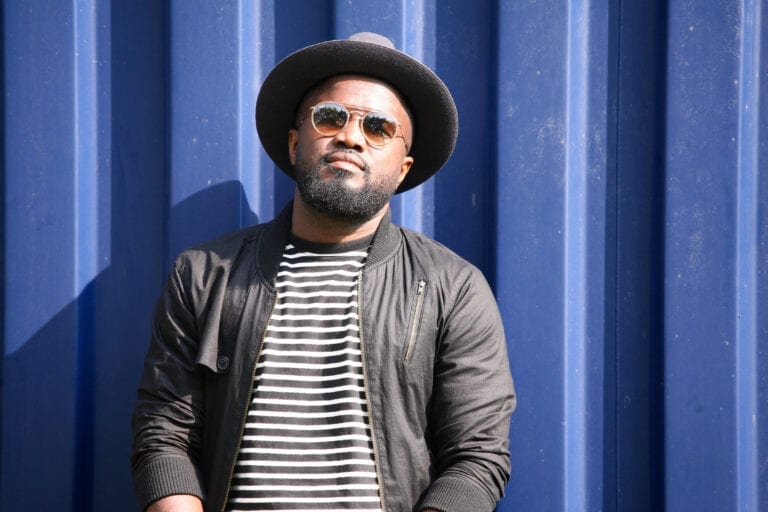 Sé Montreal, sé Haiti, sé Creole, sé kompa, sé electro cumbia, sé tradition mixed with very contemporary music. Released on March 25, Fwonte’s recent eight-track album, Danser avec mes démons, can finally be heard in a concert hall. The artist was just waiting for an opportunity to infect people with his smartly crossbred music – Pop Montréal will be the launch pad for this record released at the beginning of the pandemic. Kerns Olibrice, alias Fwonte, is one of the festival’s guest artists, and he’s very happy to be part of it.

“When I saw what was happening around the planet,” he says, “I decided not to have too many expectations for the new album. Things were going to happen eventually… I just had to be patient. I released my album, just as it was supposed to be. I was pretty sure it would find its way, pandemic or not. Anyway, I didn’t expect my album to produce a global explosion. In spite of the crisis, people interested in my work found and heard the new songs… In fact, they listened more to these songs than to those of my previous projects. The majority of people said that this is my best album (laughs). That’s good (laughs). I want to take another look at tradition, I want to take my Haitian culture further, somewhere else, I want to shed new light on the music of my native country.”

Due to the crisis caused by the coronavirus, the album was never presented as a stage show.

“This will be the first time I share my new songs in front of a live audience. I’ve never played at the Rialto, but I know the place well. I’ve already been there to attend different concerts. For my show, the audience will be limited to about 30 people. I think they will be standing, as long as they respect the sanitary measures. What I do is danceable. I just hope people can move around a little bit! I think there’ll be enough space for them to have fun, despite the restrictions.  Normally, at my shows, people are moving from start to finish…”

In order to share the songs from the album Danser avec mes démons, Fwonte will be accompanied by two people on stage: “A DJ will take care of the sequences, while another will be in charge of percussion and drums. I’ll take care of the vocals and the atmosphere. I might have some fun on the drums here and there. In fact, I’ll adapt to this particular crowd. One thing is certain, this 30-minute concert will allow me, in amore limited context, to evaluate how people react to my new songs, in concert…”

Eventually, Fwonte would like to present a large-scale show that would be ideal for certain festivals.

“To celebrate the tenth anniversary of my arrival in Montreal, I’ve been working on a mega-show concept including Afrobeat dancers and several musicians (including the addition of an electric guitarist and a keyboardist). I also asked for help from some producers. Because of COVID-19, however, I put this project on hold. It will come…”

Fwonte’s most recent musical work, at once dark and joyful, is made with respect for Haitian traditions, certainly, but it’s infused with a good dose of avant-gardism that will allow most spectators to find something they like during the performance scheduled for the Pop Montreal festival. At least we hope so. Better yet, we believe it.