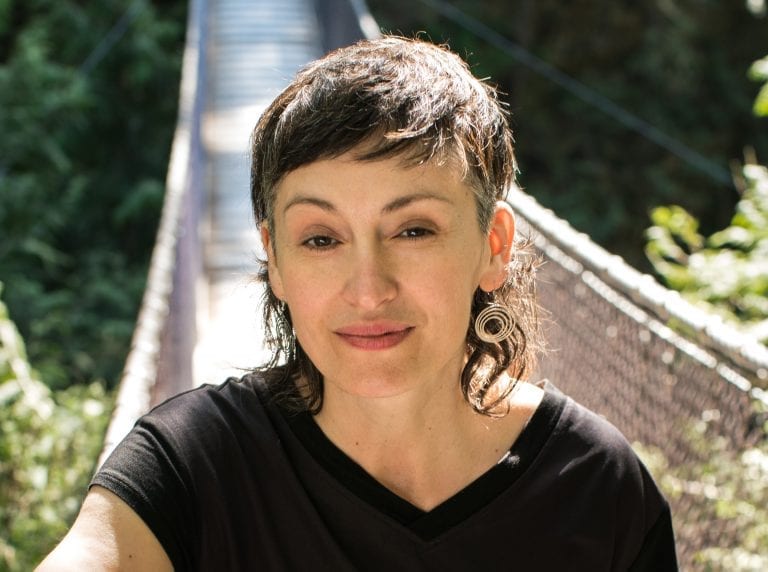 Dóttir at the Off Jazz Festival: handpicked Nordic whispers

Sienna Dahlen and Véro Marengère hold a nourishing conversation about the Nordic lands of contemporary jazz, free improvisation and electroacoustics.

Dóttir is a female duo, a magnificent encounter between the emerging electroacoustician Véro Marengère and the renowned singer, composer, improviser, writer, and jazzwoman Sienna Dahlen. Two sound universes, two generations, two approaches, a common Nordic ground. This is certainly one of the highlights of the now-virtual programming of the Off festival de Jazz, presented in Montreal this weekend.

PAN M 360: Can you describe your interests in electronic music? Bands, artists, styles?

SD: Honestly, I haven’t listened to a lot of “electronic music” in my life! Over the past six years or so I have checked out people like Nicolas Jaar, Nils Frahm, James Blake, etc., and I love the ambiances that they create. Radiohead has always been a source of inspiration for me too. I tend to need more than just a “deep beat” to keep me interested in a piece of music, so melody, production, space, movement, direction, vibe, harmony to a certain degree, and colour are all of interest to me in this style. In general, I love experiencing darkness as a beautiful place to be, and artists that create this sensorial effect in their music have always attracted me. To a certain degree, this has also been a theme in my own work, whether it’s in the songs I’ve written and recorded over the years, or in this new project.

SD: I enjoy and have enjoyed listening to many of the bands/artists you’ve listed here… Miles, Nils Petter Molvaer, Weather Report, and Cinematic Orchestra, among others. I would add Sidsel Endresen and Bugge Wesseltoft to the list as well. I don’t really have a vision of what jazz meeting electronica should sound like. I am simply a result of all of the different experiences I’ve had. My work with people like Christine Duncan and other Toronto-based composers/musicians is where I was first exposed to spontaneous musical creation, extended vocal/playing techniques etc., and it was there that I was given a chance to explore my voice in a plethora of various ways. My work with DJ MHBee (Marie-Hélène Brousseau) in our duo Klardrøm saw me mixing those improvising and vocal techniques with pedals, beats, synths etc., bringing the electronic side of things into the mix. My background in jazz has taught me how to hear deeply. Creating contrasts, exploring timbre, improvising, knowing how to support and lead, etc. are all factors that guide my musical vision. In Dóttir, I have a desire to keep things raw and uncensored. This is not to say that I’m not always trying to put 150% of myself into this music but I’m excited by the possibilities of imperfection. I’m not concerned with my voice or the music sounding pretty. Sometimes it does, and that’s great too, but I’m trying not to make it a priority. I’m striving to tap into my authentic, primal response to the moment and to somehow sculpt something out of it that makes sense to me rather than imposing some sort of pre-constructed, intellectual direction on the outcome.

PAN M 360: Is Dóttir – which means daughter in Icelandic, right? – a confluence between electroacoustic, experimental, ambient, and improvised music?

SD: It does mean daughter, and yes, I would say you’re onto something there…

PAN M 360: Tell us about your musical partner, Véro Marengère. Where is she from? Where is she based? What are her own tastes in music? What styles?

SD: Véro is originally from Gatineau and she’s currently based in Montreal. We haven’t known one another for that long – we met in January of this year, thanks to Kathy Kennedy – so I’m reluctant to comment on her musical tastes but she has an extensive background in composing and performing electroacoustic music. Her bio says that she’s “finding a balance between digital processing and organic sources”.

PAN M 360: Can you describe some of your working sessions? The gear involved, each contribution, the whole spirit of this project.

SD:  The music on Mûremers comes from two or three jams that we did just prior to the lockdown back in March. In general, we enjoy the idea of playing and recording ourselves in a simple, low-fi, low-pressure fashion. We didn’t set out to create an album of this music however, which is why it has so much life to it I think. We simply wanted to document our explorations. Once we began to listen back to our sessions, however, we realized that there were many special moments, some long, some short, some explosive, some gentle and harmonious, some naïve and funny, some sad and brooding. We covered a lot of emotional ground in a short time! I have a very basic set-up. I use two TC Electronic guitar pedals that have delay, reverb, looping, and reverse functions on them, along with an SM 58A Beta mic. I also played some melodica and acoustic piano in our sessions. Véro uses various kids’ toys that she has inserted pick-ups into, several mini beat machines, controlled feedback techniques and pedals, as well as her voice at times. Because we didn’t plan to mix and release this music as an album, my mic and her sounds were all going through one channel on her mixer which made things a little tricky in the post-production stage, but we embraced the process and decided to accept “what was” as “what would be”. I added extra vocal parts to a few pieces and in some areas we layered bits from other moments in our jams to create a varied collage of sound but most of what one hears on the album was how it came out initially.

PAN M 360: Does this project have something to do with free jazz, but the textural spectrum is much wider than what we hear from acoustic or electric instruments?

SD: I feel that we’re sitting a good distance away from free jazz (as I know it) in this project. Certainly improvisation plays the largest role in what we’re doing though. My pedals are digital but I’m pretty sure most of Véro’s machines are analog. I also sometimes like to use an unaffected vocal sound alongside affected vocals through pedals so having two mics on hand is ideal.

PAN M 360: Is it an issue for this musical path, often redundant in free improvisation with “traditional” jazz instrumentation?

PAN M 360: Is there a dramatic structure in those 10 pieces? How did you imagine this “storytelling”?

SD: As I mentioned, we did not set out to create an album or a story with this music. The narrative surfaced on its own and I believe it’s rooted in the mysterious beauty of nature and the absurdity of human behaviour. I think we all have recurring “themes” in our lives and as creators we often use art to express some of those themes. I try to always tune into whatever sort of emotional string is being plucked in me in any given moment and if I feel that spoken words are needed to enhance the story, for example, I will read from the various poems and texts I’ve written over the years but in a way that strives to feel fresh and new. Sometimes I’ll just start speaking, not aware really of what is going to come out. In other cases, I will draw out certain words or lines from books that have inspired me.

PAN M 360: Are there some other musicians involved in the live version of this new record?

SD: We will be playing with Claire Devlin (saxophone) and Ana Dall’Ara-Majek (theremine) for the Off Festival show, but otherwise we haven’t discussed involving other people in this project.

PAN M 360: Can you see some precise achievements in this project?

SD: From a work-ethic standpoint, I’m proud of the fact that we took the time to complete this project from a distance during the lockdown. The album was performed and produced entirely by us, including the cover image which Véro created, and this process was a first for me. I’m also glad that we are willing and able to bring this music to the public (!). The fact that L’Off Festival de Jazz booked us and Jeunesse Cosmique has agreed to help us with the release is really encouraging. From a playing standpoint, I’m proud of our ability to continually remain open to our internal voices and to greet those impulses with gratitude and confidence. I feel that Véro and I have fairly different musical backgrounds, along with a substantial difference in age, and yet we are somehow able to find common musical ground and inspiration, which is really gratifying and inspiring.

PAN M 360: What about those apparently key words: Dottir? Mûremers?

SD: Because we both identify as women and we wanted an unconventional sounding name from a Nordic part of the world, Dóttir seemed fitting. As for how we chose Mûremers as a title, given that we’re a bilingual duo, we initially tried to find a bilingual title for the album. After going through several lists of titles though we eventually settled with Mûremers, which we thought some anglophones might mistakenly pronounce as “murmurs” and our music can sound like that at times so we liked that connection. In addition to this, we wanted the title to capture the organic and fluid nature of our music, hence “mers”, which also sounds like “mères” (and Dóttir, as you know, means daughter), so that was an interesting play on words as well. And finally, “mûre” refers to the fact that we feel that this music is ripe and ready to be experienced… and we love blackberries too!