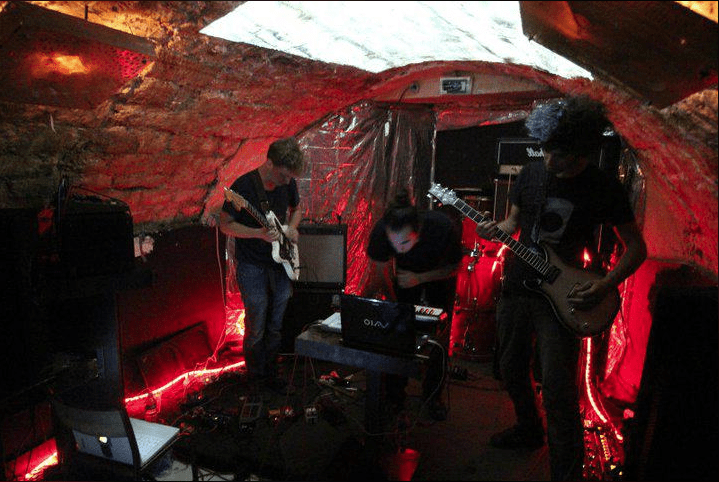 Chaos E.T. Sexual: A darkness full of emotion and meaning

Only Human Crust is full of emotion and ironic allusions to politics and culture, with a sound atmosphere worthy of the great science-fiction films.

Whether it’s the name, the music, or the commitment through its lyrics, the group Chaos E.T. Sexual is everything and its opposite. The collaboration of Thomas, Tarik, and Yves is truly unconventional. However, the music and the love for the drone/doom style brought them together for the better. On November 20, their third album Only Human Crust was released. They spoke to PAN M 360 about what attracts them more and more to this musical darkness.

CHAOS E.T. SEXUAL: We met at university, but in different contexts. As far as Thomas and myself (Yves) are concerned, it was during a bossa nova class. Quite paradoxical when you know that we are two big metal fans. At the time, we used to play Pantera together at home. As for meeting Tarik, it was also at university, in the same class. However, the friendly relationship took another dimension when we all met together at the HellFest festival. It’s afterwards that Tarik joined the band, when we needed to add a rhythmic base to our compositions. He was immersed in hip-hop and was already producing a lot of sounds. We had a particular affection for these two musical styles, hip-hop and drone, which we saw fitting together logically. It didn’t take long before we all composed together, and the magic happened.

PAN M 360: It took six long years before the release of this new album, why did it take so long, and what was your state of mind when you recorded Only Human Crust?

CETS: Like everyone else, we all have our own distinct lives, and experience emotions and events that are personal to each of us. During these six years, we questioned ourselves and lived many things. We had come to the point where we wanted to take a musical turn. We wanted to create something more alive, more danceable. But our love for the drone and doom style caught up with us. In particular, the fact that we play together all the time made this album take a darker turn than the previous one. We are attracted by melancholy and coldness. We live in an increasingly anxious society and the compositions of the last two years are a bit like our catharsis that we needed to express unconsciously. So the year 2020 has nothing to do with the atmosphere of this album, as is said a lot on the Internet. The album was even finished in January of this year.

PAN M 360: This new album is very heavy, dark, with an atmosphere worthy of a horror film – how did you create such an atmosphere, and what drives you into it?

CETS: You probably already know that we are very inspired by science fiction, horror films, politics, both good and bad. The paradoxes of these worlds can be found in our compositions and that’s what makes our style and also gives this atmosphere. When we open our album with a speech by Vladimir Putin who praises democracy and freedom of expression, it’s funny. The dramatic and sinister sides of the character fit our musical style. With the guitars, we try to work on the massive side, and the drums come to sublimate the balance of power between the frequencies. The tempos are very slow. We like that, playing in slow motion and as loud as possible. The drums play an important role in the interaction with the guitars. The power of this instrument is the highlight of our style. We have songs at 50 BPM, which is very slow and also allows us to convey a lot of emotions.

PAN M 360: As such, many songs are well over six minutes long. Is it the musical style that wants this or is it a way for you to convey emotions?

CETS: To take the example of the title Asylum, it was for us an exercise in style. That is to say to retranscribe in a minimum of time the emotion and the power of a title that usually lasts six minutes. But by doing this experiment, we realised that we succeeded in transmitting emotions in spite of everything. However, the length of the songs is linked to time. Imposing an atmosphere and telling a story. Taking time for that is necessary. We pay particular attention to the story told in our albums and slowness accentuates feelings and emotions. When we play on stage or even in the studio, we like the trance-like feeling that comes from these slow sounds. You have to raise the desire and that takes time. When we compose, it’s the same thing. This state of trance is common to the three of us, that’s why the alchemy takes each time.

PAN M 360: At each introduction to your albums, a political discourse is present, is it to be seen as a commitment of some kind, and what do these personalities inspire you?

CETS: Not necessarily a commitment, more an interest in the impact of the lyrics which coincides perfectly with our musical style. Characters like Vladimir Putin arouse our curiosity. He’s a sulphurous political figure whose speeches fit very well with our style. On the previous album, we used a speech by Salvador Allende, the socialist president of the Republic of Chile in the 1970s. One shouldn’t see any political perspective in it, but rather what the character reflects as an image. It’s a way for us to denounce artistically, by turning certain political speeches into irony, as on the track “Holy Liars” from the previous album. It also allows us to create dark and heavy atmospheres.

“Tomorrow Prudence” is the speech of Houari Boumédiène, President of Algeria in the 1970s, at the UN, which highlights the interference of France and Western countries in Africa, with the theme of colonization and the fate of migrants in certain European countries. And for that, you have to learn and read about what happened beforehand. Each sample of this type is reflected upon. It’s the result of historical research, which unfortunately always fits in with current events.

PAN M 360: On this subject, beyond political discourse, what are your other sources of inspiration in film, art, culture, and even society?

CETS: We are great lovers of cinema. So, when it’s not the speeches of dictators that inspire us, it is the great science-fiction directors. For this album, there’s Emir Kusturica and the film Time of the Gypsies, from which we used an extract of the soundtrack. It’s a post-war idea, as with the film Underground by the same director, whose apocalyptic side is very interesting in terms of sound. Like the loss of a lost paradise where everything collapses. The title “Solace Exhaust” was invented around that, linked to destruction.

On “1674-Now: Many Thousand Gone”, we can hear a gospel and a slave song, also following a trip to the United States. The sample is not only used for its musical aspect, but also for the interest it arouses. There’s a search, an idea to convey a message. The sample of the track “La Française des jeunes” is taken from the French programme Strip-Tease. An edgy show that highlights people’s everyday life, but in an ironic way and always with a kind yet funny look at the same time. A vision of things that’s similar to ours, and which is also found in our albums as well as in the name of our band.

PAN M 360: You said you wanted to write a story on each of your albums, how do you conceptualise your albums?

CETS: There is no calculation in the creation of our music and the concept of the albums, we go by instinct. Once we have the beginning of a song, we’re going to make the most of it, to see how far we can go and what we can do with it. There’s always a message behind each of our songs. We always work in successive stages without necessarily thinking that we’re going to do this or that concept for this or that song. We prefer to have material and let things mature. That also explains why we worked on it for six years. Time does the work too and participates in the creation of our songs. We often find an emotional framework on each one of them, which allows us to compose more easily. Ideas become clearer with time.

PAN M 360: We were previously talking about commitment, artistic, cultural, and political; there seems to be a certain meaning given to the cover, can you tell us about it?

CETS: We already knew what we wanted, and we called on one of our friends whose artistic vision we really appreciate and share. The idea was to describe a society based on the omniscience of the powerful who are represented by towers of governance, faced with parasites represented by rats trying to revolt. La planète sauvage is another animated and science-fiction film that inspired us. As for the pastel colours, they give a sense of opposition to the dark side of the album.

PAN M 360: Your band name is quite unique and recognisable, can you give us a rational explanation as to its meaning?

CETS: (laughs) The story behind this stage name is long and peculiar to us, but in short, it comes from an expression that a Peruvian friend often used during the concerts we all attended together. It was intended to show that there was a correlation between men being overweight and their libido, and that it was not related to alcohol consumption. From there, we took this expression away and the word ‘chaos’ contrasts perfectly with sex and music. E.T. is none other than the character in Steven Spielberg’s film of the same name, which also defines the group, since we are all three of us passionate about cinema, science fiction, horror and many other genres. All in all, the name represents us perfectly, the ironic side contrasting with the dark emotion of our music.