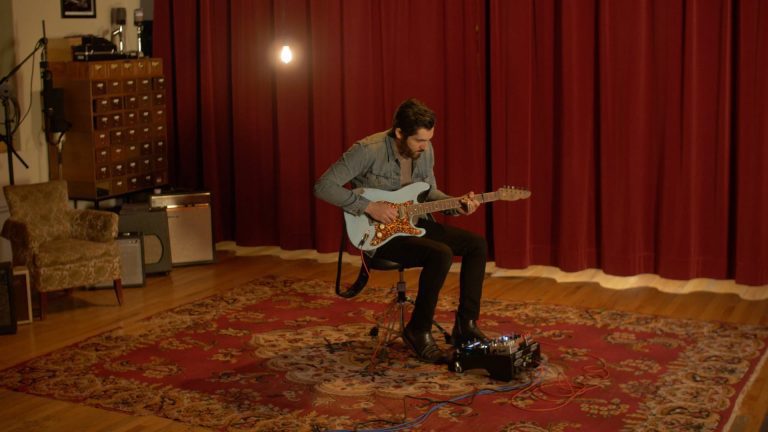 Blue-eyed soul and feeling the moment with Ariel Posen

Ariel Posen, a singer-songwriter/guitar virtuoso from Winnipeg—who spends his time playing with The Bros. Landreth and has been given praise from the likes of John Mayer—found himself with an idea and loads of time last year. Around the time of the rollout of his album Headway, Ariel booked some studio time in Montreal to record a few instrumental tracks and some video.

He ended up coming out with a full instrumental album called Mile End, a change of pace from his singer-songwriter sound. It’s an album that probably never would have been created if it wasn’t for the pandemic, but it expresses another flavour to Ariel’s rootsy blues sound and again, conveys how adept he is at song arrangement.

Ariel had some time to chat with PAN M 360 about his latest project before he opens for Bahamas in early December.

PAN M 360: What made you want to record a full instrumental guitar album?

Ariel Posen: I used to do a lot of demo videos for companies and I’m just used to just playing solo like that. Half of me doesn’t consider Mile End a record, because it’s not the amount of work and time that goes into writing songs like on Headway or How Long. But basically, what happened is that I had the time. On my first record, How Long, when I recorded it, I only had seven songs and I wanted a full 10 track record. So I actually just had three little solo pieces that I just recorded as interludes. So when I did that, people would reach out and say, ‘Hey, we really, really liked those solo pieces. Would you ever do something more like that?’ And I always just kind of pushed it off, but it always seemed to have a warm reaction.

PAN M 360: So the idea has been on your mind for some time then?

Ariel Posen: Yeah and this past year was weird for everybody. We all found ourselves with a lot more time than usual. I’d put all this time and energy into Headway and before it even came out, I hadn’t had some time to record. So my plan was just to go into a studio and record some video or have some content put out. There was no pressure of making a record. It was just simply see what happens, hopefully get some cool videos out of it. I went in there very casually, and had a bunch of pieces that turned out better than I thought. So it’s an album, but it’s also not.

PAN M 360: So the videos of you playing the album live on YouTube are those video recordings?

Ariel Posen: Yeah. It was all live-off-the-floor. All these songs were so improvised and it was very in the moment.

PAN M 360: I think my favorite track on Mile End is “Clawhammer.” Maybe just because of the name or the intensity, but do you feel giving names to instrumental tracks influences how they sound?

Ariel Posen: I have a really hard time giving names to songs that don’t have words in them. I just tried to think of a title that somewhat suited the vibe and the sound of the song. And for “Clawhammer,” I wanted a word that sounded somewhat aggressive, but also kind of cool sounding. I also have a lot of friends who play clawhammer-style banjo. The song has nothing to do with banjo playing and doesn’t resemble any kind of banjo-like clawhammer technique, but it’s just the word that came into my mind. And it’s kind of the same with all the other songs. One song felt like after a big rain, so yeah, I try to not be too precious or too deep about the names.

PAN M 360: And for the song and album name, Mile End, is that linked to Montreal?

Ariel Posen: The studio I recorded it in was in Mile End, but the phrase ‘mile end’ just sounds like the end of the road. Like you’ve been driving a long time and now the journey is done. Not saying my journey is done, but I wanted to gravitate towards that vibe for this record.

PAN M 360: One thing I find so refreshing about your playing is that you give space for every solo or lick on guitar. There are so many guitarists that just shred and hit as many notes as they can to show skill.

Ariel Posen: I’m always wanting to serve the song. So even if the song is a solo guitar interlude, I want to try and be in that moment and do nothing more or nothing less than what that piece needs. I just want to connect with whoever’s listening to it and to get someone else to connect to it, I need to connect to it. And shredding, as you said, doesn’t really fit. Like if you’re gonna play basketball, you don’t want to just dribble really fast or like spin the ball on your finger the whole time. It’s a bigger picture with making music than just trying to show off your skill.

PAN M 360: And when you perform, opening up for Bahamas, is it going to be the Mile End stuff or the more singer-songwriter stuff with your band?

Ariel Posen: So I’ll be playing the singing songs with the band the song and I might hint at Mile End in a few songs with a little solo or something. That’s why I say Mile End is such a side project, like a departure from what I normally do, for fun.