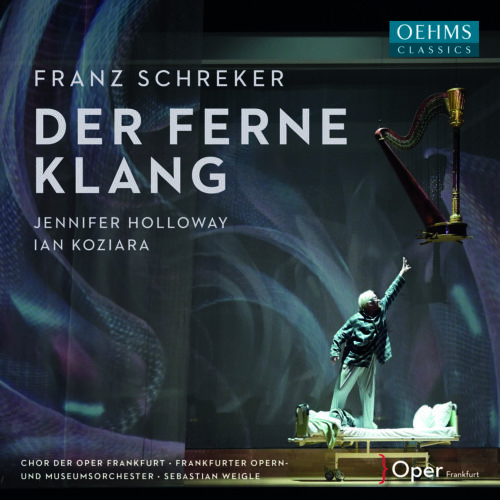 If you particularly like the orchestral and lyrical worlds of Debussy and Richard Strauss (add a bit of Puccini here and there), you will very much enjoy this opera, Der Ferne Klang (A Distant Sound), premiered in 1912 and composed (libretto included!) by Franz Schreker. Schreker was one of those composers declared “degenerate” by the Nazi idiots because he was Jewish and associated with the progressive intelligentsia of modern Germany. Unlike many others who died horribly in the camps, Schreker didn’t wait for the worst : he passed away as early as 1934, one year after Hitler and his pack of scum came to power, depressed and humiliated because he had been deprived of any possibility of supporting himself.

Nevertheless, history has retained some of his high-level compositions, including this opera, the best known of his ten or so. Der Ferne Klang has the distinction of not being, despite the discretion of its composer in the usual operatic canon, a totally unknown work. This is the fourth recording, which says a lot about the interest it continues to arouse in the milieu, despite the obscurity in which it still languishes as far as the general public is concerned.

The story is about Greta, in love with Fritz, a young composer in search of inspiration (the “distant sound” or ferne klang). They lose sight of each other and finally meet again at the very end of the work, undermined by the hardships encountered in their lives. Fritz has finally discovered what this famous distant sound was (you have probably already guessed it) : it is love. But it is too late, he has exhausted his life in this vain search and dies in the arms of Greta.

I hope that this recording from Frankfurt, directed by the skilful Sebastian Weigle, will convince many to take the plunge.

For what a marvel it is! Schreker’s orchestrations are breathtakingly beautiful. Iridescent, opalescent and glittering, perfectly blending fleshy shadows and vibrant light, they plunge us into an inexhaustible sensory feast. Shrecker’s lyrical language is natural, powerful, and intimate at the same time. It requires strong chests but also a delicate temperance that favors performers who are well endowed with theatrical skills.

Schreker’s genius lies in his renewed use of motifs and techniques derived from Romanticism and the theoretical canons of composition, but geometrically triturated and subtly transformed to insinuate modernity without abandoning the impression of familiarity, and thus the appeal to the non-specialist listener.

The orchestra and the choir under the direction of Sebastian Weigle realize treasures of finely embroidered magnificence, so much so that the score is often written as grandiose chamber music.

The voices are beautiful, mobile and generally easy. Jennifer Holloway as Greta succeeds in conveying the necessary range of emotions associated with the role (the most demanding in the play). Fritz, more subdued, is well handled by Ian Koziara. His tenor could sometimes be more assertive, but the character himself can live with this weakness. The most important drawback is to be noted in the interpretation of the Old Lady. A voice that is sometimes off-center and a monumental vibrato create an unpleasant feeling of amateurism. The character may be old, but I’m sure Schreker didn’t want to make a caricature of her. Fortunately, this role is relatively small in the ensemble.

All in all, and despite a few minor details, this must be considered an essential release, and perhaps the best on the market of this still unknown masterpiece. A dream : one day the Opéra de Montréal will dare to program it….