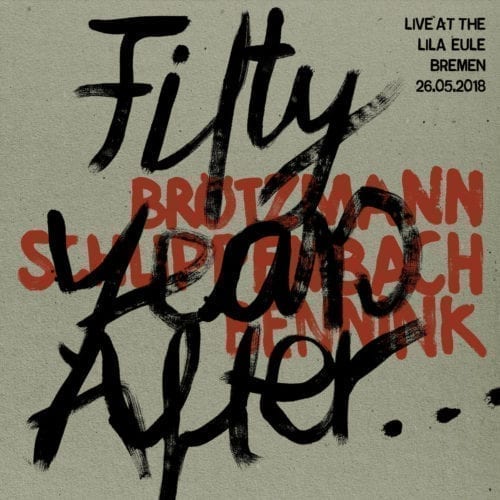 May 1968. While student demonstrations cause chaos and a general strike paralyzes Paris, Germany’s Peter Brötzmann and seven musicians record Machine Gun in a jazz club (now a discotheque) in Bremen, and it’s a landmark of musical radicalism. Firstly because it’s probably the first truly European group – apart from Brötzmann, there are two Germans, the double bassists Peter Kowald and Buschi Niebergall, an Englishman, the saxophonist Evan Parker, two Dutchmen, saxophonist Willem Breuker and drummer Han Bennink, a Swede, drummer Sven-Ake Johansson, and a Belgian, pianist Fred van Hove, all musicians who are still in the early stages of their careers – but also and above all because this Machine Gun is incredibly ferocious. From the first salvo of the three saxes, you’re blown away, and the energy level is maintained at that level, the needle firmly planted in the red, until the end.

To mark the 50th anniversary of this milestone in free jazz, Brötzmann invited his compatriot, pianist Alexander von Schlippenbach, and his old friend Han Bennink to the same club in May, 2018 for a small trio concert. The three musicians were so pleased with the result that, in addition to releasing the concert recording, they have continued to perform as a trio ever since. Of course, the result doesn’t approach the astonishing strength of the octet of yesteryear, but the three friends have lost almost nothing of their enthusiasm and they get along like thieves in a fairy tale. Bennink shines particularly brightly, without overdoing it. The recording quality is pretty much the same as it was 50 years ago, but that doesn’t matter, because atmosphere abounds!