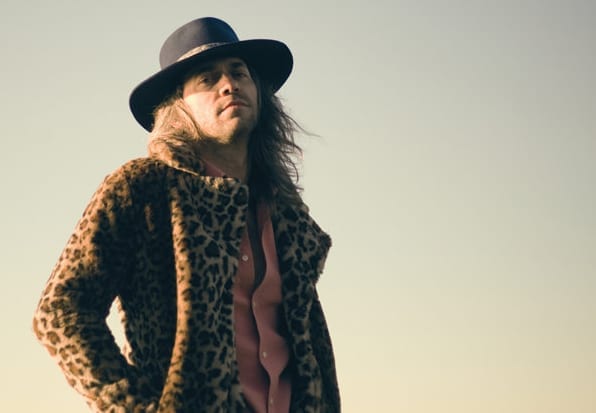 Antoine Corriveau: The slap (in the face) and the territory

On the album Pissenlit, Antoine Corriveau combines a burnished voice and acidic poetic introspection with strong, even rough music.

In the fall of 2018, a few dozen at a transitional concert by Antoine Corriveau and a band built around Simon Angell (Patrick Watson, Thus Owl) were stunned witnesses to the premises of a new cycle of creation: more rock, more noise, more punk, more art-rock, clearly outside of the consensual parameters of Quebec. Against all odds, a big wow! The Feu de forêt EP was released during this period and… here we are in October 2020.

Two years later, this same cycle is in full swing with the imminent release of Pissenlit on Secret City Records. This album puts the writer, composer, and performer on a very singular track. A change of personnel, a new musical direction, audacity, and some of the best lyrics to come from the local songwriting community. Could the 35-year-old man have acquired the maturity essential to long careers? Ask the question of Corriveau, and more are sure to follow.

Antoine Corriveau: I agree. It’s really another approach. When I presented this concert and released the EP, it was the first time I played with this new core of musicians. My challenge then was to work without string arrangements, as I had done for the previous album and the concert that followed. It was a question of seeing where it would go. At that show two years ago, we had an almost punk segment. I really liked that! I felt like putting together a show where I would come off the stage more tired! In this new cycle there are elements of music that I’ve been listening to for a long time and that I’m starting to digest. Today, I’m not trying to do the same thing again.

PAN M 360: This third studio album is the result of a very different methodology from the previous ones. Can you briefly explain what it’s all about?

AT: I first invited five drummers to play together in my room, I wanted raw material to compose from their beats. I suggested a tempo they should play, I let them take off. Immediately, the impact was felt: I composed differently. I tried to identify usable segments and I composed around them with a bass or bass synth, rather than a guitar or piano. If I sit down at the piano or with my guitar, I find my comfort zone, which I won’t deny; there are softer songs on my new album, it’s important for me to make these ways of doing things fit together. I’ve imagined moments of respite, otherwise the album would just be slaps in the face and breaks in tone. So at the beginning, I didn’t have chord structures, I just had a fundamental around which I added stuff. Then I would call in other musicians, without sending them material they could prepare themselves with. I would record their material, and then I would clean it up. I had a bank of other guitar riffs that I would try to mix with beats or other contributions from the musicians who came to my place. I also recorded alone with a bassist or drummer. Many paths would lead to the same place. And it fell on my shoulders.

PAN M 360: So you were the one who led the entire production project and provided the musical direction?

AC: Yes, I had never done that before. It was done instinctively, naturally. It was also a challenge I set myself, to see how far I could take this project. For the previous one, I relied heavily on Marianne Houle, who created the string arrangements. In this case, I wanted to go as far as possible myself, based on the contributions of the musicians.

PAN M 360: With few exceptions, your group is pretty much the same as it has been since the beginning of this new cycle. Who are these artists?

AC: I hire musicians that I respect and like very much. Their contribution is very important to me. Stéphane Bergeron (Karkwa), drums, Marc-André Landry (David Marin, Chloé Lacasse, Tire le Coyote, etc.), bass, Simon Angell, guitars and arrangements, are at the center of the project, they play on almost all the songs. Erika Angell (vocals) also joined us for some sessions. The same core will be with me on stage, when the conditions allow it, and also at the virtual launch of the album – October 13. On keyboards, Sheenah Ko (The Besnard Lakes, etc.) is added to the band. We are currently rehearsing to edit the songs we never played other than during the recording process.  We’re kind of relearning, in a way. We don’t have the same contingencies as on the previous album with strings, it’s simpler. With guitars and keyboards, we are very close to the versions of the album, and our live versions will make the interpretations evolve. After the virtual launch, however, everything becomes blurred again on the live side.

AC: I sing as I sing, I do my thing as before. But I’ve allowed myself more freedom in interpretation. At times, for example, I sing in high notes, which I didn’t do before, but it’s not a revolution. How do you describe moods and emotional states? There is a second degree in the tone, an irony, something quite close to me. I have allowed myself to go further, to give myself more.

PAN M 360: We can see that your poetic environments have changed to a degree. In what ways?

AC: Perhaps it’s more direct, there’s less fog in the writing. I spent a week in a workshop with Gilles Vigneault, and had lots of discussions with artists about songwriting. I myself taught it a bit at the Granby song festival. You give a speech about clarity, and then you question yourself. As I get older, I have to say, I have less reservations about revealing what I really think. That’s where clarity becomes essential. Wanting to show that we can write is also a fear of saying things that are personal to us. I told myself that if I couldn’t do that, there was no point in writing. And I worked harder than ever on the lyrics. Also, I took the liberty of writing more Quebecois words, which I wouldn’t have done before. I’ve lost my complexes about that. That’s why I think it’s my most keb record.

PAN M 360: Choose songs that are representative of the album, spontaneously, and tell us about them.

AC: Okay. I’ll take “Quelqu’un” first. The first half of the song was the first literary gesture of this album. I had just given a writing workshop on identity at that time, and I asked the people who had signed up to do it to talk about themselves. I told myself then that I had to give myself up too, that led me to push the idea further for this album project but… I was stuck for a long time with half of the text, unable to finish it. Then I had discussions with a psychoanalyst neighbour, we talked about childhood, the symbolic death of the father and other subjects inherent to psychoanalysis. That led me to dig out something hyper-personal, it was the spark that allowed me to finish this song… a year and a half later!

PAN M 360: This introspection was also linked to a revision of your identity, this album is full of evocations of Quebec’s culture and territory, of its farflung regions. Roads, cars, houses, thoughts, feelings… and what else?

AC: Taking the example of the song “Il parle”, a bunch of stuff. I’ve been thinking a lot about the division of the territory… how do I fit into that? I felt guilty about our people’s history with the First Nations. I had discussions on the subject with my father, who grew up in Abitibi and lived close to the reserves. I also talked about it with people from the North Shore when I performed there, and did an artist residency in Natashquan. With friends, I remembered brief our history classes on the Amerindians were – the fights between Montcalm and Wolfe took priority. We don’t talk about this issue in enough depth, we have a hard time with more challenging discourse, we have a hard time with what intellectuals think about it. Personally, I have a lot of difficulty with the management of the indigenous question in the public sphere. My misgivings are also related to this fear of immigrants in Quebec, to this fear of other religions and other cultures, to this fear of disappearing. In retrospect, racism is an issue that was very much on my mind while I was writing the lyrics for this album. In the song “Les sangs mélangés”, the chorus line is not mine but an adaptation of a phrase by Éric Plamondon, from his novel Taqawan. I found a song refrain there – “En Amérique, on a tous du sang indien, si c’est pas dans les veines c’est sur les mains.” (In America, we all have Indian blood, if it’s not in our veins, it’s on our hands.)

PAN M 360: Your evocations of the Quebec territory are not limited to the Indigenous question, there’s also the river and the sea, no?

AC: I took full advantage of that when I was on tour, and also when I was looking to buy a house in the Lower St-Laurent area. I did a wide sweep, I visited several places. I came within a hair’s breadth of buying a house in Saint-Fabien-sur-Mer, at the foot of the cliff. It didn’t work out, but it made me write a story: “Peut-être”. Buying a house by the sea in 2020 is a strange idea, it’s very risky. So I questioned myself about my motivations, I went far into the fantasy. I imagined an apocalyptic scenario where the character in the song settles on the seashore because he wants to have a front-row seat at the end of the world. As for me, I finally bought in Bic… but high up! We have a great view of the sea.