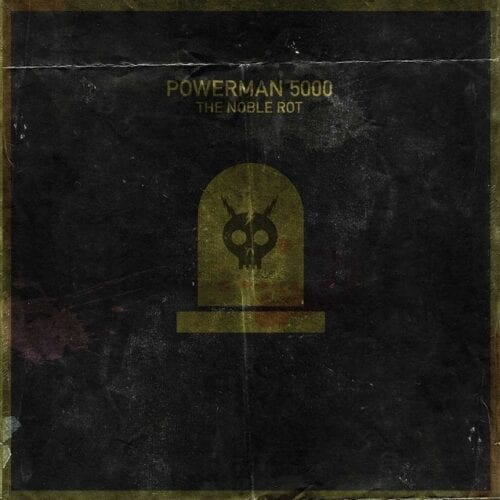 Powerman 5000, for those who don’t know them – or have forgotten – is a nu-metal/industrial band that left its mark in 1999, with the album Tonight the Stars Revolt! It set the Minnesota natives apart from their peers, propelling them to Hollywood. Certified platinum by the RIAA (more than a million copies sold), the album reached number 29 on the Billboard 200 and the single “When Worlds Collide” was placed in a number of video games, films and TV series, including Beverly Hills 90210.

On their first opus Mega! Kung Fu Radio (1997), the members ventured into funk and hip-hop, before finding their place in a heavier niche and then staying there with the consistency of a marathon runner. Here now is the tenth album from these veterans.

Although they’ve always been inspired by science fiction, they offer a heartfelt tribute to the 1980s with The Noble Rot. Like the single “Black Lipstick”, the album is rather anchored in darkwave and new wave, like The Cure and Depeche Mode. The singer’s subterranean and vaguely erotic voice hasn’t changed in 25 years; Michael Cummings is still an expert at vocal fry and other purring sounds that won’t leave a listener cold. If some of the lyrics seem a bit too easy, social criticism is still very much present. “Special Effects”, for instance, demonstrates a disgust with the falseness of social networks. In short, what we can learn from PM5K is that the band will never repeat itself, and we can be excited about what’s next.