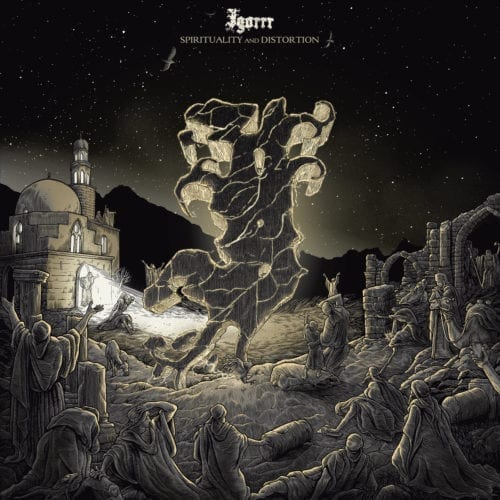 Igorrr is the project of the French “mad scientist” Gautier Serre (also a member of Corpo-Mente), and although they’ve been around since 2005, the band has only performed on stage since 2017. That same year, Savage Sinusoid was released, causing quite a commotion within the metal scene. What does Igorrr have in store for us now?

The core of the band’s work is based on contrasts: filth and purity, vulgarity and refinement, jaggedness and fluidity, violence and sweetness. Ambiences “bipolar” to say the least, but surprisingly, we don’t get lost in them, the album being more unified than the previous one. On Spirituality and Distortion, we find oud, violin, accordion, harpsichord and kanun, in addition to the usual guitars, drums and bass. It might be dizzying, but we can only applaud this variety. In Igorrr’s case, it works.

The Middle Eastern sounds fit perfectly with the band’s own, as witnessed on “Camel Dancefloor”, “Overweight Poesy” or “Downgrade Desert”. Baroque passages and breakcore sprees alternate and are superimposed on “Nervous Waltz”, a kind of crazy surrealist waltz in which the guitar is not very present. The band’s sound is nevertheless metal at its base, black metal (“Paranoid Bulldozer Italiano” or “Kung-Fu Chèvre”) or death metal (“Parpaing”). The latter could almost have passed for an ordinary song in this style, until a deconstructed chiptune rhythm appears, over which George “Corpsegrinder” Fisher (from Cannibal Corpse) busts his lungs.

And as if all this innovation wasn’t enough, the band of crazy creators has another peculiarity: they don’t sing in any known language. Gautier Serre, Laurent Lunoir and Laure Le Prunenec use a language created from spontaneous emotions and intuition (apart from the song titles). You can see the lexicon here. Peculiar.

In short, Spirituality and Distortion could really have gotten lost in its own meanderings, but the schizophrenic creative urgency that emanates from the final product is savoured note after note, from the first listen.