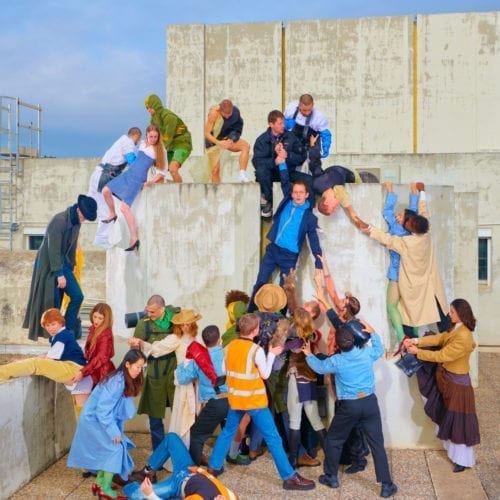 Ever so assiduous, French composer and musician Erwan Castex, aka Rone, has been a regular presence on the French label InFiné since 2007, with a new album punctually every two years. His creations, always very conceptual, open the door to an invigorating and very colourful electro universe. This new effort, Room With a View, is the counterpart to the show of the same name that he presented last winter at the Théâtre du Châtelet, in Paris, with a troupe of 18 dancers from the Ballet National de Marseille. It’s understandable that the imposing concept behind this record represents the most ambitious challenge of his prolific career.

Even though the show is about the reaction of the younger generation to the ecological, economic and societal collapse, rather serious as a theme, Rone’s music remains relatively positive and highly sensitive. Skillfully playing with styles and crescendos, the Frenchman manipulates sounds as few electronic music artists of our time know how to do. In addition to the usual synthesizers, the 13 compositions contain a wide range of instruments: harpsichord, organ, guitar, flute, gamelan, brass. There’s even a superb choir on “Human”. Rone offers us a rich album, sometimes suggesting of a more cinematic version of the U.K.’s Jon Hopkins. The more ambient track “Lucid Dream” and the first minutes of “La Marbrerie” evoke the legendary Boards of Canada. Barely 40 years old, this prodigy shows once again the extent of his talent. The follow-up looks promising.