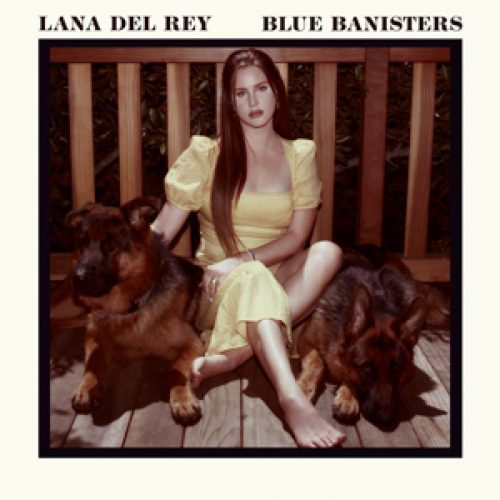 The day after the publication of our review of Chemtrails Over The Country Club, released last March, Lana Del Rey already announced a second album to be released this year. We wanted to tell her not to rush anything. Indeed, the album Blue Banisters, while irreproachable on the level of the production, is nevertheless a variation on the same themes, the same chords, the same subjects… the same songs? Oh no, but you would have sworn that… That said, this recording does contain a handful of noteworthy pieces.

First is “Blue Banisters”, whose power is derived from its simplicity, with minimalist arrangements and Del Rey’s voice carrying the song. Also “Arcadia”, a ballad punctuated by trumpets played in the manner of some traditional Mexican pieces. We are captivated by the frank and unapologetic tone of Del Rey’s promises of love on “Wildflower Wildfire”, a piano-vocal piece with catchy choral harmonies. There’s also “Interlude – The Trio”, which is a short excerpt from the late Ennio Morricone’s piece, remixed with trap beats. Finally, the most interesting piece of the album, “Dealer”, where she shares her voice (vocals and screams of exasperation) with that of the English musician Miles Kane: so different, they are a perfect match for this suave and slightly trashy piece.

But overall, one begins to spot a formula to the point of having a sense of déjà vu, as if some of the pieces or passages—watered-down versions—were taken from tracks off her more recent albums, even though Jack Antonoff didn’t participate in this one (her present collaborators: Dean Reid, Zachary Dawes and Drew Erickson, among others).

There are definitely some gems on Blue Banisters. However, perhaps Lana Del Rey will have to go on new adventures for renewed inspiration.