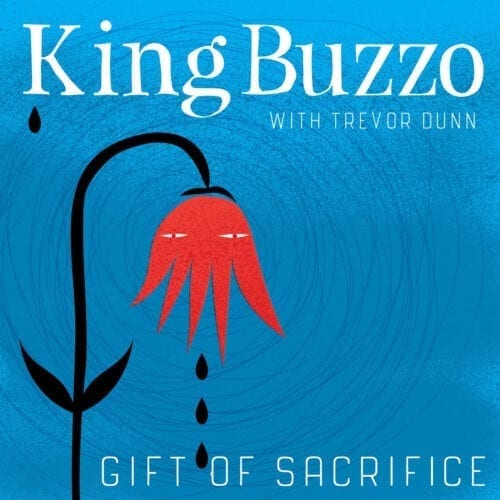 For his second solo album in his nearly 40-year career, King Buzzo, singer and guitarist of the scrappy Melvins, enlisted the services of bassist Trevor Dunn, a veteran of twisted rock experimentation with both John Zorn and Mr. Bungle. This new album is not, however, the first collaboration between the shaggy, buzzed monarch and the virtuoso of the four strings, since these unorthodox rockers are both members of the thundering band Fantômas, and Dunn has already accompanied Melvins on a few occasions.

“Mental Vomit”, the short instrumental track which opens the album, warns us: even if the two goons are in acoustic mode, this album isn’t crossing a beautiful, calm lake. Buzz Ozborne and his sidekick explore much murkier waters. The duo take a clever pleasure in blurring the surface of their songs by throwing pebbles of pure noise at them. The finales of the pieces on the program are often exploratory, even downright noisy. Ozborne sometimes sings as if he’s scared to death, more often as if he is the one who wants to scare the monster. Dunn, for his part, brings a jazz touch to the project with his free playing, especially in the passages where he uses a bow.

The presence of the double bass gives “Gift of Sacrifice” a depth that King Buzzo’s first solo album lacked. “Delayed Clarity” and “Bird Animal” are pearls of psychedelic folk, among the best songs Osborne has created in recent years, with or without Melvins. As a bonus, to show us that he hasn’t lost any of his derisive bite, he revisits ”Shock Me” by Kiss, here renamed “Mock She”.