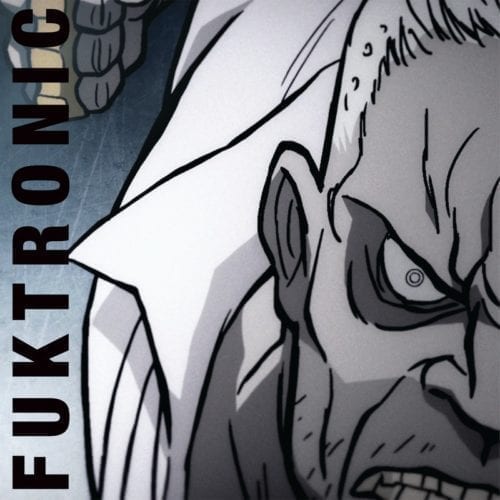 To create Fuktronic, Jimmy Urine, the avant-gardist mind behind the salacious electro-punk panoramas of Mindless Self Indulgence, joined forces with Serj Tankian (System of a Down) in 2012. Over time, this collaboration bore fruit, and the tandem developed the soundtrack to an imaginary film with the participation of musician and actor friends, with a script as a bonus. The results were therefore rather eagerly awaited.

On Fuktronic, we find characters created from scratch: British and Russian gangsters who swear every second word, and a femme fatale, an arrogant French woman (played by Chantal Claret of Morningwood), among others. The quality of the many accents used, although comical and exaggerated, demonstrates the great talent of the participants.

Jimmy Urine’s production skills are also showcased. The sound that has been MSI’s trademark for over 20 years is unmistakable. The lacerating guitars rub shoulders with the sparkling arpeggios of the synthesizer, and the whole thing is sustained by a thunderous rhythm that moves the songs forward like a marathon. You can also recognize Tankian’s signature style on some of the songs, sprinkled with traditional Armenian influences (“Guns”). With their slower tempo, clear guitar sound and soft piano, these songs are an uplift.

However, the intensity decreases over the course of a listen, as if the climax was reached in the first piece (“Chase”). “Ladies” and “Kit Kat Klub” slow the tempo down a bit, and the events of the second half are quite blurred. It may not be an album we’ll listen to over and over again, but it’s still a captivating entertainment, allowing the imagination to run free.