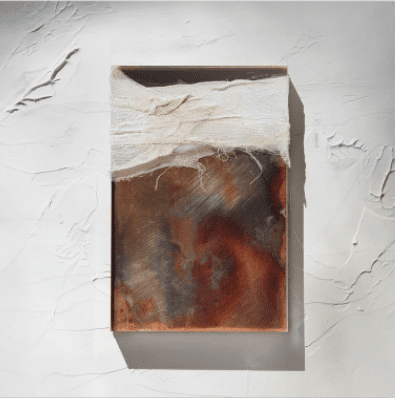 Of Polish origin, having lived in Detroit and now based in Brooklyn, multidisciplinary artist Jakub Alexander, aka Heathered Pearls, has been rolling in the electronic scene for a long time. Manager of Tycho and then DJ under the alias Aarnio, it’s under the name Heathered Pearls that he released Loyal in 2012, a first ambient album with hypnotic loops. This was followed by two albums and an EP of ambient, downtempo, and dance music, with repetitive patterns in common. On Cast, we find them combined with spoken word, creating the impression of a textured bandwidth that occasionally broadcasts the contents of a time capsule.

With few percussive elements, it is the arpeggio gestures, cycles of tension and release, and interlacing of patterns that generate the rhythm. In the opening track “Missing Heights”, simple piano notes are overwhelmed by the ebb and flow of floating layers of sound. On “Caveat Emptor”, sounds of plucked strings are reminiscent of the Japanese harp and form patterns that move like bubbles on water. The rhythm intensifies on “Ultra Blue”, where loops of synthesizers draw a dazzling landscape against a background of polyrhythmic pulsations, including a cyclic pulse reminiscent of a propeller in mid-flight. Then, depending on the track, the grooves refine or dissolve into masses of misty sounds, and allow the improvised poetry of guest artists to emerge, including Nick Murphy (formerly Chet Faker), Detroit techno legend Terrence Dixon, and multimedia artist (and Alexander’s father-in-law), Krzysztof Wodiczko. Similar to automatic writing and collage, their spoken word goes in all directions, addressing, among other things, the cult of the artist or detailing the emotional impressions that arise from ordinary gestures. This disorganized poetry encourages reverie and highlights the organic rhythm formed by the flow and inflections of the voices.

Heathered Pearls would have benefited from incorporating more nuanced transitions between certain pieces, but this is only a tiny hint. All in all, Cast is a soothing album that makes us leave and then tread solid ground in a loop.