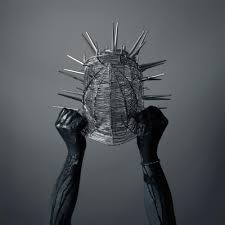 After the abrasive N/O/I/S/E (2018) and his lofi black metal project Baader-Meinhoff, Ghostemane brings us back to his creepy lair, revealing his dark, bewitching secrets.

Precise as a butcher, he’s cut thirteen pieces from the abominations of the world and his own, painting his recovery from an opiate addiction in shades beyond red (scarlet, burgundy, garnet, all variations are there). We have in hand a morbid colour chart, showing all the possible declensions of despair. Rare flashes of white are sometimes found, echoes of solitude, witnesses of the almost inhuman confinement lived in the aseptic place through which all drug addicts must pass. Ghostemane excels in the art of shedding light on our subterranean anxieties, through songs that sink into the memory like thorns in the flesh. The scars of his musical lacerations will be long-lasting.

Rather anchored in metal, with many songs that seem to be structured around the guitar (such as “Vagabond”, “Lazaretto” and “Calamity”), the final product however presents a new vulnerability, especially on “Falling Down”, the conclusion of the album where Ghostemane reveals himself almost gently (!) on haunting acoustic guitar. “Anti-Social Masochistic Rage [ASMR]” will send shivers down the spines of people who are receptive to the distinct sensations of ASMR sounds, a phenomenon documented in YouTube videos and elsewhere. Here, he whispers very close to the microphone, and you can hear his sibilant consonants (with Z or S or occlusive consonants – B or P) as well as his breathing. Moreover, “Melanchoholic” is a nice tribute to his roots ending with a piano rendition of the emblematic “Freezing Moon“ riff of the Norwegian black metal band Mayhem.

The artist also seems to claim (without ever really saying it) that we have every right to have multiple identities. A kind of subconscious message, a thread running silently through all his albums: to be only one thing would be very reductive. Yes, Ghostemane fuses trap with metal, industrial with hip-hop, mixes styles and blurs the lines, but he doesn’t just do that: he also blossoms through striking visual concepts. One only has to see the “helmet of pain” on the Anti-Icon cover, or his artistic make-up inspired by corpse paint. Ghostemane is an artist in his own right and one can feel it in the general aesthetics of the character and his extravagant costumes, with sharp false nails as a bonus. Adorned with his tactical and military jackets, he is the protector of all people who feel different, ready to raise arms to anyone who dares confront his army.