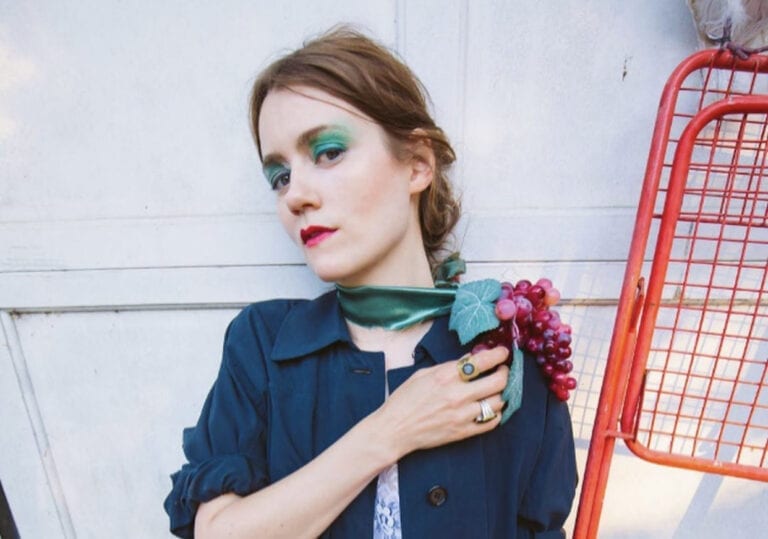 As part of Pop Montreal’s lineup, Lou Canon invites us to hear and experience her new album through her very first livestream performance.

Based in Toronto but very attached to Montreal, singer-songwriter Lou Canon, born Leanne Greyerbiehl, released her third album Audomatic Body in July. As the quarantine period eases off, it’s with much excitement that she accepted Pop Montreal’s invitation to present her new album via livestream, which will allow her to connect with the public, at last.

Audomatic Body is a sensual album where dark synths take over and voices sound like whispers. Greyerbiehl explains to PAN M 360 how these voices haunted her while she was creating her album, as well as how she prepared for her very first livestream.

PAN M 360: When we listen to Audomatic Body, there’s a sense of being led into an intimate, earthy, yet otherworldly place. How would you describe the emotions and the themes of the album?

Lou Canon: I started this album with a song called “The Chorus”. The name is borrowed from ancient Greek theatre, and it was anywhere from ten to 50 performers that would dance, sing, or speak in unison to offer insight to the audience and shape their expectations about what was going to come. The start of this album was very important to me – it was important that it was a voice that was not just my own. I think there are five or six people on that track. It was to sort of ease the listener into the experience of the album, asking him to soften and break down the walls and that mold of everyday expectations that we carry with us, and to turn inward towards the body, and to trust your body. When I was making this record it felt like it was bigger than just me, and I really wanted there to be a shift towards plurality, so that you would be able to enter and come into this other world and this sort of intimate space.

PAN M 360: This is your third album. How would you compare Audomatic Body to your album Suspicious, released in 2017?

Lou Canon : Suspicious started in Montreal when I went there for a few weeks and just shut down my outside world, and I ran and wrote and recorded as I was writing. Through that process I ended up finding Mark Lawson, my collaborator on both records. But I think the difference in this one was that there was a shift from singular to plural, and as I was working I really started to hear other voices, and that started from something simple like me pitch-bending and sampling my voice. From that moment I really became enamoured, or obsessed rather, of hearing other people’s voices on this record. In the end, there are ten other voices throughout the record, and that to me was a really important shift from Suspicious to Audomatic Body.

PAN M 360: Is there a common thread linking your videos on an aesthetic level?

Lou Canon: I think in general, the visuals for me are always a really important part of my project. In some ways they bear equal weight to the music. I’ve always been very attracted to the unusual and the awkwardness in video clips, photographs, and artwork. And images that are thought-provoking, that instigate in a way, that pose a question rather than providing an answer. So I try to build off that when I’m working on a video, an image, a photograph, or artwork, and that to me is what feels more natural. I really loved the way “Ancient Chamber” worked out. I worked with a director named Christopher Mills. I went to his place, and we had some general ideas sketched out, but it was just kind of me showing up at that moment with what I was going to do, how I was going to react, what I was going to wear, and it’s frightening but that’s the part that I really feel I can dive deep into.

PAN M 360: You’ll be presenting a livestream performance at Pop Montreal. How did you prepare for it?

Lou Canon: I hadn’t been doing any sort of live streaming in part because it doesn’t suit me as an artist to be sitting at a piano, with my iPhone taking a video. The thing that I really appreciate about what Pop Montreal is doing is that it’s a live performance but you’re submitting it beforehand, which is great because it takes some of the technology pressures off of the situation. It also allows me to translate the album into what felt more like a stage, rather than in my living room. I’m very fortunate to have a little studio space in my backyard. I bought these pink curtains and started setting everything up and diving into this performance. It took me a while to prepare for it because it was also the first time that I was truly translating the record live. But it was really fun and it came at the perfect time because I was in a bit of a dark headspace, having released this work out into the world and listeners appearing as numbers on a screen. You’re missing all that fantastic human interaction that comes after making something. So it was a nice outlet and I feel very excited to share it.

My family helped me out – they were my crew! My sister was sitting on top of a ladder in my studio with one camera, my brother-in-law Hayden, who’s also a musician, was on a moving camera, and my husband was on a still camera. So everyone was helping me sort of pull it off. I wanted it to feel very special, intimate, and true to something you might experience if you came to see me at a tiny little club.