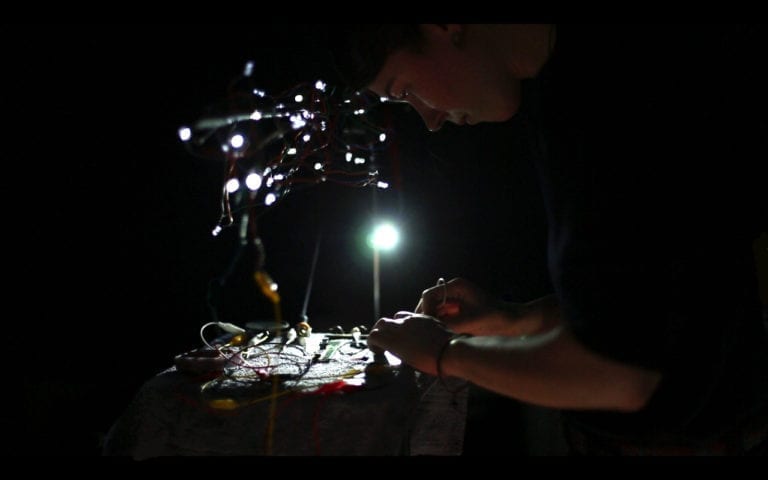 Léa Boudreau: The noise of toys

The spectrum of possibilities in electroacoustic music is immense, its practitioners frequently leading listeners well outside their comfort zone. Composer Léa Boudreau’s album Chaos contrôlé does just that, with a theme that is as bizarre as it is fascinating. With various second-hand toys, the Montrealer had fun making her latest creation. Here is the story behind this unusual idea that gave rise to a most surprising work.

PAN M 360: You mention that Chaos contrôlé resulted from the combination of your two greatest passions, order and disorder. Could you explain how you reconcile this love of opposites, in music?

Léa Boudreau: Basically, I talk about order and disorder in reference to the opposition between the exploration of the electronic circuits of toys – circuit-bending, trial and error, experimentation – which is rather ‘chaotic’, and the more ‘controlled’ and structured exploration of composition. These two parts of the creative process complement each other, to create what we hear on the album. Also, I’m a pretty organized and meticulous person in life. I like to make lists and be in complete control, but I think this aspect of my personality is generated a bit by anxiety.

The integration of a more playful and random approach to my creation – sound exploration through circuit-bending of toys – allows me to better tame my inability to control everything. It’s a bit like a forced self-care technique, especially in situations where I’m playing live. It forces me to work with the unpredictability of the sound responses of toys. At first it stressed me out and now, that’s okay, I can have fun. So, in the end, I say that these are my two greatest passions, but a more accurate formulation would be this: I like order and I’m learning to like disorder – for the sake of my mental health, and of my creations.

PAN M 360: At what point in your musical career did you start manipulating objects to generate unusual sounds?

Léa Boudreau: I’d been wanting to circuit-bend toys for a while, but it was really in 2018, during my bachelors, in digital music at the UdeM, that I developed that. The program didn’t offer a course for this practice, but I created a performance that I’m still presenting – this performance is no longer available due to […]. My performances are almost always different, I like to change my toy combinations and modify my sound-processing patch, but I like to keep this idea of using second-hand objects.

I’ve always been very impressed by people who can create things with almost nothing, with found objects, with scraps. You realize that you don’t need a thousand plugins and $3,000 synthesizers to create something beautiful and original. Plus, I love the ecological message inherent to this kind of practice, as well as the message of voluntary simplicity. Of course, it always takes a minimum of material, especially when making digital art, but restricting yourself to just a few elements is also a good way to sharpen your resourcefulness and creativity.

PAN M 360: Could you briefly describe the concept and the toys behind Chaos contrôlé?

Léa Boudreau: The basic concept for me was really to have fun with the toys, to literally play with them to bring out interesting sounds and then compose. I spent a lot of time playing, recording everything and sorting out the sounds afterwards. I must have used maybe five or six different toys – which are also used for my performances – that were given to me or that I bought. There’s even one that I found on the street.

There’s another super important element: humour. I wanted to be able to listen to the pieces and identify sequences that make me laugh. Since the sources were children’s toys, it was fairly easy to make funny sound arrangements by not modifying the original sounds too much. I’m doing this because, right now, I feel like approaching experimental/electroacoustic composition with a light touch. During my academic career, I had the impression that there was a very fashionable aesthetic that I call ‘post-apocalyptic’, rather aggressive, dark and intense. I’m not saying that I don’t like this kind of music, or that it’s not valid – on the contrary! But I wanted to create something different, without taking myself too seriously, a work that allows itself to exist without being embarrassed by its mischievous and playful character.

PAN M 360: Being an advocate of degrowth and a DIY approach for a long time, do you hope to see some kind of change in the music world?

Léa Boudreau: I think there are more and more artists who want to create and share a social message, or even some form of activism. I think that’s really encouraging. In terms of degrowth in particular, I obviously hope that the concept will come to take a more prominent place in people’s minds. I appreciate the work of artists who advocate this idea, and it can be done in many ways. Art is a great way to reach people, subtly, with committed ideas.

I think of the work of a fellow composer, Gabrielle HB, who brings forward ‘slowness’ as a kind of critique, against the productivity-rapidity-absolute efficiency vibe of our times. She creates some pretty subtle, sensitive and immersive stuff that requires a different kind of attention than what we are used to. You have to listen for real, and take your time. It recalls the ideas behind the work of pioneering artists like Pauline Oliveros or Hildegard Westerkamp. The music I compose generally adheres to a very different aesthetic than hers, but I find this artistic vision incredibly inspiring, and also very much linked to the concept of degrowth. I hope that this kind of project will become common in our musical world.

PAN M 360: If you can’t launch your album in a physical place, given the current circumstances, do you plan to follow the trend and do it virtually? If not, what will be the projects that will occupy your time?

Léa Boudreau: There was actually a release planned for the next few weeks. And… no, I don’t think I’m going to launch the album virtually. Or at least, if I make it something to present virtually, it will definitely take a different form from what was planned.

I was supposed to attend several events over the next few months, as many people were, so obviously I didn’t plan to have that much free time. Right now, I’m starting small projects, we’ll see if they survive or not. I’m working on audiovisual vignettes, animated and humorous, very lo-fi. For the moment, the only objective is to keep boredom at bay. Otherwise, I feel like composing a piece only with samples of Beyoncé. Maybe it’s going to happen now, we’ll see!