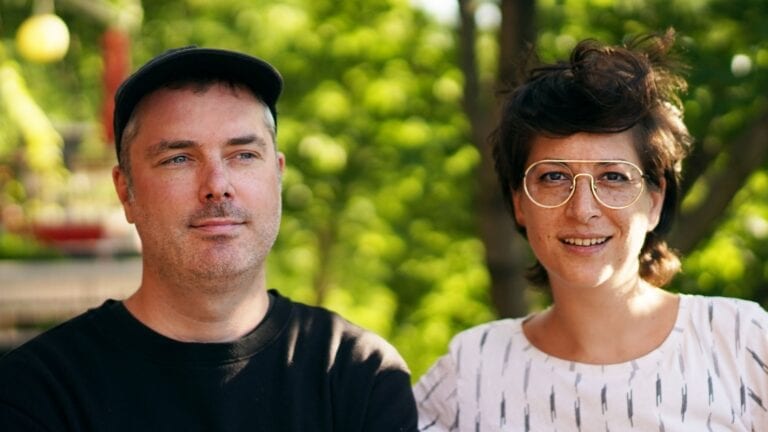 The new A/V show from he duo of Line Katcho and Guillaume Cliche that, on the first day of MUTEK’s 2020 edition, promises to be dazzling.

The 2020 edition of MUTEK Montreal gets underway this week, despite the current unfavourable context. The festival’s team has worked hard to put together an exciting program featuring primarily Quebec and Canadian artists. Among the spread, the duo GGROUNDD (Line Katcho and Guillaume Cliche) is attracting attention for their new A/V show, which promises to be dazzling. Here’s what they had to tell PAN M 360 before dropping the puck on the first day of activity.

PAN M 360: This is a particularly strange year – how has it affected your participation in the festival, and the creation of this new project?

Guillaume Cliche: We’ve been on hold for a long time without knowing whether we were going to perform in front of an audience, or only by streaming. We wanted to be able to present it to a crowd, because it’s not the same experience. GGROUNDD existed before the pandemic, we had been discussing it for about a year. With MUTEK approaching, it was the right time to do it, after Line presented INSURRECTION (2019) and IMMORTELLE (2018) at the festival.

Line Katcho: We made the proposal in January and we learned in March that LIMIT BRICK was accepted, just before the pandemic. It was stressful to see all the shows and festivals being cancelled one after the other. We thought the MUTEK was also going to go when Valérie Plante announced that all festivals were banned until August 31. The idea for this duo came after our collaboration on the radio show Lo Signal, on CKUT. We’re also together in other projects such as Paysage Primitif, but this is our first project as a duo.

PAN M 360: The show’s teaser is mouthwatering. What roles do you play in this promising project?

LK: Even though I’m a composer, I wanted to work with someone who would take care of the music entirely, so that I could concentrate on the video and perfect my techniques. For me, the music is the master of the show and not the visual, so I asked him to go for something intense. There’s an avant-garde side to what he does, and I knew it would help me take more risks.

GC: Line had told me that my first demos weren’t bursting with enough bite to go with her visual style. She loves it when the audience is on the edge of their seats. We’ve been meeting several times a week for the past two months, so we can adjust things easily.

PAN M 360: What kind of challenges did you want to take up with this new creation?

LK: I wanted to develop certain visual techniques that I had already used in my two previous pieces. I wanted to use certain elements more, or differently, and to go further in my approach. There is also a huge task of synchronization, since I am no longer alone, I don’t have control over everything. It’s Guillaume who takes care of the sound, and there is a certain amount of unpredictability in his music.

GC: The music will be quite experimental. Unlike my other projects, I wanted to bring together all my influences while avoiding making a pizza out of it. It will go through IDM, electroacoustics, noise, booty house, juke and even a bit of vaporwave. The challenge was to break up the structure while keeping a certain cohesion.

PAN M 360: Since everything came together quickly, what kind of stress have you experienced over the last few months?

LK: I think there is something exciting about being part of this special edition of MUTEK. In spite of the unknown, it’s an artist’s job to be able to handle intense deadlines. I would have cried if I’d only had two months to put this together solo, but the similar work ethic we had made this possible. We use the same vocabulary and are rigorous.

GC: As an audio technician, it was impossible for me to do my job in the last few months, so I was able to devote all my time to it. Because we went to school together, we know each other’s working methods. We interpret things in the same way, and that speeds up the process.

PAN M 360: Why did you choose the title LIMIT BRICK for your presentation?

LK: From the beginning, I saw the project as something very intense for us, which was going to push us to the extreme. I wanted to take on a major challenge and surpass myself while hoping that the audience would feel the same. So the idea of limitations emerged.

GC: We wanted to use the word “limit” to convey the gap between the minimalist elements and the more saturated moments of the show. The term LIMIT BRICK also comes from an audio dynamics tool called “Brickwall Limiter”, which allows us to set a maximum sound ceiling.

PAN M 360: How do you feel about having to play in limited conditions due to the pandemic?

GC: I had the opportunity to stream a concert during quarantine and I really enjoyed it. I was just as nervous as before a regular performance, but the stress dissipates once the first note is played. As for our performance at MUTEK, there will be more danceable portions, but I’m not sure if people will stay seated or stand up. I will be happy in either case!

LK: On my side, I am much more stressed. We’re losing some control over how it will be presented. If people listen to the concert on their mobile phone, it’s very different from being in the hall with a projector and a mega sound system. At the same time, I’m thinking that maybe 5,000 people will be listening to us. Of course there will be a slight disappointment that the hall will be less full. It’s often happened that the audience reacts during my performances, and that makes me feel good. I wonder if they will allow themselves more as there will be fewer people around. In any case, we’ve worked so hard that I am just happy to present this work, and I’m looking forward to seeing what all the upheaval this year will bring back to the artistic community.