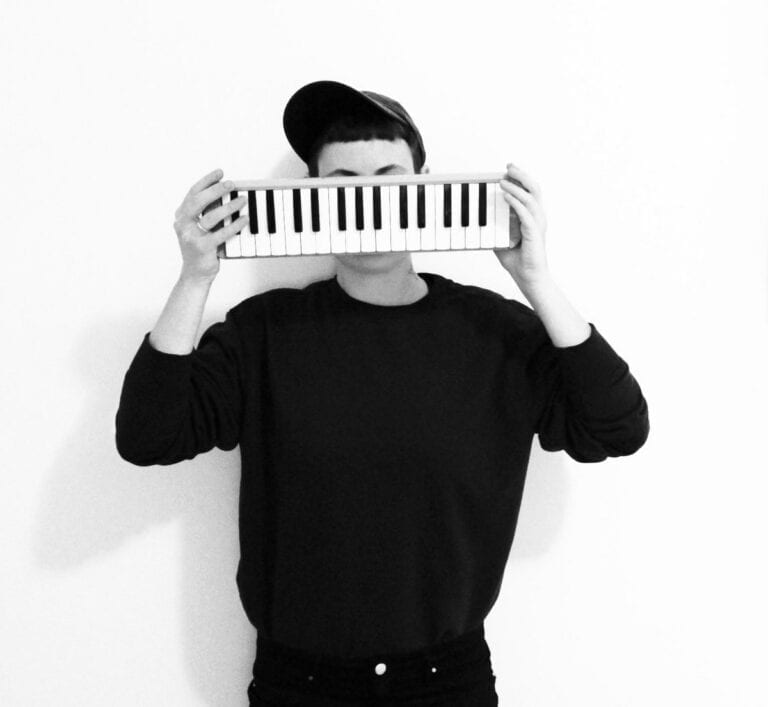 Whether in smoke-filled basements, in cultural centres, or at various festivals, Claude Périard’s music always finds its way. Having as much fun with militant pop under her pseudonym Claude L’Anthrope as she does creating sound installations and experimental music under her own name, the multidisciplinary artist is one of the jewels of Montreal. PAN M 360 spoke with her to discuss the intriguing concept behind her new album, Imaginaire sur réel.

PAN M 360: You’ve never been afraid to alternate between electroacoustic experimentation and committed electro-pop. Which of these two sides first appeared in your career?

Claude Périard: I started singing at the age of 12 in the singer-songwriter style, on guitar and piano. Later on, I set up a folk-jazz band, Les Sofilanthropes, in which I was the composer. I didn’t know much about experimental music at the time. Then I enrolled at the UdeM in digital music, mainly to learn recording and audio production techniques. That’s when I discovered a much broader and freer musical horizon that immediately appealed to me. I finally completed my bachelor’s degree in electroacoustic composition and although I continued to produce pop albums, these were strongly tinged with the influence of electroacoustic music.

My pop and experimental projects intermingled, resulting in some fairly experimental pop works and some slightly pop experimental works. It has to be said that for me, the interest of pop music is mainly to make people dance to political lyrics, which experimental music allows less. I find both disciplines to have complementary creative attractions.

PAN M 360: If your previous album VOIES highlighted your poetry, you opt for another concept on Imaginaire sur réel, in which you set your voice aside to work with data. How did you come to work in this way?

CP: I think the idea came when I learned the mathematical concepts behind acoustics, and then the discovery of conceptual works such as Guy Sherwin’s films, Alvin Lucier’s performances, or music composed on mathematical principles – John Cage, serialism, spectral music. I started with the piece “buildings/spectrum” in 2016, imagining a way to transpose the layout of downtown skyscrapers onto an FFT filter, so that the image determines the frequencies retained in the field recording of the photo.

A few months later, while looking at the line of a mountain on the horizon, I perceived a waveform and came up with the idea of creating a stamp identical to the relief of a mountain, which I was able to do by finding the topographic maps of Mount Royal and transposing the altitude data into code in the Python language. Four years later, I was up to five pieces. The general idea of the album is to use real data and transpose it to audio parameters, whether it’s Hertz, as a waveform, or as an FFT filter. The concept is certainly more interesting than the sound result, we’re more into conceptual art than music here.

PAN M 360: The five compositions present on the album come from variable data sources, could you briefly describe them and explain their meaning?

CP: The pieces came one after the other, with no logical link between them, although they are linked by a common approach. “buildings/spectrum” transposes a photograph of skyscrapers onto a filter, “mountain/waveform” uses the altitude relief of Mount Royal to create a waveform analogous to this curve. For my sound installation Espace lisse, I created a Python script that retrieved stock-market values in real time and assigned them to oscillators as frequencies. I recorded the result at different moments and finally assembled them to make “stock actions/harmonics”. For “temperature/frequencies”, I retrieved the maximum and minimum temperatures of each day of the year 2018 and gave them as Hertz to two oscillators, which creates a phenomenon of acoustic beats when the temperatures move further or closer.

It’s really thanks to the learning of programming that these ideas could emerge, because it seems to me that data music is essentially produced by coding. The most recent piece, “text/codes”, is part of a broader approach that has been with me for a few years, and which has produced small works along the way: typed poems in binary language, poems printed in barcode form, messages encrypted in Morse code in some electroacoustic pieces. It is mainly a matter of generating material by translating a text into different codes. A sound installation implementing this principle is currently in progress [Écryptures, soon to be in residence at the Daimon centre].

PAN M 360: What was the biggest technical challenge you faced? Is this data-mutation approach something you plan to continue exploring in the future?

CP: Most of the pieces were developed in Python programming scripts, which offers great possibilities in terms of audio. The only exception was the first piece I did, in a sound program with a midi oscillator and white noise, feedback, and glitch sample files. The biggest challenge was undoubtedly the programming itself, because I’m very new to this field despite the courses I took. I’ve wasted many hours on forums looking for answers!

In the future, I don’t think I’ll continue with similar projects, but the methods used on this album are very close to those used in my sound installations, where I have to program codes to put elements in interaction in real time. In my last project, the flow of road traffic on different motorways modulated the sound signal of a microphone placed outside the exhibition space, picking up the airtone of the city and diffusing it into the strings of a piano. Other projects of this kind are on the way, I’ve been selected by Perte de signal for their 2020-2022 “Emerging Project” cohort, and I’m preparing a sound installation that interacts with a bacterial culture under a microscope.

PAN M 360: It’s a strange time to launch an album, do you manage to stay the course artistically and morally even if you can’t organise a physical launch?

CP: I must admit that I sometimes experience moments of discouragement, when everything seems to be in vain. The album wouldn’t have been launched as a performance, because the medium doesn’t allow it, so I didn’t mind doing it only digitally. The current crisis has freed up a lot of time for creation, which has allowed me to do composition in my studio and prepare my next installations. However, it’s hard to project oneself into such an uncertain future, and I can’t imagine the continuation of these projects on stage accompanied by musicians, because all that seems to be gone forever.