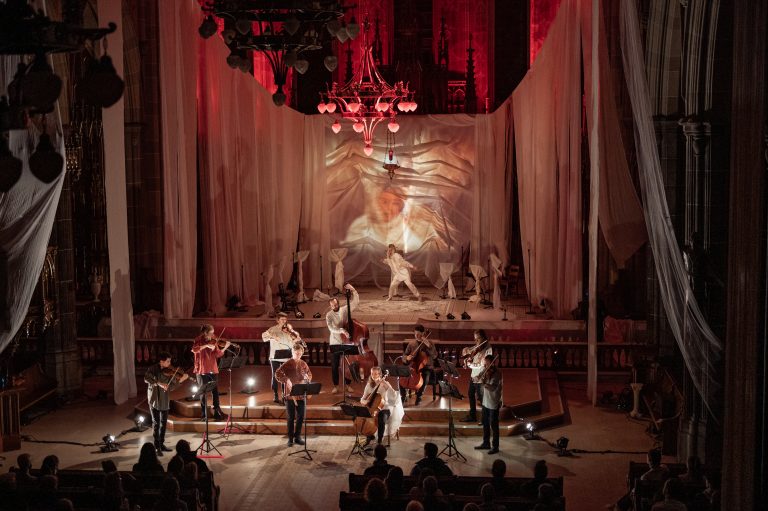 The Bewitching Rituaels of Collectif9

Rituaels by Collectif9 started with a high quality video project in 2019. The mystical concert/staging/music-visual experience including music by Hildegard of Bingen, Arvo Pärt, Nicole Lizée, Bryce Dessner, Jocelyn Morlock and Michael Tippett was to be presented to the public afterwards. However, a certain pandemic shifted the world’s priorities and the whole thing ended up on a shelf. Here we are in the world after, where the possibilities of the world before seem to be within reach again. That’s exactly what happened on Saturday, November 19 at Montreal’s St. Pierre Apôtre Church, where the Montreal string band was finally able to present the concept dreamed up by the band’s leader, bassist Thibault Bertin-Maghit, to a real audience. I’m happy to say that the real world was there, in numbers, and that what seemed enchanting on video was even more so on stage.

The staging was simple but tinged with mystique, with white veils covering part of the front of the church. The nine string players began this reinvented holy mass by slowly walking in from the sides of the altar, then moved to the middle of the aisle, before approaching the altar again, and finally finishing the symbolic/spiritual journey at the very back, just below the Cross. Lamps oozing a calm, intimate, and warm luminosity created a subtle atmosphere conducive to meditation. The choreographer and dancer Stacey Désilier, dressed all in white, acted as an allegorical guide to the emotional transformations through which Rituaels invited us to journey.

Of course, the final credit for the success of this classical 2.0 concert goes to the music. The programming was cleverly designed to take the listener through a dramatic arc that crescendos to a central ecstatic climax, followed by a soothing final decrescendo, but not without its doubts and uncertainty.

A feast for the ears, the eyes and the mind that we hope you will soon be able to enjoy, wherever you are in Quebec, Canada and the world.