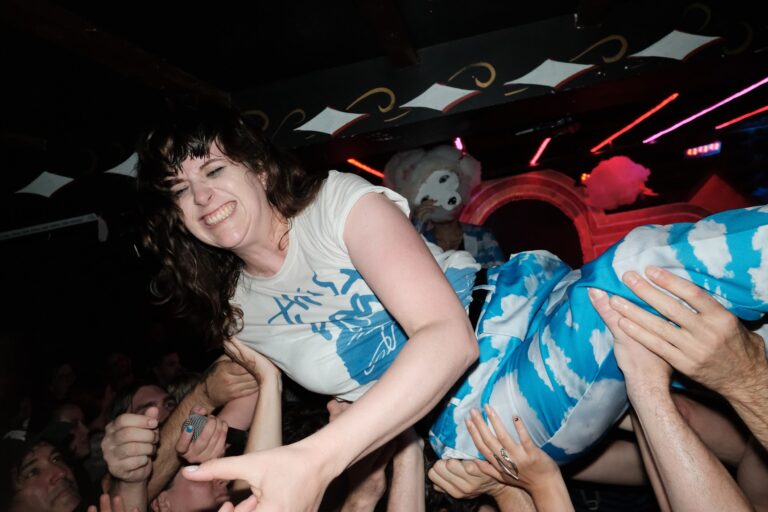 While the corporate big wigs and plastic, robotic, people headed to the clubs, close to two hundred scuzzy punks crowded into l’Escogriffe to witness the rebirth of PyPy—a Montreal psychedelic garage punk supergroup made up of members from Duchess Says, Red Mass, and CPC Gangbangs—one of the more batshit crazy punk groups to emerge from Montreal. This PyPy show, complimented by the hanging cloud props peppered throughout l’Esco’s room, was for the true heads who lived within the Montreal music scene pre-Covid; a show for the fans who knew about the 2014 release Pagan Day LP and know how it still holds up within the garage psych rock echelon.

I, however, am not a true head, and only learned of PyPy a month or so before this glorious live show. Fortunately, I discovered them after a friend played me the Pagan Day record in its entirety as we pre-drank the day away before this year’s Osheaga. As I heard the banshee-like growls of co-lead singer Annie-Claude Deschênes—a voice I know well from the Duchess Says era—complimented by in-the-red guitar wankery and disco-punk waves, I knew this was something special.

So, it’s quite serendipitous that this PyPy live show, (their first since Distortion 2017 and 2018 when they toured as PyPy/Duchess Says), my first PyPy show, was one of my favourites in recent memory. And I go to a lot of shows … It’s kind of my job.

To start off the night, I saw Crasher, a dance-punk three-piece, that seems to get better and better with every live performance. This is because frontman, Ash Wood, donning an ’80s black, shining dress shirt and smoke show eye makeup is a chameleon of the stage: shifting between a more subtle stage presence of someone like LCD Soundsystem’s James Murphy for the Crasher ballads, and the Descendents’ Milo Aukerman for the faster tracks. If that means nothing to you, then basically, Wood knows how to read the energy of a room, harness it, and throw it back as he bounces from the mic to synth, having his super tight band hold it all down.

PyPy took to the stage and the energy and anticipation of the room were palpable. Guitarist and singer, Roy Vucino, a main staple in the experimental/garage scene of Montreal, strummed a few fuzzy chords, wearing a two-piece sky blue cloud suit, and the crowd lost it. Annie took the mic and, also wearing the same cloud wardrobe (ah the hanging clouds make sense now) and people in the front row immediately began moshing. Her face was sometimes deadpan, grimaced, or absolutely manic, like that of a circus leader, leading a troupe of freaks through a march or dirge.

I know there have been many shows since Montreal re-opened, but watching PyPy’s performance, and the crowd’s reaction, filled me with glee. I joined a bit of the mosh, splashing around my pilsner in the process, and saw the big stupid grins of the punks, old and new as we whipped each other across the room. I’ve been in Montreal for two years and this was one of the first times I felt at home in a crowd of complete strangers. For us, the pandemic was nothing but a fleeting memory and at this moment, we knew it was time to lose our minds for some of Eastern Canada’s best psych rock. In fits of euphoria, the hanging clouds were punched, kicked, and ripped from the ceilings and PyPy was ushered back in for a three-song encore. Annie crowd-surfed (probably smacking her head on the ceiling once or twice), finished that last track and sat on the barwood as the rest of PyPy jammed a frenetic instrumental surf doom rock to close the performance.

I had no idea if this set from PyPy was only for nostalgia, but Annie announced that a song or two were from “the next PyPy” album.

All we can do is wait in anticipation.