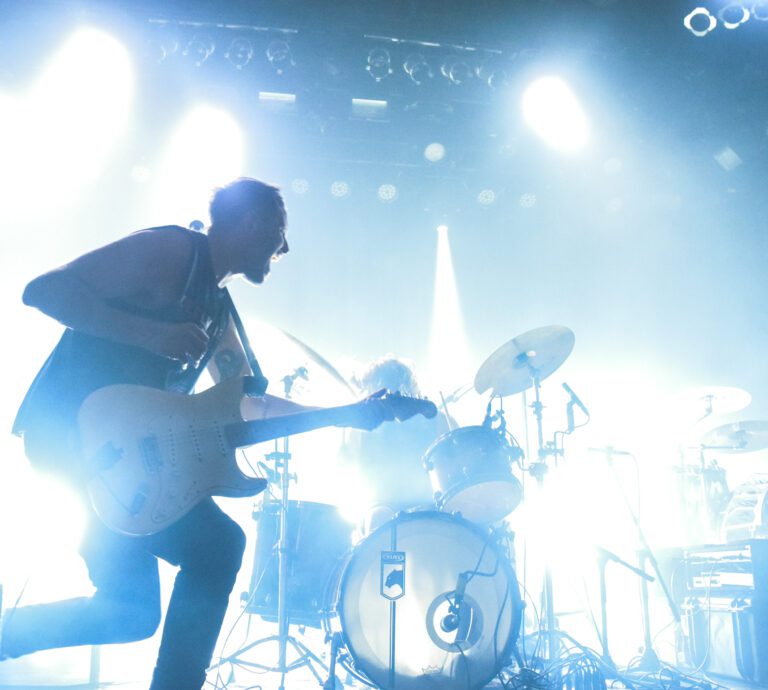 Strobe lights, thick fog, and other bright flashes consumed the stage of Corona Theatre as HEALTH, an American noise rock/industrial band from Los Angeles took to the stage. With sounds that remind of a computer, sizzling on fire, the three-piece unleashed a fury of dark and beautiful tracks, each with its own twisted melody.

At times the stage was plunged into darkness and a series of alabaster lights would synchronize with the mayhem of noise and distortion. There were sinister goth rock vibes from bassist John Famiglietti, who wielded his axe and an onslaught of on-stage pedals, and heavy metal feels as he headbanged, whipping his long hair back and forth. Fans of the Max Payne video games series should know that HEALTH composed most of the music for Max Payne in the third installment, and you can tell they are video games/lovers of anime as their opening music was the theme to Neon Genesis: Evangelion.

HEALTH are masters at creating friction within the atmosphere and had the crowd headbanging, good and sweaty. A highlight was near the end of their set when vocalist Leo Ashline of the experimental noise rock band, Street Sects (the opener of the show) screamed some terrifying lines during the closing song “Crusher.”

Next was Perturbator, a Paris, France dark synth wave project from James Kent, who also rose to fame for his collection of videogame tracks, like the powerful “Miami Disco,” from bloody the top-down adventure game, Hotline Miami.

Wielding an array of synthesizers and bass synths, Kent also played a six-string baritone guitar for the really heavy passages. The drummer was also a beast, synchronizing perfectly with Kent. Whether you were a heavy metal fan now into the synthwave genre or an old hardcore fan of Sisters of Mercy, you were losing your mind. Next to Carpenter Brut, Perturbator is one of the most recognized names in this somewhat unexpected wave of mainstream dark synthwave artists, and after seeing what he can do live, it’s for good reason.