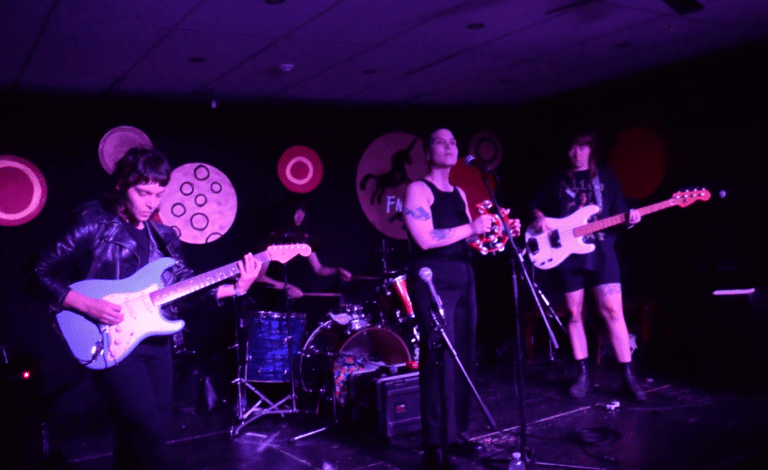 New to the Toronto Hand Drawn Dracula label is Bonnie Trash, a shoegaze/drone-rock project from Guelph, ON twin sisters Emmalia and Sarafina Bortolon-Vettor. These sisters played with a full band in Rouyn-Noranda’s Diable Rond country bar and they did not disappoint.

Guided by the ghost stories and presence of their now past nonna, Maria, Bonnie Trash has a haunting allure to them. I was transfixed by the manic guitar work of Emmalia, as a wall of noise made way for Sarafina’s banshee-esque vocal work.

At times it felt like a summoning was taking place as the group ran through a number of tracks from their upcoming debut LP, Malocchio, out in late October. The album’s concept was derived after Emmalia and Sarafina took the horror stories their Nonna would tell them as children. These stories stayed with the sisters, following their very backs as they both eased their way into music.

The dialect their Nonna spoke is Veneto, somewhat of a dying language so the act of writing these sonic ghost stories became a form of cultural preservation.

The live show was heavy and many of the riffs felt tangible as if you could pluck them out of the sky.