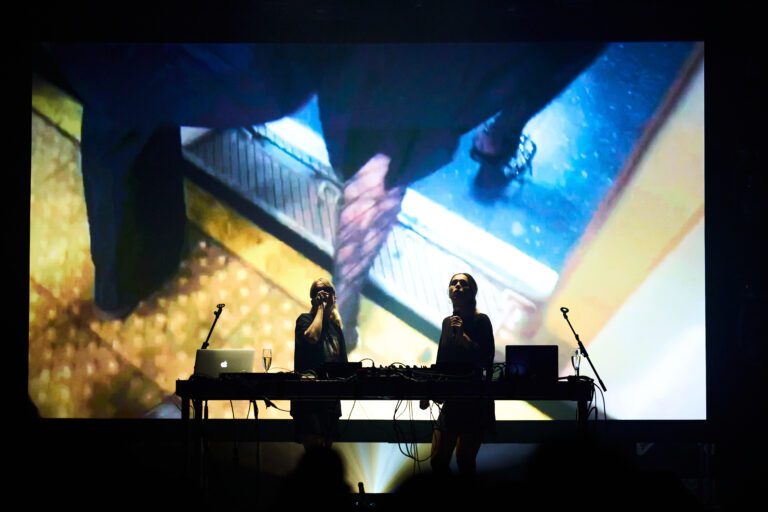 After a bizarre MUTEK performance featuring vegetable synths and snacking on said vegetables from locals, Mue & Katherine Melancon, another female DJ duo took the stage. They are called SMERZ, from Norway, and they’re about to unleash some chill beat, slacker, synth-pop.

It’s impossible to not talk about the stage presence of these friends Catharina Stoltenberg and Henriette Motzfeldt. They both looked like they just rolled out of bed, with messy tied-back hair and long dark t-shirts. One is wearing Crocs and the other is wearing winter boots. Basically, they look like they don’t care; like they forgot they had to play a show and put no plan into what they were wearing. And maybe that’s the point? There is too much seriousness in the electronic world and SMERZ is the antithesis. They’re almost anti-serious.

But as they harmonize with hazy vocals and some polyphonic drums kick in, you realize they are professionals and the lack of flashy costumes and visuals has to be on purpose. The visuals look like high school photos of friends but also feature random looped clips of people walking or even playing with their hair. It’s hypnotic, but there is no context to the song or if there is, we’re all missing it. I get the sense these videos are random as they feel like flipping through a stranger’s phone you found in the middle of the street and it adds to the indifferent atmosphere of the music.

It was an overall enjoyable show and the closest act that made you want to get up and dance in a euphoric and smoky daze.

Photos by Bruno Destombes for MUTEK