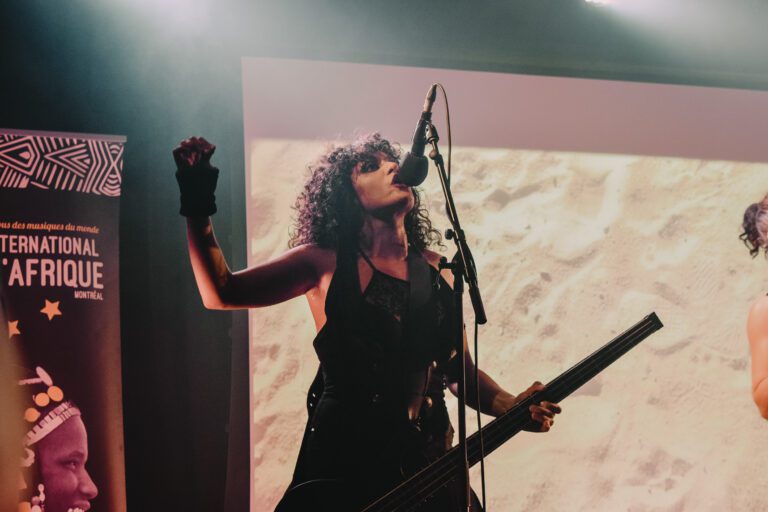 Ifriqiyya Electrique or the kind of possession I can get behind

There are four figures losing their minds on the Le Ministere stage—all dressed in a black modern goth kind of look—jamming to a heavy and gargantuan trance. A woman playing hand percussion chimes lets out a scream as if she’s calling down the heavens themselves, as another woman, rocking a Bellatrix Lestrange corset and haircut slaps her bass in complex arpeggios while rolling her eyes in the back of her head. The guitar player is drenched in sweat as he lays down some Middle-Eastern-sounding scales while the other hand percussion player jumps and hops over the stage. There are drums of course, pre-recorded, but still thunderous. This goes on for what seems like 10 to 15 minutes and the repetitive call and response vocals mixed with the heavy droning music are omnipotent.

This is Ifriqiyya Electrique, an experimental four-piece from Morocco who uses the ritualistic Banga—a therapeutic practice that the Black communities in South Tunisia used to invoke friendly spirits—and combines it with noise and dark industrial for an insular experience. It’s a bit like being at a metal or NIN show in the middle of the Saharan desert. Each song quickly blends into the next as each member of Ifriqiyya Electrique goes through their own form of sonic possession. Without any context, it could be considered a terrifying sight to behold, as it looks at times like a live exorcism. But it’s not. It’s an adorcism, a type of possession that is wanted by the human practitioner for satisfaction by trance.

I can’t understand the words, but these chants sound like they come from a place of pain and torment, cathartic releases for each singer to fire off into a cruel world. Each performer is easily a pro, and I later learn that the guitar player, Francois Cambuzat, and the bassist, Gianna Greco, frequently collaborate with the New York queen of post-punk, Lydia Lunch. At one point, Cambuzat lifts up his mic stand and begins playing and singing within the crowd. He moves around like a specter, sweating buckets, invoking the crowd to join in. It just might have been too much for a Thursday night crowd, but Cambuzat kept the intensity all the same.

Ifriqiyya Electrique is a project you could go on your whole life without knowing about, but I can promise you, their live show is like nothing you’ve ever experienced.