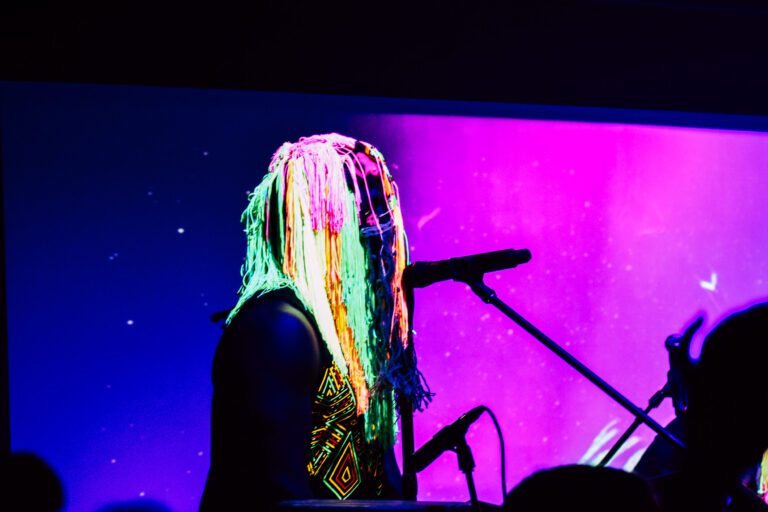 I arrive at Nuit D’Afrique’s first night, at 8:40 p.m. in Club Balattou and Lindigo, an eight-piece Maloya percussion group from Reunion Island, is already leading the club into a sweaty dance-filled frenzy. Fronted by the charismatic Olivier Arasta, in his golden geometric jacket, Lindigo has the crowd on their feet, jumping, spinning, and singing along to Creole vocal calls.

You wouldn’t guess it’s a Tuesday night based on how packed the venue is, but Lindigo clearly has fans here and even if they don’t they do now. It’s definitely a spectacle with the blending of conga drums and the West African kamelengoni and balafon (the West-African xylophone).

“Are you ready to go to Madagascar?” shouts Olivier. The crowd loses their collective minds and cheers.

I feel bad for the servers having to weave through the crowd, as everyone tries out their complex dance moves, attempting to match the beat of the drums. Although, the servers have grins on their faces as well.

This Maloya music genre originated with the slaves brought to work on the sugar plantations and eventually became a weapon of cultural resistance that was banned until the 1980s. Lindigo has made it its mission to preserve the sounds and spread them from generation to generation.

Down the street from Club Balattou, another man in an equally gold and geometric jacket is taking the stage at Le Ministère. He is announcing the opener with anticipation, a local Quebec DJ who goes by Oonga. The crowd is ready and soon a wave of funky and heavy drum and bass covers the venue. It’s loud and sweaty once again and some of the older crowd has no idea to react.

Oonga plays for 30-40mins until the headliner of the night, a three-piece from Bogota, Colombia, who goes by Ghetto Kumbé, takes the stage. The stage is darkened, only lit up by Ghetto Kumbé’s glow-in-the-dark masks that are connected to phosphorescent dreads. It reminds me of laser tag, but led by ritual monsters ready to ensnare the minds of their followers—and ensnare they do. There are two drummers, laying down some Afro-Colombian rhythms backed up by another creature laying down some gargantuan Colombian house music.

If you’ve ever been to a South American discotheque, think of that, but crank it up to 11. The whole room is shaking and a man races to catch his glass of beer as it buzzes off a table. Ghetto Kumbé also raps, quite well, as the two MCs play double duty on the drums and mic. My broken Spanish hears a call for revolution from the corrupt governments of the world, something we all can agree on. It’s Afro-Colombian futurism. Not bad for a Tuesday night.