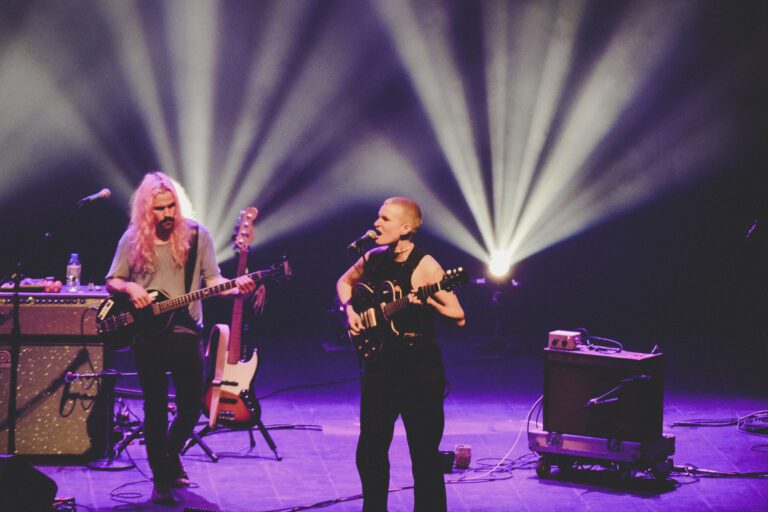 Big Thief reminds us why we love live music

Big Thief has always been an enigma to me. It’s a group led by singer-songwriter Adrianne Lenker, who has a penchant for mercilessly honest poetic songs that have enough lyrics to make your head spin but somehow come off as easy to remember. Not only that, but the two main songwriters, Lenker and guitarist Buck Meek are divorced and still not only remain friends but songwriting companions. Bands have failed for much less.

Perhaps it’s the blend of indie-folk, Americana, and sometimes straight-noise rock that draws in such as crowd to a Big Thief show, or maybe it’s experiencing a moment of vulnerability with such a great songwriter.

Either way, this was the case on Easter Monday as thousands poured into the L’Olympia venue, a building that’s decorated like an old Chinese exploitation movie theatre, right down to the piercing red on the walls and pillars centre stage.

I don’t think anyone expected an opener like Kara-Lis Coverdale (who is now based in Montreal) to open for Big Thief, but with her electronic cinematic soundscapes, the crowd was left in a state of rapture. Her set was borderless in terms of genre, with moments sounding like a Studio Ghibli film or a heavy, demonic reckoning.

She didn’t say a word but created and experienced the moments of sonic bliss with us. Although, there was a bit of chatter from the crowd during her set, and Big Thief’s Lenker made a statement about it a few days ago via Instagram. This was not in reference to only the Montreal show, but opening acts in general.

In the video, Lenker calls upon concert-goers to be “mindful if there is somebody performing and playing, to either listen or at least be quiet so that other people can listen, or go and put yourself elsewhere.”

Lenker has a point, but everyone was silent during the Big Thief set, except for the thunderous applause between songs. And the setlist was sublime, focusing on the new mammoth of an album, Dragon New Warm Mountain I Believe In You, but also some older material from Masterpiece and Capacity.

“How do you like Montreal?” a fan shouted after the first song “Black Diamonds.”

Lenker quietly responded “I love Montreal,” and proceeded to tell a story in a hushed voice about when she and four friends drove from Minnesota to Montreal in a few days. They each took turns driving and only gave themselves a day in the city, leaving them to pack “everything into one day.”

I saw Big Thief once at Levitation in Austin and it was good, but it doesn’t hold a candle to the Montreal show. This set was way more electric, both Lenker and Meek switching between guitars between songs for more interesting tunings and sounds. They are also virtuosos at almost a-tonal guitar solos that come from pure energetic feeling. Lenker especially was amazing to watch as she played a bat shit, distorted, seven-minute solo movement during “Not.” This is why you go to see live music: to relive your favourite songs, but also see the artists surprise themselves live.

The set ended with “Certainty” from the latest album, but Big Thief wasn’t done as their encore was four songs long. It began with the most playful track “Spud Infinity,” featuring Lenker’s little brother Noah on mouth harp, and ended with, of course, the hit indie burner “Masterpiece,” but then also “Mary.”

It was a live show for the history books and even had one brand new song “Happy With You,” meaning Big Thief probably has a new project, album, or EP in store. Even after they just released Dragon New Warm Mountain I Believe In You. Talk about prolific.