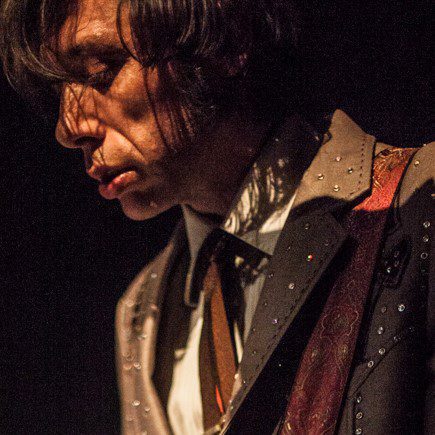 Dallas Good passed away on Thursday, February 17, 2022. He was 48 years old. The Grim Reaper hadn’t been so cruel to Canadian rock since Gordon Downie died at age 53, in 2017. Cause of death: newly diagnosed coronary disease. Dallas Good and his brother Travis formed The Sadies in 1994 with bassist Sean Dean and drummer Mike Belitsky. At a young age, Dallas fell into the roots music potion concocted by the legendary Good Brothers, his father Bruce, and his brothers Brian and Larry. For musicophiles fond of cutting-edge rock where Americana becomes Canadiana, Dallas Good was a true icon. His voice, which exuded a pastoral warmth and charm, was irresistible and instantly recognizable. His fingers produced pure, haunting vibrations. Praise is pouring in from everyone from old classic-rock seadog Randy Bachmann to multi-instrumentalist and songwriter Richard Reed Parry (Bell Orchestra, Arcade Fire), who produced a Sadies album due this spring, from which the single “Message to Belial” (see video below) was recently released.

In almost thirty years, Dallas Good and the Sadies have acquired a rare status among rock bands: that of a creative entity that is both superior and prolific, as well as a backup band that the whole scene is after. The Sadies have been regular musicians or collaborators with the formidable Neko Case, the late and gritty R’n’B minstrel Andre Williams (one must listen to their album Red Dirt), Jon Langford (The Mekons), John Doe (if Country Club isn’t one of the best Americana-rock albums of the last 20 years…) and the aforementioned Gordon Downie (And the Conquering Sun). On February 3rd and 4th 2006, The Sadies had organized a sort of Will the Circle Be Unbroken or Last Waltz without farewells at Lee’s Palace in Toronto. Garth Hudson, the eminent survivor of the real Last Waltz with his ever so magically nimble fingers, participated as did Jon Spencer, André Ethier (The Deadly Snakes), the Good Brothers as well as Margaret Good–Dallas and Travis’ mom–, Kelly Hogan, Gary Louris (The Jayhawks), Neko Case and a host of other musicians including Blue Rodeo and Steve Albini. In 2010, Garth Hudson returned the favor by inviting them to the concert that became the album Garth Hudson Presents: A Canadian Celebration of The Band. Dallas and his colleagues had the honor of accompanying Neil Young on “This Wheel’s On Fire” and performing a heartfelt version of “The Shape I’m In”. The Sadies’ four friends were also de facto members of the Canadian supergroup The Unintended, along with Rick White (Eric’s Trip, Elevator) and Greg Keelor (Blue Rodeo).

One would be remiss if we didn’t point out that Dallas Good was the epitome of rock coolness at its finest: with a slim, trim figure and an angular, slightly sinister-looking face, Good was always dressed in an impeccably tailored suit, often of the Grand Ole Opry variety. The man, who looked a bit like a semi-ironic western mortician character, was humble, quiet, affable and, above all, devilishly talented and inventive. With his brother Travis and their rhythm section, they created their own musical genre by hybridizing country, bluegrass, psych-rock, blues, punk, rock’n’roll, surf-rock, rockabilly and a few other sub-genres. Over the course of their existence, Dallas and the Sadies have earned the admiration of music lovers and rock musicians both north and south of the 49th parallel. However, it is on the scale of Canadian rock that their contribution is exceptional: like Blue Rodeo and the Tragically Hip, they have served as a liaison for countless musical projects with a host of musicians of various stripes. Dallas Good’s major contribution to the world of rock music will remain, of course. But the passing, in his prime, of a musician-creator like him can only be infinitely sad.