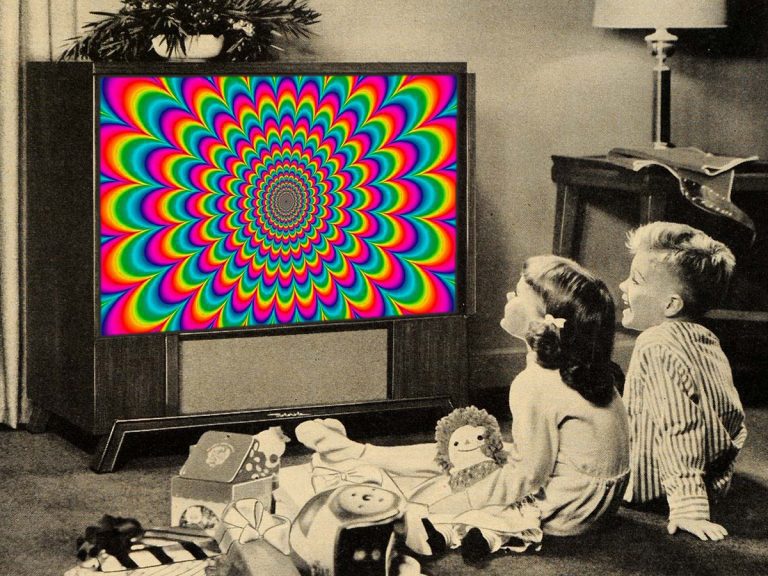 2021 was a great year for video production, despite the circumstances. Directors showed inventiveness and audacity in pursuit of an original clip, despite the constraints. As for the artists, it was an additional opportunity for them to remain in the public eye; one could even say that the video has become a more than essential tool since the beginning of the pandemic. PAN M 360 has selected 21 videos that have made their mark this year, whether for aesthetic or ethical reasons, or because they are simply enjoyable to watch.

Here’s a clip where, apart from a few explosions here and there, the spectacular is in the details: open your eyes, music fans, and put this on your 396-inch TV! The rock-pop-disco assembly Bon Enfant takes us back to church, the one in the parish of Saint-Pierre-Apôtre in the borough of Ville-Marie. Director/editor David Bourbonnais and cinematographer Nathan B. Foisy take advantage of the stained-glass windows, pulpit and other architectural elements and ornaments. The celebrant Daphné Brissette and her flock Guillaume Chiasson, Étienne Côté, Mélissa Fortin and Alex Burger dance, relax and stroke the Casavant organ under the neo-Gothic arches, dressed in white as if for an unconsummated wedding. Then we find ourselves in the forest with a horse, Alex Burger pulls something that looks like a calf’s heart from an urn. It’s Catholic, it’s pagan, it’s the best. (Luc Marchessault)

Colombia’s monarchs of la nueva cumbia put out several gorgeous videos for their 2021 album Deja, indulging in their lush local wilderness. The best is the panoramic envisioning of “Agua”, a standout track on the record as well. Alone in the jungle, singer Liliane Saumet imbibes a mystic cocktail, and awakens to a communion with the sacred spirits, in the form of a riotous floral costume party. (Rupert Bottenberg)

A song that was released a few years ago in Somalia and generally played at weddings, but which became an international success in 2021. Nimco Elmi Ali sings an ode to love in four languages: Somali, English, Arabic and Swahili. “Isii Nafti” was shared online by Black American personalities such as Cardi B and Trevor Noah, who used their fame, implicitly, to shed light on this little-known artist across the Atlantic. This viral buzz was a nice way to honour a Somali woman and a whole part of African culture, long—and still—ignored by the Western mass media. (Salima Bouaraour)

“Who’s the boss?” asks Marie-Gold, the troop leader. “Marie!” the six scouts who accompany her answer in chorus. In this video, the MC offers us her vision of the power trip, with her own symbols of success. No drugs are sold, but rather biscuits prepared with gusto by grandmother scouts, and alcohol is replaced by glasses of milk. But rest assured, the story always ends the same way: the money goes into the boss’s pocket. Marie-Gold takes advantage of the contribution to become the owner of what seems to be a key to the city, presumably Baveuse City? Story to follow in February 2022. (Elsa Fortant)

To like a video, you have to like the song. So here’s not only a superb track from the latest album by Nigerian-born British artist Little Simz, Sometimes I Might Be Introvert (which easily made it into our Top 100 of the year), but also to a remarkable video. In the five minutes or so of “Point & Kill”, director and photographer Ebeneza Blanche (Elle, Harper’s Bazaar, Nike…) takes us to Lagos with Little Simz and Obongjayar, another British artist of Nigerian origin. By incorporating often still or slowed-down images, close to a very colourful photography, the clip moves from lightness to a much more political territory, but still in a very artistic way. “Point & Kill” is a visual and sonic experience that celebrates Nigerian culture with style, a polished work of impeccable aesthetics. (Patrick Baillargeon)

There’s a flavour of nostalgic yearning in this track from innovative Toronto jazz unit BADBADNOTGOOD, and it’s matched most accurately by director Winston Hacking’s fascinating technique. He integrates found images physically into natural backdrops, toying with congruence and contrast, while hinting at a sense of the tangible that’s fading in the digital era, a feeling further evoked by the weathered 8mm-film filter. (Rupert Bottenberg)

Released in the summer of 2021, ‘Til I Start Speaking is the first full-length album by the young American singer Kate Morley. Her subtly arranged ballads, influenced by folk, soul, jazz and electro, are well served by a heartfelt performance. Written after a break-up, “Eliogy” bears the marks of pain, both the pain you feel and the pain you make the person you are leaving feel. The video that accompanies this song is remarkable. To illustrate her point, Morly unrolls a ribbon inside her mouth. One by one, the words come out, leaving their marks on the singer’s cracked lips. (Steve Naud)

After a number of impressive videos in a deadpan surrealist mode, Swedish DJ Salvatore Ganacci switches gears and enlists the animation studios Goono and Truba to fabricate an explosive, hilarious homage to Japanese anime and video games. A feisty girl and her fearsome friend, an enormous disembodied hand, confront their foes. The fracas that ensues is a dizzying montage of colourful mayhem. (Rupert Bottenberg)

British band Snapped Ankles released a new album in July, their third, aptly titled Forest Of Your Problems. If you’re not familiar with them, legend has it that Snapped Ankles are wild men of the woods, living in the branches and looking like a pile of leaves or bushes, who have come down from their trees to play danceable komische post-punk with a mix of synthesizers, guitars and foraged instrumentation. Daisy Dickinson’s psychedelic video shows the entire Snapped Ankles crew—The Business Imp, The Cornucopian, The Nemophile and The Protester—singing and dancing in the forests of Sussex in several vignettes. (Patrick Baillargeon)

The results have come back and the diagnosis for “Hématome”, from French electro sophisticates L’Impératrice, is takotsubo cardiomyopathy, also called broken-heart syndrome. Deftly directed by Roxane Lumeret and Jocelyn Charles for Studio Remembers, the video for the track is a medically fixated animated fairy tale that captures heartbreak in a suitably strange and bewildering way. (Rupert Bottenberg)

Hot Garbage
Sometimes I Go Down

It’s all about the colours in this music video. With the four recurring panels, each with its own specific vibe, it kind of looks like Wes Anderson made a ’70s exploitation film. In two panels we have private detectives on the phone speaking with the people in the other panels. In another, a man is gorging himself with a splendour of dishes, also on the phone. In another, a woman is reading tarot cards while on a vintage phone. As the heavy fuzz of Hot Garbage consumes the frames, the people begin disappearing after an entity takes over each panel. The video is low-budget, tells a fragmented story, and keeps your attention. (Stephan Boissoneault)

The lyric video is generally a cheap and easy placeholder for a song’s forthcoming “official” video, and/or cheap and easy click-bait to fuel a hike up the charts, but sometimes they’re works of art in and of themselves. The animated collages for The Stones’ Their Satanic Majesties Request, for instance, those were great—and so is this hectic optical overload for “Dodonpa”, a manic jam even by the standards of the saccharine sorceress of J-pop. (Rupert Bottenberg)

In a long, still shot of flourishing nature, Kristin Hayter, alias Lingua Ignota, appears and disappears, sometimes prostrate, sometimes inquisitive, searching for the path to repair. But this path means rupture, if not death. “And all that I’ve learned is everything burns,” she sings with spite, as red smoke envelops deserted places, pastures and houses. Her purification rituals thus become confessions of surrender. The first poignant extract from the album Sinner Get Ready, the clip was entirely directed, conceived and edited by Hayter. (Geneviève Gendreau)

Shot in a sort of grey-blue monochrome, the desolate landscapes of the video accompanying the release of soprano Sarah Aristidou’s excellent album Æther are in keeping with Edgard Varèse’s Un grand sommeil noir, a piece not often performed but possessing a rare dramatic and suggestive intensity. We see in it what inhabits us most powerfully: a dreamlike landscape? A waking mystery? The ravages of climate change? Exoplanetary scenery? Superb. (Frédéric Cardin)

Welcome to the parallel universe of Vertige Records! Behind the camera is Adrien Taret, the promising young director-editor who crafts the videos for the collective (URUBU, MELVIN, and MOLZK). The team takes great pleasure in reappropriating the aesthetic codes of the 1990s—Blade posters stuck on the wall, wraparound shades, gaming references and flashy colours. We follow the day of Vinz, a technoboxing enthusiast, whose assistant films his every move, up to a basement battle against his nemesis… (Elsa Fortant)

For a little over a week, director Rocco Rivetti and cinematographer Gilles O’Kane shot the clip Letting Go in Lubbock, Texas. Artist Shonray Nichols added the final hand-drawn animation for the final scene. Here is what Rivetti told us about the video: « I wrote a simple narrative script where the character from the album artwork, a man in corpse paint standing in front of a Big Rig restaurant, burns his worldly possessions, and returns to heaven as an angel. I drew inspiration from William Blake’s Paradise Lost, as well as the profound pagan spirituality of early Norwegian black metal bands. Ideas like a restoration of faith, transmutation through fire, and a possible reversal of the fall from grace were really resonating with me at the time, and seemed to fit the emotional timbre of the music well. The main goal was to take a character that could be viewed as flippant or silly, and to instead treat them with the same respect and humanistic spirituality that the songs on Hayden’s record share ». (Isabelle Marceau)

A Place to Bury Strangers
End Of the Night

After multiple lineup changes in 2018 through 2020, fans had no idea what was to become of A Place To Bury Strangers, but leader Oliver Ackermann came back with a new husband-and-wife band and a video in late 2021. The music video is really just a live session of the “End Of The Night” single, but with some super-imposed, drugged-out video wizardry. It begins with Oliver playing a quick synth line until the bassist smashes the instrument into pieces. Soon after, floating bodies and heads fly across the screen as more and more sonic distortion cloaks the environment. It’s dirty and very punk rock. (Stephan Boissoneault)

Musically, “See My Shadow” may evoke Diamanda Galás and Laurie Anderson having lunch with Lydia Lunch, or Xarah Dion and Lana Del Rabies jamming to the theme from American Horror Story. Visually, one wonders if the heroine has covered her face with papier-mâché, latex, clay, or human flesh. This video for Kee Avil (Vicky Mettler in real life) makes us think of a trio of horror films: Eyes Without a Face, The Texas Chainsaw Massacre and Goodnight Mommy. “See My Shadow” is a foretaste of the album Crease, which Kee Avil will release on March 11, 2022. (Luc Marchessault)

The second single from the new album Yablonnyj Sad, “Govorit Moskva”, which can be translated as “Moscow speaking”, is a solid musical and visual indictment. Released on May 1st to celebrate spring and International Workers Day, this skilfully orchestrated and performed video features a parade and military training course, a demonstration and a procession. As always, the choreography is inventive, this time made of a succession of sequence shots, making us part of this jagged parade. A true disruptive force, Shortparis rests on an inextinguishable resolution that Nikolay Komyagin exemplifies, with a voice and a presence from which nothing can escape. (Geneviève Gendreau)