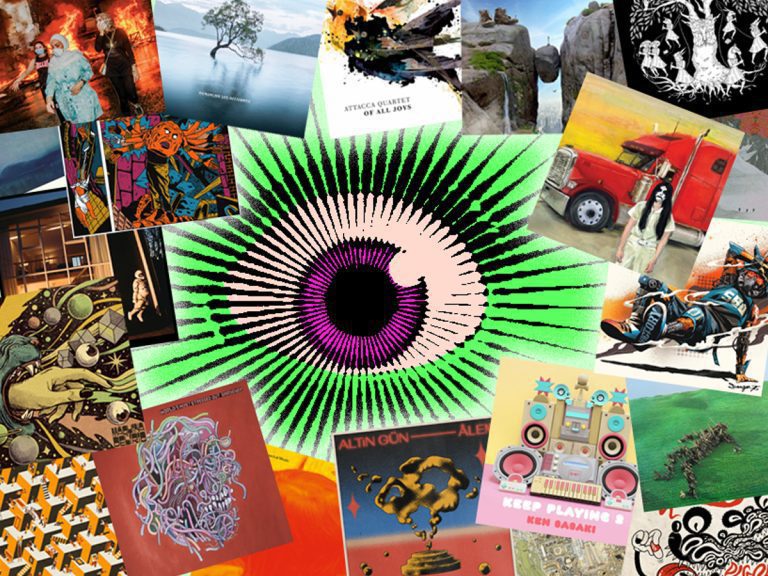 One of the pleasures of owning vinyl albums is being able to study the cover from every angle while listening to the music. Sometimes the cover is so captivating that you forget about the music; sometimes the content is far less interesting than the container (how many times have we been fooled!). The best, of course, is when both the music and the artwork are excellent… unforgettably so. Among the hundreds of albums with amazing covers that passed through our hands in 2021, here are 20 that caught our attention.

Swedish visual artist Mattias Adolfsson‘s hyper-charged drawing evokes what could be the inside of a computer (in keeping with the wink of the album‘s title) or an ultra-messy space studio, a sort of joyful mess in which one can lose oneself for hours, carefully examining every small detail. River Cuomo, leader of the American pop-rock band and a great fan of comics, is said to have fallen under the spell of the Swedish artist’s drawings during a visit to a comic book shop. (Patrick Baillargeon)

To illustrate the cover of Remercier les accidents, pop-folk-rock-punk songwriter Noé Talbot has chosen a willow tree with a bole submerged in the waters of Lake Wanaka, in southern New Zealand. This resilient tree must be featured in thousands of photographs; the one Noé chose was taken by Belgian photographer Loïc Naessens. It’s hard to find a more perfect match between the plant, the aquatic, the mineral and the celestial. “I won’t promise you much except the present”, sings Noé on “Pour l’instant”, the tenth track on the album. That’s what this willow tree is telling us: only the present counts. (Luc Marchessault)

Based in Amsterdam, leading contemporary Turkish psych-rockers Altin Gün are no strangers to inviting yet freaky hallucinatory imagery on their record covers–see also their other 2021 album, Yol. The indie release Âlem, a Bandcamp exclusive, boasts a mysterious image by architecturally-inspired U.K. designer Alexander Khabbazi, and merits mention as well as a special fundraising project, with proceeds going to the worthy environmental initiative EarthToday. (Rupert Bottenberg)

You know that sensation of hazy simplicity when you have to look at something more than once to decipher its meaning? That’s what this album cover is. Simplistic, yet confusing. We have a double-story flat with open windows against a dark background. On the right, a lonely astronaut or vintage motorcycle driver (it’s unclear) is in mid-jump in trainers. It’s like a scene from a play or a page in an IKEA catalog. You can also try to derive a thematic link to the songs, but really, it’s just a cool piece of abstract photography that sticks with you. (Stephan Boissoneault)

To our knowledge, no deals with the devil were made by this duo from the wonderfully named town of Florianópolis, Brazil, regarding their album of trippy psych-rock tangents, Mefistovalsas. A deal was however struck with artist Pedro Correa, who delivered all his favourite elements—eyeballs, outer space, jungle cats and geometric forms. This would work great as a blacklight poster, wouldn’t it? (Rupert Bottenberg)

After the vibrant and psychedelic iconography of their last album, Real Life, with its electro sounds, the Attacca Quartet’s second album of 2021 is presented in a more sober and refined visual style that echoes its minimalist repertoire. The palette evokes the emergence of shadow into light, while the illustration of the bird, by Anja Hoppe, evokes the aerial side of the repertoire, but also the newfound freedom of being able to create and play together after months of confinement. (Alexandre Villemaire)

This cover, like the tracks on Bright Green Field, is rich in content. The lush green field, the garbage bins forming a figure, the bright blue sky—all elements that jump out at you. It is both a disarming image in its simplicity of composition and engaging in its complexity of elements. Also worth mentioning is the superb mix of blue and bright green with a sad grey, giving the impression of a rotten candy from the inside. An album doesn’t have to have only excellent audio content, the packaging can also be superb! (Louis Garneau-Pilon)

Tokyo ten-piece Super Break Orchestra bash out the kind of brass-heavy funk that’s engineered to accompany clashing breakdancers. Who better to create the artwork for their debut EP than Dragon76, who mixes American street-art style and hip-hop graffiti traditions with the anime, video games, and folk art of his native Japan—oh, and a pronounced samurai sensibility (no wonder he’s winning art battles in his adopted home, NYC). (Rupert Bottenberg)

Last year we were shocked to learn that the great and beautiful Marianne Faithfull had contracted covid. Despite her advanced age and frail health, she survived the virus and this spring released She Walks in Beauty, an album in which, against a spellbinding soundscape created by Warren Ellis, she recites the poetry of the English Romantics—Byron, Hood, Keats, Shelley, Wordsworth, Tennyson. The booklet accompanying the physical edition of the disc is magnificent. Paintings by the British artist Colin Self are added to the text of each of the poems. The contemplation of these impressionistic images completes the listener’s experience by immersing him or her in a poetic universe of great splendour. (Steve Naud)

Vistas
What Were You Hoping To Find?
Retrospect

While viewed as a thumbnail, the cover of the second album by effervescent Scottish pop-rockers Vistas seems a simple, pleasing geometric pattern. Zoom in and there’s an awful lot going on in the artwork by Colorado designer Rosston Meyer, founder of Poposition Press, a master of the modern pop-up book who brings that instant-3D technique to the gatesleeve jacket of LP edition of the record. (Rupert Bottenberg)

Dream Theater
A View From The Top Of The World
InsideOut

It was only after I identified the author of the illustration that I understood why it had caught my attention. In addition to creating Dream Theater’s covers since Octavarium (2005), Canadian artist Hugh Syme’s surrealist style can be seen on hundreds of albums since 1975 (Rush, Bon Jovi, Iron Maiden) and even advertisements (Sensodyne toothpaste!). To illustrate the title of the progressive metal band’s 15th album, Syme chose Kjeragbolten, a boulder on Norway’s Kjerag Mountain, as the top of the world. (Christine Fortier)

A “retro wave sound that is not merely nostalgic” is how Tokyoite Ken Sasaki defines his congenial pop, sweet and light with a flavouring of upscale funk, chiptunes, and Japan’s own “city pop” of the ’80s. It’s well matched by the cover art by Shinsuke Koshio, founder of the SUNDAYVISION design studio, which looks like it sounds great—and maybe tastes great, but that could just be a voracious holiday appetite speaking. (Rupert Bottenberg)

Jerusalem In My Heart
Qalaq
Constellation

The women can’t hide their dismay behind medical masks. There was the explosion in the port of Beirut in the summer of 2020, an enormous cataclysm. Lebanon was already plunged into a deep crisis of corruption, economic misery was getting in the way and the hope of reconstruction took a hard blow. Led by Lebanese-Canadian Radwan Ghazi Moumneh, the multi-disciplinary vehicle Jerusalem in my Heart takes the hit in this excellent, collaborative, international show of solidarity with a deep Lebanese anxiety (Qalaq) as the creative backdrop. The photo report selected for the album cover could not have been better chosen to express the state of affairs and the music that it inspires. (Alain Brunet)

Chad Vangaalen
The World’s Most Stressed Out Gardener
Flemish Eye

Calgary’s Chad Vangaalen is long since a familiar name in Canadian indie music—he’s been at it for a couple of decades now with his idiosyncratic folk-rock—as well as illustration and animation (recall his incredible 2020 video for Sun Ra Arkestra’s “Seductive Fantasy”). The spaghetti-faced weirdo on this album, one of several Vangaalen releases this year, is a good example of his psychedelic cartoon style, equally silly and sinister. (Rupert Bottenberg)

Gazelle Twin has had one success after another. Her talent is also evident in her ability to surround herself with equally brilliant artists. This magnificent album is the logical follow-up to the London concerts where she performed with the female electronic drone choir NYX, in reworked versions of some of the songs on her 2018 album Pastoral. The work of Italian illustrator Elisa Seitzinger, with its exploded and casual medieval bestiary, couldn’t be more fitting for Deep England. The cover design is by Jonathan Barnbrook, who also designed David Bowie’s last album, Blackstar. (Geneviève Gendreau)

This is the cover of my year 2021 because it’s everything I love about Montreal: the beautiful, unexpected encounters, the ones where you let yourself be guided by the energy of the city, its people, its talents and its music. This cover is the one you absolutely want to own after having shed tears of happiness at having had the chance to discover a musical gem. This cover is the one you want to keep as a souvenir, like a Polaroid you would take to immortalize forever an unforgettable journey—such as the one I made while listening to Population II under the Van Horne viaduct, one day in November 2021. (Salima Bouaraour)

They may be from the exact middle of the planet, but Ecuadorian noise-rockers Infiltro take their abrasive racket to extremes. The cover of their latest record, Disforiais blessed by the charming presence of a pill-popping punk-rock rat, an archetypal image that looks like iot could have come from the dripping pen of underground comic legend S. Clay Wilson, or ’90s grunge graphic maestro Savage Pencil—but it’s in fact by cartoonist and illustrator Paco “Afromonkey” Puente, founder of the Azno Cómics anthology. (Rupert Bottenberg)

Describing himself as a “non-emergent” artist from Amarillo, Texas, Jonathan Phillips used a photo given to him by Hayden Pedigo as inspiration for the album cover. He says it was one of many sarcastic photos of Pedigo dressed in streetwear. Phillips turned it into an oil painting on a foot-square wooden panel, and from this work the album cover was created, provoking by its colours and the strangeness of the character. (Isabelle Marceau)

A trio from Reims, France, Tendinite deliver lo-fi garage punk, crude yet effective, as demonstrated by their latest album, Neither/Nor. The multi-armed mutant of the striking cover artwork is by Val l’Enclume, a graphic artist whose absurdist, apocalyptic style has earned them an association with the longstanding, Marseille-based silkscreen art gang Dernier Cri. (Rupert Bottenberg)

The second album on Cuneiform for the ten musicians of the French band Ghost Rhythms, led by drummer Xavier Gélard and pianist Camille Petit. A strange cover, by Jonathan Martin, which isn’t particularly related to the theme of the record (distancing and its remedy, telepathy), but it has an accidental, or involuntary, character that has a certain charm. The music is a kind of jazzy progressive rock that has affinities with Soft Machine or Miriodor. To be discovered. (Réjean Beaucage)